Far more African-American than white voters have suffered a reduction in their family’s income due to the coronavirus outbreak, according to a poll for the Financial Times that underscores the racial disparities of the Covid-19 pandemic.

The survey showed 74 per cent of black voters reported a financial hit compared to 58 per cent of white voters. It also found that more African-Americans had lost their jobs since the outbreak began, highlighting the growing economic inequalities at a time when Americans are protesting against the killing of George Floyd.

The monthly survey of likely voters for the FT and the Peter G Peterson Foundation found 25 per cent of black respondents had been dismissed or furloughed since the start of the recent lockdowns, compared to 19 per cent of white respondents.

The findings of the latest FT-Peterson poll, conducted between May 20 and 26, come as more than 100,000 Americans have died from Covid-19, a virus that has disproportionately killed black and Latino Americans.

Polling concluded a day after Floyd, an African-American, was killed in Minneapolis after a white police officer knelt on his neck, setting off a wave of protests that has swept US cities nationwide and revived long-simmering tensions over race in America.

The FT-Peterson poll highlighted how the deadly coronavirus had disproportionately taken the lives and livelihoods of black Americans. 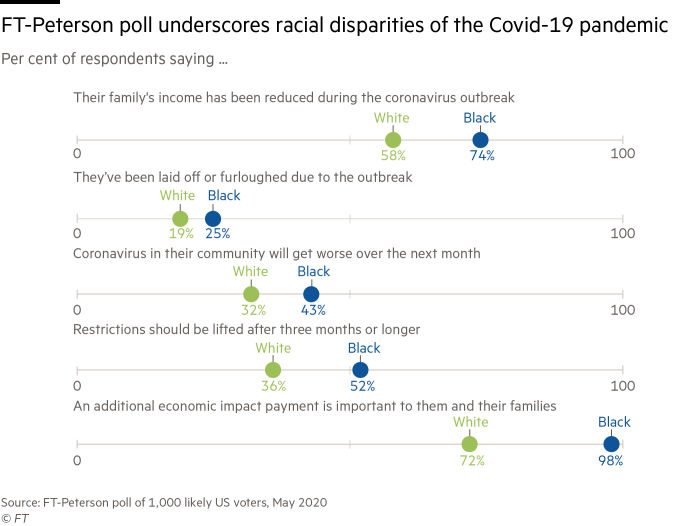 The survey showed black Americans were more likely to be pessimistic about both the public health crisis and the potential for an economic recovery than their white counterparts. Forty-three per cent of black voters said the coronavirus outbreak would get worse in their community in the next month, compared to 32 per cent of white voters.

African-Americans were also more likely to support a slower reopening of non-essential businesses, with 48 per cent of black voters saying restrictions and social distancing should be lifted within three months, compared to 64 per cent of white voters.

Congress has approved almost $3tn in economic relief since the start of the coronavirus pandemic, including the $2.2tn Cares Act, which was signed into law in March and included one-off $1,200 “economic impact payments” for Americans earning up to $75,000 a year.

Of the likely voters surveyed, almost all black voters — 98 per cent — said an additional “economic impact payment” was important to them and their families, compared to 72 per cent of white voters. Almost two-thirds of black voters said they would use the federal money for basic living expenses, such as food, mortgage or rent payments.

The findings, which are part of the monthly FT-Peterson US Economic Monitor, underscore the challenges facing Mr Trump ahead of November’s presidential election, when he will face former US vice-president Joe Biden, the presumptive Democratic party nominee who clinched his party’s nomination with the overwhelming support of African-American voters.

Mr Trump had centred his re-election efforts around his stewardship of the economy, which has had its worst collapse since the Great Depression because of nationwide lockdowns.

With just under five months to go until election day, the economic fallout of the coronavirus crisis, as well as the political backlash over Mr Trump’s handling of the Floyd protests, appear to have helped Mr Biden to widen his lead over the incumbent in nationwide surveys.

The FT-Peterson poll seeks to follow whether likely voters feel better or worse off since Donald Trump became president in 2017. Ronald Reagan defeated Jimmy Carter in 1980 after asking voters: “Are you better off than you were four years ago?”

The FT-Peterson Poll was conducted online by Global Strategy Group, a Democratic polling company, and North Star Opinion Research, a Republican group. It reflects the opinions of 1,000 likely voters nationwide, and has a margin of error of plus or minus 3 percentage points.

The Peterson Foundation is a non-partisan, non-profit organisation focused on America’s fiscal challenges.