Coronavirus has put the brakes on a long rally in palladium prices that has been a gift to miners in South Africa and Russia and to criminals in London.

The price of the silvery-white metal, used in cars’ catalytic converters to limit harmful emissions, soared 270 per cent over five years to a record high above $2,800 a troy ounce in February. The sharp rise prompted a wave of car crime in the UK’s capital.

The number of catalytic converter thefts in London jumped to 8,248 last year, from 1,674 a year earlier, according to the Metropolitan Police.

But since coronavirus struck, shutting car plants around the world, prices have dropped by a third. The industry slump, coupled with a loosening in Chinese emissions regulations intended to help local carmakers through the Covid-19 crisis, has sapped demand for the metal, which is mined as a byproduct of platinum and nickel.

The year began with expectations that demand for palladium would outstrip supply by more than 1m ounces, said Colin Hamilton, analyst at BMO Capital Markets. Today, leading producers and consultants are forecasting a market with a much closer match between supply and demand.

A balanced market is not replenishing low inventory levels, and as such any evidence of a pick-up in demand could well see palladium surge higher once more

Umicore, a Belgium-based maker of auto catalysts, said it expects global car production to fall by a quarter this year. Johnson Matthey, a UK-based rival, said demand for precious metals in catalysts will fall “sharply” as a result.

“It is likely that financial stress due to the Covid-19 crisis will motivate car companies to take a fresh look at opportunities to reduce the cost of their exhaust . . . systems, especially in China,” the UK company said.

Today, about 80 per cent of global demand for palladium comes from the car industry. The average petrol-burning vehicle contains roughly $300 of the metal, while a hybrid contains $360 worth.

Catalytic converters are mounted on the underside of a car between the engine and exhaust pipe, and work by converting toxic emissions such as carbon monoxide and nitrogen oxide to carbon dioxide, water and nitrogen. Palladium and rhodium, its sister metal, are pasted on to a honeycombed structure that filters the exhaust.

Over the past few years, carmakers in Europe and China have increased the amount of metal they use in their catalytic converters in order to meet stricter emissions limits. Between 2017 and 2019 the average quantity of precious metals used on catalytic converters rose by more than a quarter, according to Johnson Matthey. 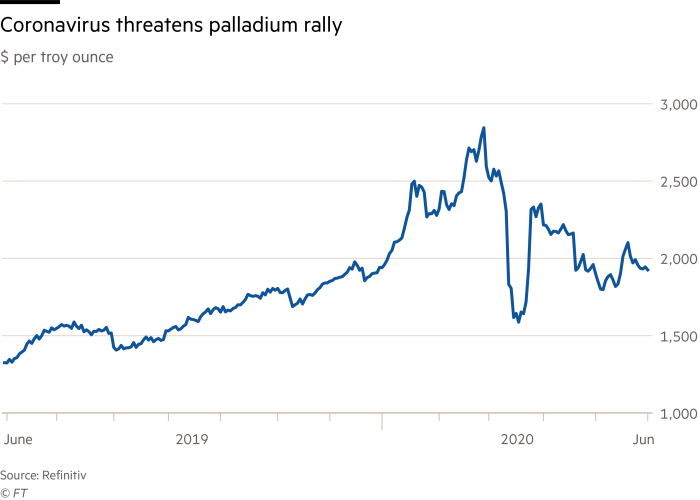 Last year, China’s demand for palladium rose by one-fifth as carmakers moved to meet stringent new emissions legislation across 16 provinces. But since the pandemic took hold, Beijing has relaxed the enforcement of the limits in the remainder of provinces that were due to meet the requirements this year. The government has also extended its subsidies for electric cars, which have no need for the devices, to 2022.

Wilma Swarts, an analyst at Metals Focus, expects global demand for palladium in car catalysts is likely to fall to 7.8m ounces this year from 8.8m ounces last year.

Carmakers can also replace palladium with platinum, but this is not easy to do without compromising the performance of the catalytic converter. In March, German chemical giant BASF said it had developed a new catalytic converter technology that enabled “partial substitution” of palladium with platinum, but still enabled carmakers to meet more stringent standards on emissions.

Still, substitution is likely to take time, according to analysts, and carmakers will be reluctant to spend money on a switch while they focus on going electric. That could give a boost to palladium prices if auto sales pick up as lockdowns are eased.

Dmitry Glushakov, an analyst at VTB Capital, said the move to palladium and rhodium-rich catalysts, which are the most effective in capturing nitrogen oxide, carbon and particulates, “will only gain pace”.

So far this year, the demand shock of falling car sales has outstripped the supply disruptions in South Africa and weak production in Russia. That has led to expectations of a broadly balanced market for the first time since 2011.

But that could change if consumption were to rise, said analysts at Citi. A “substantial” deficit could emerge, helping to drive prices up to $3,000 an ounce in 2021, from the current level of $1,930.

That is because the palladium market remains short of stock after nearly a decade of undersupply. According to Bank of America, there is less palladium being mined today than in 2004. Persistently low prices for platinum and nickel have meant that new projects have been few and far between in recent years.

“A balanced market is not replenishing low inventory levels, and as such any evidence of a pick-up in demand could well see palladium surge higher once more,” said Mr Hamilton.