When reality star and entrepreneur Kim Kardashian West walked Instagram fans through her California home earlier this year, many were agog to see an entire refrigerator devoted to just one product — packaged water.

Ms Kardashian West’s thirst is far from unique. An emphasis on health has fuelled a global bottled water boom, helping it win converts from soft drinks. Large consumer goods makers like Nestlé and Danone benefited as sales more than doubled in a decade to reach $234bn last year, according to Euromonitor.

But despite Ms Kardashian’s trendsetting power, the end of that boom may be in sight. The pandemic has left homebound consumers buying fewer bottles of water, leading the industry’s third-largest player Danone to predict that its second-quarter water sales would fall 30 per cent. The category faces a long road back to growth, especially as competition intensifies and the environmental backlash over plastic gathers pace.

“I thought I wouldn’t be able to get used to the taste of tap water compared with bottled, but I did, within a month,” said Parisa Wright, 40, a London-based lawyer who gave up bottled water last year after seeing media reports on plastic pollution.

Her friends are also resorting to the cheaper alternative that comes from the tap. The pandemic “has given people time at home to consider what they have around them . . . and look at what changes they can make”. 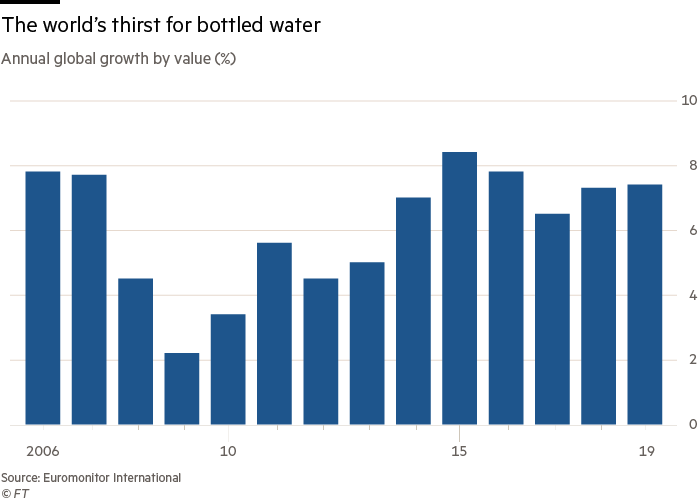 Investors as well as consumers are growing more concerned about plastic pollution and the depletion of local water tables. Martin Deboo, analyst at Jefferies, said: “People are saying bottled water is the new tobacco. That’s the tenor of the debate.”

Growth had already started to falter before Covid-19, especially for big manufacturers, in a sector that often has narrow margins despite the low cost of its raw material.

Packaging and transportation costs are high, and price competition means multipacks in the US cost as little as 20 cents a bottle. Swiss group Nestlé makes a 10.5 per cent underlying operating margin on water, the lowest of any sector it operates in, according to Jefferies, while France’s Danone makes 13 per cent.

Market leader Nestlé is considering a substantial cut to its bottled water exposure after last month announcing a potential sale of its North American water business, which had revenue of SFr3.4bn last year.

Danone, Nestlé and Coca-Cola aim to use recycled plastic for 50% of their bottled water by 2025 . . .  © HOTLI SIMANJUNTAK/EPA-EFE/Shutterstock

. . . but campaigners say ‘they need to fundamentally shift the way they do business by moving to reusable solutions’ © Getty Images

Nestlé’s US brands, such as Poland Spring, Deer Park and Arrowhead, have lost market share not only to supermarket own-labels but also to more expensive flavoured waters like LaCroix and PepsiCo’s Bubly.

Premium spring — rather than filtered — waters such as Nestlé’s S. Pellegrino, which is not part of the review, are faring better, as are so-called functional waters with added ingredients from caffeine to pomegranate seed oil or probiotics.

Danone chief executive Emmanuel Faber was challenged at a June conference about weakening growth in bottled water and sustainability concerns. But he defended the business. “Pollution and population will increase and the need for clean and pure water will only increase . . . If you want absolutely pure water you have to find a way to bring it to people in an ecologically responsible way.”

Manufacturers also defend bottled water as a healthier option at a time of rising obesity. “We were betting on this market very early, going back to the late 1980s and early 1990s, at a time when in the business everyone was still very focused on the cola wars, Coke versus Pepsi,” Nestlé chief executive Mark Schneider told the Financial Times. “We saw this as a healthy form of hydration, as opposed to carbonated soft drinks.”

Campaigners paint a very different portrait of the industry, which they argue takes — and in some cases depletes — a resource that should be tapped for public benefit. Democratic Congresswoman Rashida Tlaib told the US House of Representatives this month: “Our residents in Michigan . . . should not be forced to live off bottled water sold by corporations like Nestlé who make billions while paying almost nothing to bottle our water and harm our ecosystems.”

The House Oversight Committee, to which Ms Tlaib belongs, in March began investigating the industry, saying it was “concerned that Nestlé is taking a critical public resource from communities in need”. It pointed to the state of Michigan, where activists say the company should not be allowed to pump water for sale while areas like the city of Flint, which has suffered a lead contamination crisis, lack access to clean tap water.

In April the company won a legal battle to pump more water near Evart in Osceola County, Michigan, which had been challenged on environmental grounds. Nestlé says it has consistently donated water in Michigan and “provides healthy water in various forms through safe and responsible practices that promote sustainability”.

A sustainability expert who works with big consumer goods groups said: “The idea of some people being able to afford water and others can’t, socially, is incredibly delicate. We are facing growing water shortages, and on top of that, bottled water uses a totemic and demonised packaging format. It is a perfect storm.”

The idea of some people being able to afford water and others can’t, socially, is incredibly delicate

Danone reported weaker growth in its water division last year, while Coca-Cola said in October that “our performance in the water category has not been as strong as we’d like”. This prompted investors to question if environmental concerns were sapping demand. But Mr Schneider said such worries had not affected the market significantly, apart from in settings like college campuses. “It’s starting to show in some very advanced markets but we’re not seeing overall that it is depressing the waters market,” he said.

Some investors such as BMO Global, which manages $688bn of funds, are pushing for faster action on plastics. But others may be loath to see companies take on extra costs or exit a business that until recently had been a growth engine.

The industry is trying to assuage sustainability concerns. Danone, Nestlé and Coca-Cola aim to use recycled plastic for 50 per cent of their bottled water by 2025.

Yet campaigners say such efforts miss the point. Louise Edge, head UK plastics campaigner at environmental charity Greenpeace, said: “It’s never going to be easy to capture and process the whopping 500bn plastic bottles churned out by the soft drinks industry every year . . . Consumer goods giants and retailers need to fundamentally shift the way they do business by moving to reusable solutions.”

Democratic Congresswoman Rashida Tlaib this month hit out at companies that ‘make billions while paying almost nothing to bottle our water’ and highlighted the plight of Flint . . .  © REUTERS

. . . a city in Michigan where the water was contaminated and locals participated in a national march to highlight the push for clean water there in February 2016 © Getty Images

LaCroix, the US brand which gained a cult following earlier this decade, is sold in cans, which are more widely recycled than plastic. Coca-Cola’s Dasani and PepsiCo’s Aquafina are both now available in cans.

Ms Kardashian West’s fridge contained glass bottles from Norwegian group Voss and cartons from start-ups Boxed and Flow — although the environmental impact of such alternatives is not necessarily lower. For example, the composite materials used in cartons mean they are not widely recycled.

But manufacturers are also exploring formats without disposable packaging, such as home carbonation devices and dispensers. PepsiCo bought SodaStream for $3.2bn two years ago and said net revenue at the group rose more than 20 per cent last year. Nestlé is piloting a dispenser, Refill Plus.

Mitte, a Berlin-based start-up, is also betting consumers will sour on disposable bottles. Backed by Danone Manifesto Ventures, the corporate venture arm of the French group, Mitte will start shipping its slick home water treatment systems — which filter, mineralise and carbonate — next year for between €200 and €250; a waiting list is already more than 10,000-strong.

“Our buyers are health conscious and aware about sustainability, the impact of bottled water. They are looking for better alternatives,” said founder Karan Sarin.

With the pandemic still raging, so-called out of home purchases — including of water — are expected to recover slowly. Mr Deboo said such exposure was proving “bigger than managements had thought” since even bottles bought in supermarkets are often for immediate consumption.

Nestlé’s potential sale of its North American unit could prove a key test of the sector’s valuation and prospects after the pandemic. But Mr Deboo said rivals such as Danone, Coca-Cola and PepsiCo would be unlikely buyers, leaving the options of private equity or a joint venture. “The real benefit is getting a strategic distraction and an environmental burden off the books,” he said.

Mr Schneider says Nestlé has big plans for the premium brands it will retain: “We stand behind the long-term prospects of the water business . . . Water is a wonderful business opportunity.”