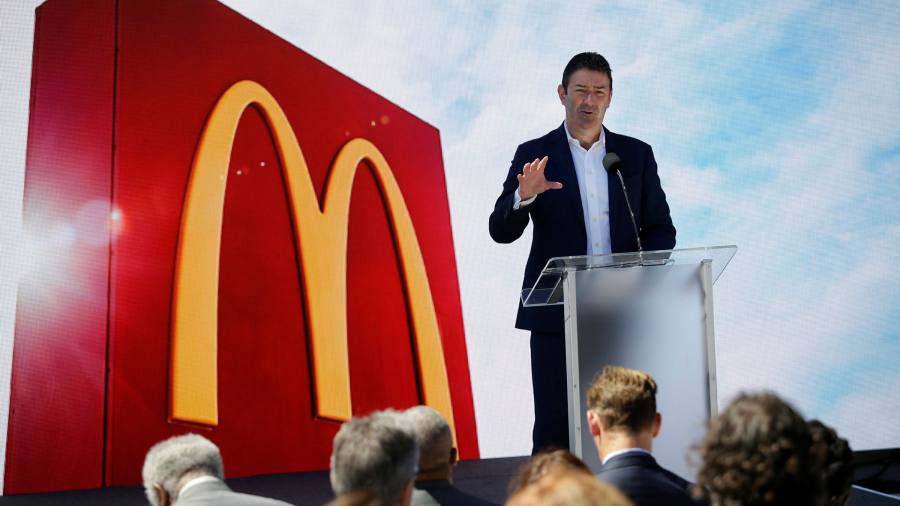 McDonald’s is facing shareholder opposition over its handling of Steve Easterbrook’s dismissal, with an influential advisory group criticising an exit package for the former chief executive estimated to be worth tens of millions of dollars.

Ahead of McDonald’s annual meeting this month, Glass Lewis said it had “substantial concerns” about the departure terms for Mr Easterbrook, who lost his job last November as head of the world’s biggest burger group after he had a romantic relationship with a colleague. The consensual relationship violated the US company’s policies.

The Englishman, who led the Chicago-based chain for more than four years, was let go on a “without cause” basis, making him eligible for a series of lucrative benefits to which he would have otherwise not been entitled.

On top of a separation payment worth $700,000 and prorated incentive plan shares worth $3m, Mr Easterbrook’s leaving package included a right to exercise options that were due to vest in the next three years and a share of restricted stock units the board had granted him.

The deal could be worth more than $40m, according to figures from remuneration data company Equilar.

As part of the arrangement, Mr Easterbrook agreed not to work for rivals such as Burger King and Subway for the next two years, disparage McDonald’s on social media, or give interviews about his tenure without the agreement of the company’s general counsel.

Glass Lewis has recommended investors vote against the company’s executive pay, and also against the re-election of director Richard Lenny, the Conagra Brands chairman who chairs McDonald’s remuneration committee.

Glass Lewis said the terms differed “drastically” from the treatment he would have received had he been fired on a “for cause” basis and illustrated “a lack of willingness on the board’s part to appropriately enforce the company policy violated by Mr Easterbrook”.

“Exempting CEOs from key provisions of crucial rules around corporate policy sets a questionable tone at the top,” it added.

McDonald’s is due to hold its annual meeting virtually on May 21.

Asked about the opposition to Mr Easterbrook’s departure terms, McDonald’s pointed to a filing it made with the US Securities and Exchange Commission last November about his exit.

Mr Easterbrook said at the time that he had made a mistake in having the relationship.

He was replaced at the helm by Chris Kempczinski, who is trying to steer the group through the huge challenges posed by the coronavirus crisis.

McDonald’s outlets remain open in the US for drive-through service but have been forced to close entirely in several countries.

The company disclosed last week that like-for-like sales at its “international operated” division, which includes the UK, France and Italy, were expected to drop about 70 per cent in April and 20 per cent in the US.