Intense economic pressure to lift coronavirus lockdowns around the world has stoked debate over the minimum physical distancing needed to limit the spread of infection.

Evidence so far suggests that the World Health Organization guideline of one metre is a bare minimum, and that the transmission risk falls further as that gap widens to two metres and beyond.

But the judgment is complicated because distancing is just one of many factors that influence infection rates — and because persisting with two metre spacing would hamper the revival of social and business activities.

That is why countries such as Spain and the UK with 2-metre rules have either decided to reduce the distance or are considering doing so. Government scientists and other experts have tried to persuade people that reducing the distance limit is a fair response to the pros and cons, rather than a reckless step showing livelihoods are valued more than lives.

Sir Patrick Vallance, the UK government’s chief scientific adviser, said this week that reducing the country’s existing two-metre benchmark would be based on an “assessment on when risk reduces”.

“[It is] wrong to portray this as a scientific rule that says it is two metres or nothing,” he said.

Fernando Simón, the epidemiologist leading Spain’s virus fight, said this week that two metres was still ideal, even though his country would cut its requirement to 1.5 metres from June 21.

It would be far preferable if you maintained two metres . . . [but] because of economic considerations we might have to be more flexible

“Now studies indicate that on metre is enough, plus a margin of security,” he said. “In any case, [these] security and protection measures are never on their own.”

Linda Bauld, professor of public health at Edinburgh University, said: “From a public health perspective, it would be far preferable if you maintained two metres . . . [but] because of economic considerations we might have to be more flexible.”

She added: “It is not all about distancing — it is about other things, too”.

Part of the reason for the varying views is that research done on distancing to date has tended to be so-called observational studies or mechanistic experiments using modelling. Neither meets the gold standard of the controlled clinical trial, which is any case difficult to do in this field because it is hard to account for other variables.

There is also still no consensus on the crucial point of whether the virus is spread only by respiratory droplets that quickly fall to the ground or also by smaller, longer-lingering particles known as aerosols.

A 2017 study using mannequins suggested that the number of large respiratory droplets that would hit another person’s face or be inhaled by them would fall to zero if the distance between them was 1.5 metres rather than one metre. 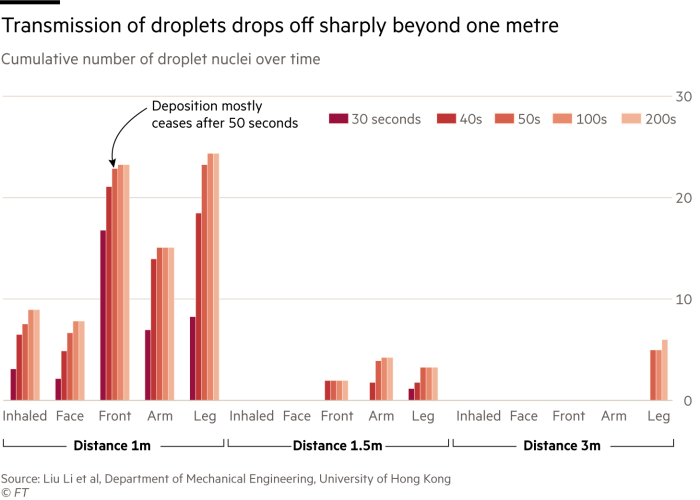 Those results appeared consistent with a paper published in The Lancet this month, which suggested that the 12.8 per cent chance of infection at less than 1 metre spacing fell to 2.6 per cent beyond that range. It also indicated that risk continued to fall off with greater distance.

But the study has been questioned for taking insufficient account of the possible impact of exposure time. “Duration and distance both matter,” tweeted Ben Cowling, professor in the University of Hong Kong’s school of public health. “This review remarkably fails to take duration into account.”

His comments highlight a wider point about the dangers of fixating on distance, while ignoring other mitigating factors such as wearing masks, improving ventilation or limiting time spent in potentially infected environments.

For example, being at close quarters to somebody for a short time may not cause problems outdoors, where the virus will tend to disperse quickly in the air. Conversely, even maintaining 2 metres distancing over an extended stay indoors may not be enough to prevent infection.

A paper on South Korean coronavirus cases this year found that people in 50-minute fitness dance classes with as few as five people became infected, even though the 60 square metres room was theoretically large enough to allow two metre distancing.

“We have seen that the two metre rule doesn’t really work in crowded indoor environments,” said Muge Cevik, a clinician and researcher in virology at the University of St Andrews. “Even if you have a distance from the infected person, you can still become infected yourself.”

As with other aspects of official responses to the pandemic, the answer to the distancing conundrum depends on incomplete data, roughly gauged risks and the pragmatic reality of how people live and work.

The competing pressure are reflected in the tensions between two of the firmer conclusions to be drawn: more distance is generally better then less, but two metres is no panacea and may cause social damage in others ways.

“Risk is not binary,” said Julia Marcus, an epidemiologist and assistant professor at Harvard Medical School. “It’s not like if you’re more than two metres from somebody you’re safe, and if you’re within two metres you’re unsafe. It doesn’t work that way.

“It’s another example of how we get fixated on these binaries and forget that risk is actually a spectrum.”