A Communist party official who gained notoriety for his violent suppression of protests on the mainland has been appointed chief of Hong Kong’s new national security office.

Zheng Yanxiong, 56, has been given substantial power over residents as well as foreign businesses under the territory’s new anti-subversion laws.

He had previously overseen the police suppression of demonstrations in the southern Chinese village of Wukan in 2011, where locals were protesting a land sale by the government. He was later promoted to Communist party secretary of Guangdong province, which borders Hong Kong.

In his new role, Mr Zheng will oversee Hong Kong’s Office for Safeguarding National Security, whose responsibilities include stamping out subversion, secession, terrorism and “collusion” with “external elements”.

Residents expect the office to work with the territory’s police force to quash pro-democracy protests that have brought millions on to the streets over the past year.

On Friday, Hong Kong authorities launched the first prosecution under the new laws when a 24-year-old man appeared in court for inciting secession and terrorism.

According to the police, the suspect drove a motorcycle into officers on Wednesday, injuring three members of the force. He was also displaying a flag with the banned slogan: “Liberate Hong Kong, Revolution of Our Times.”

On the first day after the national security law came into effect, police arrested as many as 370 people at a protest, and at least 10 others for national-security-related crimes such as carrying a Hong Kong independence flag. 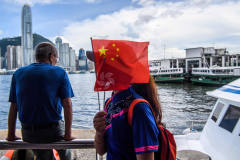 Under the new security law’s extraterritorial clauses, Mr Zheng has also been tasked with “strengthening management over organs” of foreign countries, international non-governmental bodies, as well as news agencies, in partnership with China’s ministry of foreign affairs.

It was “slightly surprising” that Beijing appointed Mr Zheng, who had a background in “managing public sentiment”, as opposed to someone who had worked in the police, said an official in Guangdong’s provincial government who deals with Hong Kong affairs. Mr Zheng has spent time working in state media and in the propaganda bureau.

“This indicates that the Communist party’s hopes for Hong Kong are not only about sending people to conduct suppression, but also about hoping to soften the attitudes of Hong Kong locals,” the official, who did not want to be named, told the Financial Times.

Before Beijing blamed outside forces for the demonstrations in Hong Kong, Mr Zheng said foreign media were behind the Wukan protests nine years ago.

“Pigs will climb trees before the [foreign] media become trustworthy,” Mr Zheng said in a meeting with Wukan villagers, according to a video shared online.