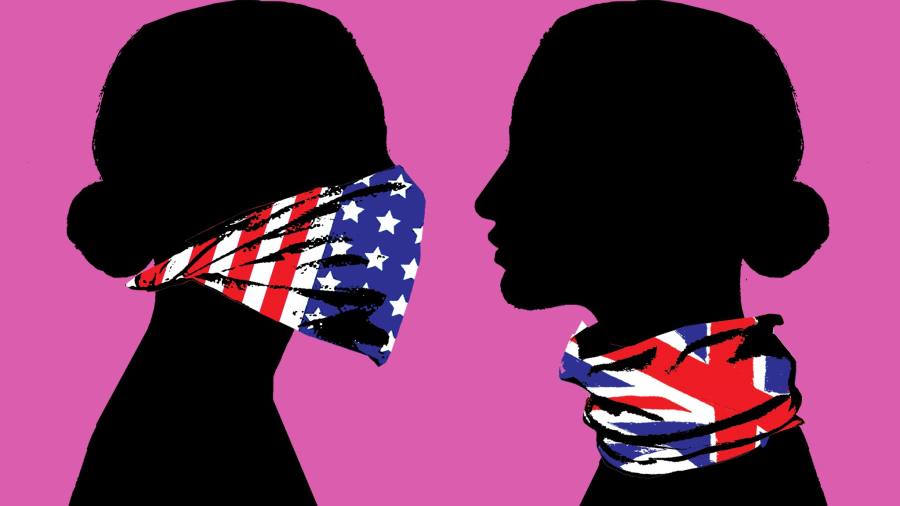 Last weekend I made a journey that I used to consider utterly commonplace in happier, pre-Covid times — but which now seems momentous. With one teenage daughter in tow, I boarded a plane in New York (where I live) and flew to London, to see my other daughter.

To my relief, travel was far easier than I expected: the airports were empty, the plane half-full and the airline staff kindly provided a gigantic gin and tonic, which I guzzled with a straw while wearing the mandatory face mask.

What I did not expect was to be hit with a subtle but striking form of culture shock on arrival in London. In New York, face masks are now an embedded — and embodied — part of life.

Street signs declare “OUTSIDE WITH NO MASK? FUGGEDABOUTIT!” Buildings carry more polite notices warning that anyone without a mask is banned. And even without such strictures, almost everyone I see on the streets in my corner of Manhattan has their face covered. Strangers sometimes yell at people who do not.

Indeed, there is such a strong sense of social pressure that in recent months I have worn a mask even when cycling, virtually alone, along Manhattan’s East river. And my daughter has taken to shopping online for “fashion masks” (not least because her school has told her that mask-wearing will be mandatory when they return to class, and she wants to look cool).

Not so in London. A new report issued by the Royal Society and the British Academy shows that, at the end of April, just 25 per cent of Brits wore face masks in public places compared with 66 per cent of Americans. We saw this for ourselves: in London, we appeared to be almost the only people wearing masks on the streets or in shops; even on public transport (where they are supposedly mandatory) some seem to eschew them.

What was equally striking was the contrast in body language. In New York, it has become almost instinctive for people to stand six feet apart. In London, the “instinctive” gap seemed far less.

As a result, when my daughter and I naturally recoiled from people on the street with our New York habits (and masks), we got dirty looks. Maybe Londoners interpreted our behaviour as a sign that we considered ourselves to be infectious. (We know we are not, since we had Covid-19 tests in New York, before departure, and in London, on arrival — and discovered in the process that testing is child’s play to arrange in Manhattan but nightmarishly difficult and costly in London.)

Don’t get me wrong: I am not necessarily arguing that New York has been stricter than London in its overall Covid-19 policy, let alone making any judgments about the US as a whole. Other parts of the US have been extremely lax (which is one reason the infection rate is surging in the south).

Indeed, after talking with London friends, it seems they may have been more rigorous than New Yorkers in other respects. My New York friends have been taking socially distanced walks with each other throughout the crisis; my London ones have not, until recently.

A study by the Institute of Labor Economics in Germany showed that, while many in the US have continued to order take-away throughout the pandemic, Brits are now less likely to do so than they were before it began. And many London friends tell me that they have been rigorous about disinfecting any cardboard packages that come into their homes (or even quarantining them); this is not the case for most New Yorkers I know. So it’s hard to judge, anecdotally, which city has been more “safe”.

But, if nothing else, these subtle differences reveal three key points. The first is the degree to which this crisis has caused us all to define normality according to what we see directly around us. It is not just our physical horizons that have shrunk; for many of us, our mental ones have narrowed too.

Second, it has shown how malleable our ideas of “normality” can be. Three months ago, I presumed that mask-wearing would only be considered “normal” in collectivist cultures such as Japan or Singapore. Now abrasive, individualistic New Yorkers have embraced it too, to a striking degree.

And from these two points there is a third crucial lesson: if government officials want to keep fighting the pandemic, they must pay close attention to these subtle, embodied behavioural patterns and devise public health policies that chime with them.

In the case of New York, for example, I suspect that the real benefit of a face mask policy is that masks not only prevent the exhalation of the virus — but also act as a constant reminder that we cannot let our guard down. They are a symbol and reminder of civic responsibility.

Others may disagree. Either way, the key point is one illustrated powerfully by the anthropologist Simon Roberts in a timely new book, The Power of Not Thinking: “embodied” habits matter deeply, even if we rarely notice our familiar ones — unless we travel. After a few days in London, I have started to “forget” my mask when I venture outside. When I return to New York, I will have to relearn my habits all over again.