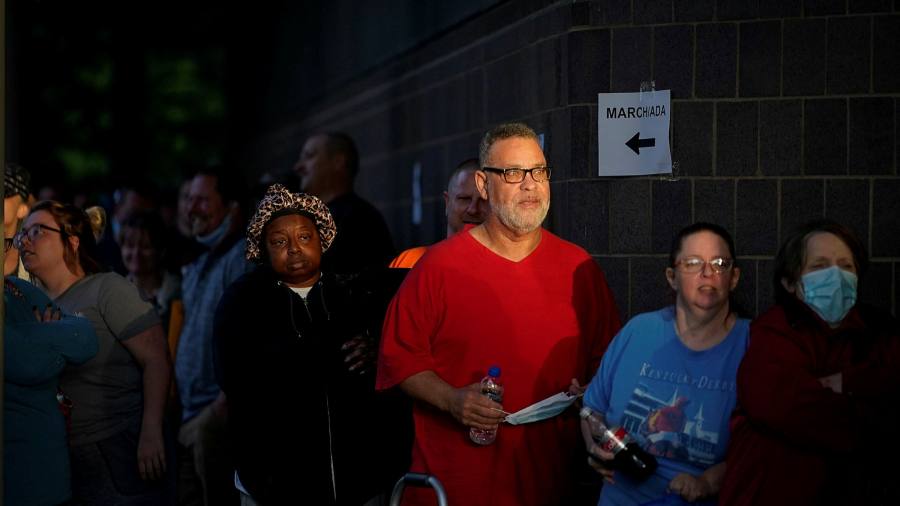 The number of Americans applying for first-time unemployment benefits edged lower again to 1.51m last week, as employers continued to call back workers amid the phasing out of coronavirus-related shutdowns.

Seasonally adjusted new jobless claims for the week ending June 13 were down from a revised 1.57m the week before, the US labour department said on Thursday. The report was slightly worse than economists’ forecast of 1.3m new applications and marked a slower decline than in previous weeks.

More than 45m Americans have sought unemployment cheques since the beginning of the pandemic, sending the jobless rate above levels seen during the depths of the 2008 financial crisis.

The labour market has recently been on the mend, aided by the reopening of the US economy and $3tn in fiscal stimulus from Washington, including loans to small businesses. New jobless claims have fallen in each of the last 11 weeks, and May brought an unexpected surge in hiring, with some of the worst-hit sectors, including hospitality and retail, contributing to the job gains.

Continuing claims, which tally the number of people actively receiving benefits, eased to 20.5m in the first week of June from 20.6m, accounting for 14.1 per cent of the workforce. The so-called insured unemployment rate, which remained unchanged versus a week earlier, is considered an alternative measure of joblessness.

Pandemic Unemployment Assistance, a federal programme that extends aid to the self-employed or other individuals who would not qualify for regular unemployment compensation, drew an unadjusted 760,526 first-time claims. The pace of PUA claims has fallen from 1.3m over the span of three weeks.

State programmes counted nearly 6.9m weekly claims at their peak in March, although that has fallen to fewer than 2m claims for the last three weeks.

Other data this week provided signs that the US economy has begun to regain its footing after the lockdowns.

Retail sales jumped 17.7 per cent in May, the biggest monthly gain on record, as the loosening of coronavirus restrictions and increased employment supported consumer spending. The scale of the rebound should lead to upward revisions to otherwise dismal second-quarter GDP estimates, with the report “clearly boosting hopes of a more V-shaped recovery”, according to ING chief international economist James Knightley.

Permits to build new homes — a gauge of future construction — were up 14.4 per cent last month. The housing market has benefited from mortgage rates that are near record lows.