The New Delhi state government has been accused of under-reporting coronavirus deaths as India eases its strict lockdown in an attempt to kick-start the economy.

The five hospitals, which responded to Financial Times requests for information on condition of anonymity, suffered at least 577 confirmed coronavirus fatalities as of June 1. The death toll rose to 654 when suspected cases — those patients who showed symptoms but died without testing — were also included.

The figures from these five hospitals alone exceeded the state government’s official tally of 523 deaths across the entire New Delhi national capital territory up until June 1.

“There is systemic undercounting of deaths,” said Ramanan Laxminarayan, director of the Center for Disease Dynamics, Economics and Policy, a think-tank. “This may be seem like a good idea to manage public perceptions in the short run, but it is going to cost in the long term.”

The discrepancy in the New Delhi data will amplify fears that authorities are obscuring the true scale of India’s coronavirus crisis, limiting the ability of healthcare providers to mount an adequate response.

Two of the 15 hospitals contacted by the FT declined to release their death figures because it was against government protocol. A further eight said they could not give specific data for the period up until June 1, or could not be reached for comment.

They are recording just one-fourth of the deaths. It is very clear, no one wants to know the numbers

Experts said undercounting happened in part because not all patients with more than one condition were counted as coronavirus deaths. The government has also banned the collection of coronavirus samples from untested dead bodies.

Doctors said the scale of the problem was terrifying.

“It is a scary feeling, the disease is rapidly going out of control,” said Kush Sharma, a doctor working at Lok Nayak Hospital, a designated coronavirus facility in New Delhi. “In [intensive care units], we are used to mortalities. It is always painful but it is never been like this, where you lose three, four patients every day.”

During a normal week, they would lose two or three patients, Dr Sharma said. “It is absolutely traumatising.”

The problems with undercounting in Delhi, which is governed by the Aam Aadmi party, were common across India, analysts said, although there were some states that had won plaudits for their control of the virus, such as Kerala, where just 18 deaths have been recorded.

“[Officials] are recording just one-fourth of the deaths,” said an executive at a private hospital in New Delhi, who asked to remain anonymous for fear of retribution from the government. “It is very clear, no one wants to know the numbers.”

Aam Aadmi denied there was deliberate under-reporting in New Delhi and said the reason for the discrepancy was because some hospitals were not reporting their fatality figures properly.

“Now the problem of under-reporting has been more or less been fixed,” the party said. “Eventually the figures have added up. It takes time because of the bureaucratic process involved.” 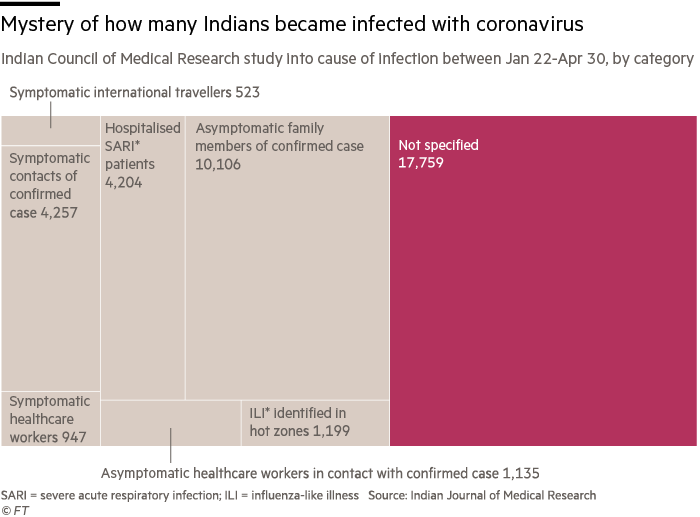 India has the world’s fifth highest number of coronavirus cases — more than 276,000 infections and more than 8,000 deaths — despite a harsh lockdown that lasted months.

In New Delhi, graveyards and crematoriums are struggling to handle the number of bodies.

At Nigambodh Ghat, the capital’s biggest crematorium, supervisor Avdesh Sharma said they had received 15 to 30 bodies every day for the past two weeks who had died from Covid-19, in addition to their normal intake of 50. “We are unable to cope with such a large number,” he said.

Haji Faiyajuddin, the head of the Ahle Islam cemetery, said he was burying four Covid-19 positive bodies a day, double the normal average.

“If these numbers continue, we will run out of burial space in this public graveyard in just a month, perhaps even sooner if there is a major spike,” said Mr Faiyajuddin.

Widespread poverty and densely populated slums are fuelling the growth of the virus with the country’s infection curve showing no signs of slowing, according to experts.

Mr Laxminarayan of the Center for Disease Dynamics, Economics and Policy estimated that more than 200m Indians could be infected by September. “We are on a steep upswing,” he said.

Ravi Dosi, a pulmonologist at the Sri Aurobindo Institute of Medical Sciences, a private medical college in Indore, a city of 2m in central India, said hospitals had been overwhelmed for weeks.

“For the last one-and-a-half months our critical care beds have been fully occupied,” said Dr Dosi. “Given the rapid rise in the number of cases, I fear we will soon have to turn down patients needing intensive care.”