Last August Mukesh Ambani made an onstage pledge in front of thousands of applauding shareholders. He would bring in global investors to eradicate Reliance Industries’ net debt, which had ballooned above $20bn as the conglomerate expanded its young telecom and digital venture Jio, within 18 months.

Reliance, which also completed a $7bn rights issue last month, says its net debt — total debt minus cash — is now zero in what observers say marks the culmination of one of the world’s swiftest and most unexpected deleveraging drives, all amid the throes of the pandemic. 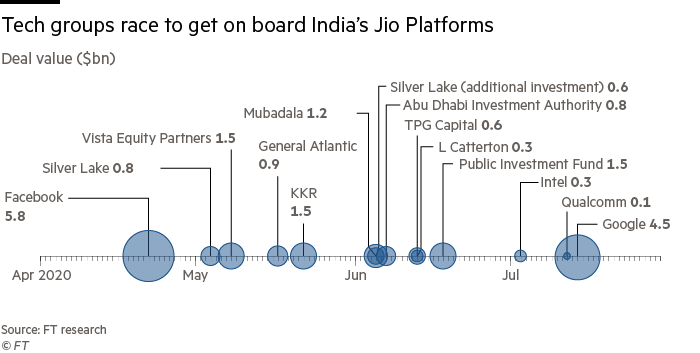 It came despite Mr Ambani conceding that a deal announced last year for Saudi Aramco to invest roughly $15bn in Reliance’s core refining unit had stalled because of turbulence in energy markets. The revelation on what had become a protracted source of uncertainty for shareholders knocked the company’s stock 4 per cent off its record perch on Wednesday, although it has since regained much of the lost ground.

Mr Ambani, however, says Reliance has now met its equity requirements. Private equity and venture capital investments in Jio in May and June alone exceeded in value all other Indian PE and VC deals so far this year, according to accounting firm EY, reversing a sharp drop in inflows when the pandemic hit in March.

“This isn’t something I’ve seen in India, and I suspect the entire fundraise would be unprecedented globally as well,” said Amit Tandon, founder of Institutional Investor Advisory Services.

For US groups such as Google and Facebook, India has often proved a tricky regulatory market. At a time when Chinese competition has been sharply curtailed, analysts say Reliance is best placed to dominate the fast-growing digital economy, combining a sprawling on-ground operation with political savvy and a favourable image as India’s would-be national champion.

Since launching in 2016, Jio has grown into India’s largest telecom operator by users with 388m subscribers. It is pushing ahead with new ventures from an ecommerce platform to digital payments and even a videoconferencing service, JioMeet.

Reliance has “got a vision to give data consumption and services to the Indian households and businesses at their doorstep at the most affordable prices”, said Sanjay Nayar, India chief executive at KKR, which invested $1.5bn in Jio in May. “What’s affordable for China and America is not affordable for India.”

Over the past decade Reliance has used its lucrative petrochemicals and refining operations to borrow billions of dollars to expand Jio, from laying a nationwide fibre network to producing cheap mobile phones, muscling out incumbents who could not match its low prices.

But the company’s mounting leverage — its net debt to equity ratio rose tenfold between 2013 and last year, according to Bernstein Research — unnerved investors and analysts. Shortly before Mr Ambani made last year’s debt pledge, Credit Suisse, for example, had lowered its rating on the stock to “underperform”.

Reliance did not respond to a request for comment.

Scrutiny of Reliance’s debt contributed to Mr Ambani’s decision to announce the Saudi Aramco deal last August despite the parties having only signed a non-binding letter of intent, according to one person familiar with the agreement.

By then it was also clear internally that Reliance’s strategy would be to court US west coast investors and sovereign wealth funds for investments in Jio, according to another person.

That plan became more urgent in the early months of 2020 when the pandemic caused a plunge in oil prices and a sharp drop in demand for Reliance’s energy products, still its main source of revenues. Reliance’s representatives contacted some would-be investors around this time, one person said.

Mr Ambani was clear Jio needed to secure a big investor first, and reached a $5.7bn deal with Facebook in April. Others followed at a rate of about one a week, with negotiations conducted over Zoom and some deals put together in as little as 10 days, the people said.

Mr Ambani has proudly told insiders the plan was executed “like clockwork” despite the global crisis, according to one of the people briefed. “No one expected it to happen so soon,” the person said. “He didn’t need to clock all those air miles.”

While Reliance says it is net debt-free, the bulk of the funds raised through the rights issue will only be received next year. Several analysts, including those at Nomura, also have higher estimates of Reliance’s leverage, putting net debt before the fundraising above $30bn on account of obligations such as spectrum liabilities that it calculates separately.

The fate of the Saudi Aramco deal, Reliance’s biggest of all, remains unclear. While neither side has said it is off, one of the people said the nature of the partnership was now uncertain, with the pandemic hit to the Saudi state energy giant’s finances exacerbating reservations about the deal. Bernstein says Reliance will probably have to accept a lower valuation if it is to go ahead.

Having cut the debt, observers say Reliance now needs to deliver on Jio’s nascent digital forays to boost its valuation ahead of a planned public listing. These include its hyperlocal ecommerce service, which it has paired with Facebook’s WhatsApp messaging service, and a new 5G project.

But such is Reliance’s heft that private equity investors reason a stake in Jio will prove a reliable bet, said Jayanth Kolla, founder of Bangalore-based consultancy Convergence Catalyst.

With coronavirus, “fund managers’ strategies are out of the window”, he said. “For their scale and ticket sizes, [investing in Jio] is as stable as it gets in the current environment.”