An overwhelming majority of American voters trust their state’s governor over Donald Trump to decide when to reopen businesses, according to a new poll for the Financial Times that signals mounting dissatisfaction with the president’s handling of the coronavirus crisis.

The monthly survey for the FT and the Peter G Peterson Foundation found that 71 per cent of likely voters trusted their state’s governor rather than Mr Trump to “make the right decision” on easing social distancing and restrictions on non-essential businesses. 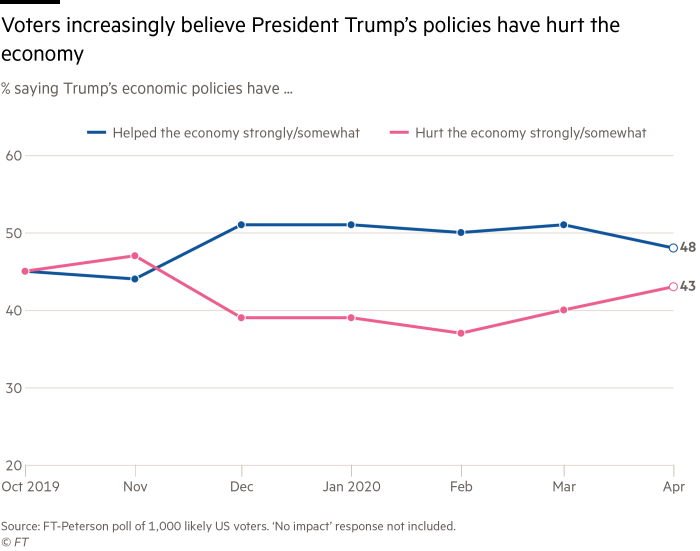 The findings of the latest FT-Peterson poll, conducted between April 23 and April 27, come amid tensions between the White House and several governors on the pace of lifting lockdown measures.

They also reinforce the mounting concern among Mr Trump’s political advisers about the threat the economic meltdown triggered by the lockdowns poses to the president’s re-election prospects.

The FT-Peterson poll showed that the partisan polarisation that has come to define the Trump presidency has persisted through the outbreak. While 90 per cent of Democrats and 78 per cent of independents trust their governor over Mr Trump, the president fared better with Republicans — though even among his own party, almost half (47 per cent) sided with their state’s leader.

The findings, which are part of the monthly FT-Peterson US Economic Monitor, underscore the challenges facing Mr Trump ahead of November’s presidential election, when he is likely to face former vice-president Joe Biden, the presumptive Democratic party nominee.

Before the coronavirus crisis, Mr Trump had staked his re-election bid on a strong economy. But the spread of Covid-19 has knocked US businesses and households, with more than 30m Americans filing claims for unemployment since the start of lockdowns. Sixty-nine per cent of people polled for the FT said their family’s income had been reduced during the coronavirus pandemic.

The US Congress has passed almost $3tn in economic stimulus measures intended to ease the burden for many Americans but demand for federal loan schemes, such as the Paycheck Protection Program for small businesses, has outstripped supply. Lawmakers from both parties have argued that one-off $1,200 “economic impact payments” for adults earning up to $75,000 a year would not go far enough to support struggling families.

The White House has nevertheless insisted the US economy will bounce back before the end of the year. Mike Pence, vice-president, told Fox News on Sunday: “I have no doubt that the second half of this year we’re going to see an American comeback,” adding that 2021 would be “one of the best years in the history of our economy”.

But the FT-Peterson poll found the majority of Americans think it will take longer than a year for the US economy to rebound, with 56 per cent of likely voters saying it will take a year or more for the economy to “fully recover”. Twenty-nine per cent of likely voters said a recovery would take between one and two years; 18 per cent said between two and five years; another 9 per cent said it would take five years or longer.

The FT-Peterson Poll was conducted online by Global Strategy Group, a Democratic polling company, and North Star Opinion Research, a Republican group. It reflects the opinions of 1,000 likely voters nationwide, and has a margin of error of plus or minus 3 percentage points.

The Peterson Foundation is a non-partisan, non-profit organisation focused on America’s fiscal challenges.