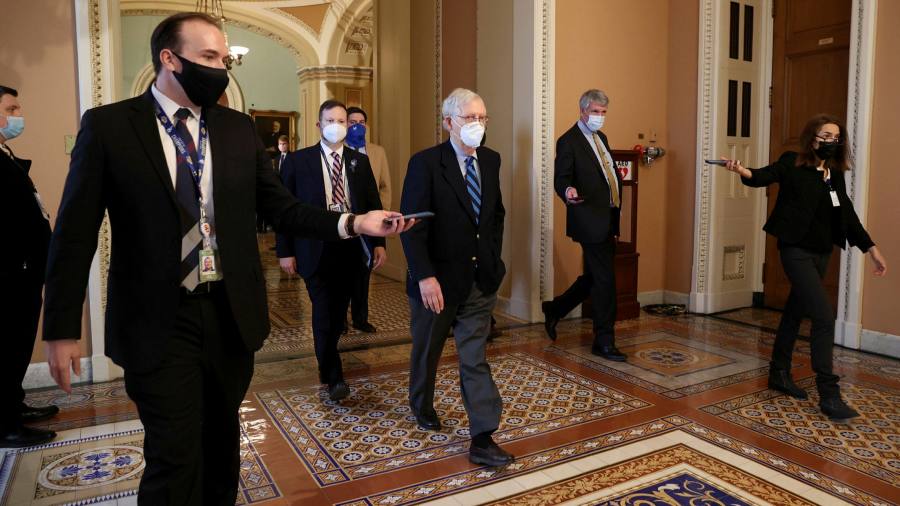 Mitch McConnell has blamed Donald Trump for last week’s siege on Capitol Hill, saying the mob was “fed lies” and “provoked by the president” ahead of the violent attack that left five people dead.

The broadside was delivered on Mr Trump’s final day in the White House and on the eve of Joe Biden’s inauguration as the 46th president of the United States.

“The mob was fed lies. They were provoked by the president and other powerful people,” Mr McConnell, the Senate’s most senior Republican, said in a speech. “And they tried to use fear and violence to stop a specific proceeding of the first branch of the federal government which they did not like.”

Mr Trump, who has refused to concede that he lost November’s presidential election, is due to leave Washington on Wednesday morning and fly to his Mar-a-Lago resort in Florida. In a break with precedent, he will not attend Mr Biden’s swearing-in or welcome the new president and first lady to the White House.

Mr McConnell, the Senate’s most senior Republican, worked in lockstep with the president for most of the past four years. But he has broken with Mr Trump over his role in the Capitol Hill siege, and has held open the possibility that he could vote to convict Mr Trump in an impeachment trial that would take place in the Senate after the president leaves office.

Mr Trump last week became the first president in US history to be impeached twice, after the Democratic-controlled House of Representatives voted to charge him with inciting an insurrection. House Democrats were joined by 10 House Republicans, including Liz Cheney, in that vote.

Mr McConnell will be demoted to Senate minority leader from Wednesday, when Kamala Harris is sworn in as vice-president and two Democrats from Georgia — Raphael Warnock and Jon Ossoff — are sworn in as US senators.

Mr Warnock and Mr Ossoff’s wins in hotly-contested Senate run-offs this month gave Democrats the smallest possible majority in the upper chamber of Congress, which will be split, 50-50, with Ms Harris able to cast the tiebreaking vote. Chuck Schumer, the Democratic senator from New York, will become majority leader.

“Tomorrow, president-elect Biden and vice-president-elect Harris will be sworn in,” Mr McConnell added. “We will have a safe and successful inaugural, right here, on the west front of the Capitol.”

Tens of thousands of armed law enforcement, including some 25,000 members of the National Guard, are protecting the Capitol, the White House and other landmarks in Washington ahead of Wednesday’s inauguration.

“Our work for the American people will continue as it has for more than 230 years. There are serious challenges that our nation needs to continue confronting,” Mr McConnell said.

Mr Biden, who will be the second Catholic president in US history, has reportedly invited Mr McConnell to attend church with him on Wednesday morning ahead of his swearing-in, alongside other congressional leaders, including Mr Schumer, Democratic speaker of the House Nancy Pelosi and Republican House minority leader Kevin McCarthy.