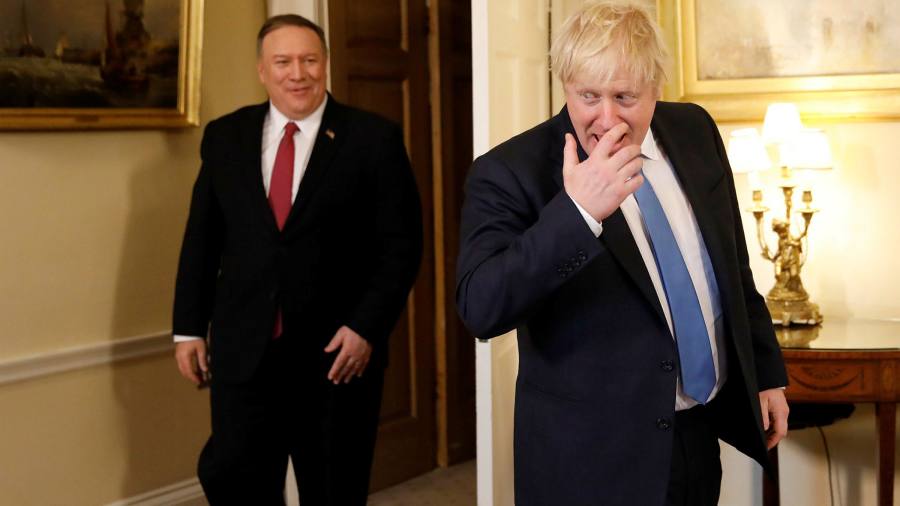 Mike Pompeo, US secretary of state, has indicated Britain should choose a side as geopolitical tensions rise between western nations and China.

Accusing Beijing of “coercive bullying tactics”, the top US diplomat said on Tuesday evening that America “stands ready to assist our friends in the UK with any needs they have”, from building nuclear power plants to developing 5G technology free of Chinese influence.

Mr Pompeo’s intervention comes as China has faced international criticism for allegedly concealing the true scale of the coronavirus outbreak, and for seeking to impose a new security law in Hong Kong.

His words were followed swiftly by a warning from Jens Stoltenberg, Nato’s secretary-general, that China was “coming closer” and that allies had to “stand together” to oppose Beijing’s growing military and economic dominance.

“China is coming closer to us, we see that in the Arctic, we see they are heavily investing in critical infrastructure in Europe, and we see of course China also operating in cyber space,” Mr Stoltenberg told the BBC on Wednesday.

While the UK had previously forged close economic ties with Beijing — and agreed in January to allow Chinese equipment maker Huawei a role in delivering 5G mobile networks — Prime Minister Boris Johnson is under increasing pressure to reset relations with the Asian superpower.

Mr Johnson is facing mounting calls from Washington and from within his own party to reverse his decision on Huawei, with critics warning that the deal will allow Beijing a backdoor to spy on UK communications.

In his statement, Mr Pompeo accused the Chinese government of using HSBC’s business in China as “political leverage” against a possible revocation of the Huawei deal, and warned that China’s “attempted coercion” of the UK showed the need to avoid over-reliance on the country.

“The United States stands with our allies and partners against the Chinese Communist Party’s coercive bullying tactics,” he said. “In the latest example, Beijing has reportedly threatened to punish British bank HSBC and to break commitments to build nuclear power plants in the United Kingdom unless London allows Huawei to build its 5G network.”

He added: “Beijing’s aggressive behavior shows why countries should avoid economic overreliance on China and should guard their critical infrastructure from CCP influence.”

The US secretary of state also criticised HSBC for its “kowtowing” to Beijing after the bank publicly expressed support for controversial national security laws which China has pledged to impose on Hong Kong. “Free nations deal in true friendship and desire mutual prosperity, not political and corporate kowtows,” he said.

The stance of the bank has put it at odds with the British government, which has condemned the law and set itself on a collision course with Beijing after offering to extend visa rights to almost 3m Hong Kong residents.

Mr Pompeo did not give any details about the alleged pressure put on HSBC and the bank declined to comment on the secretary of state’s statement.

Last month, the UK government signalled it was taking a tougher approach on Huawei after instructing officials to start drawing up plans to force a full phase-out of the company from Britain’s telecoms infrastructure within three years.

The prospect of a full ban on Huawei equipment has increased since a branch of GCHQ, the UK’s signals intelligence agency, launched an emergency review on the back of new US sanctions announced in May which could make the supply chain harder to secure.

The US had lobbied for an outright ban on the company, with Mr Pompeo warning on Tuesday that “Shenzhen-based Huawei is an extension of the Chinese Communist Party’s surveillance state”.

But Scott Petty, chief technology officer of telecoms company Vodafone UK, warned in the Financial Times on Tuesday that the UK’s hopes of leading the world in 5G technology would be dealt a terminal blow if the government removed Huawei from its infrastructure.

“The UK’s leadership in 5G will be lost if mobile operators are forced to spend time and money replacing existing equipment,” he said.

“These are rarely as simple as taking sides,” he said. “I also think it would have been better if the US had put in the effort two or three years ago to develop their own 5G solution.”

In the UK nuclear industry China’s CGN is supporting France’s EDF by part-financing the construction of the Hinkley Point C and the development of the Sizewell C projects. It is also aiming to lead on another proposed atomic plant, at Bradwell in Essex, using its own reactor technology.