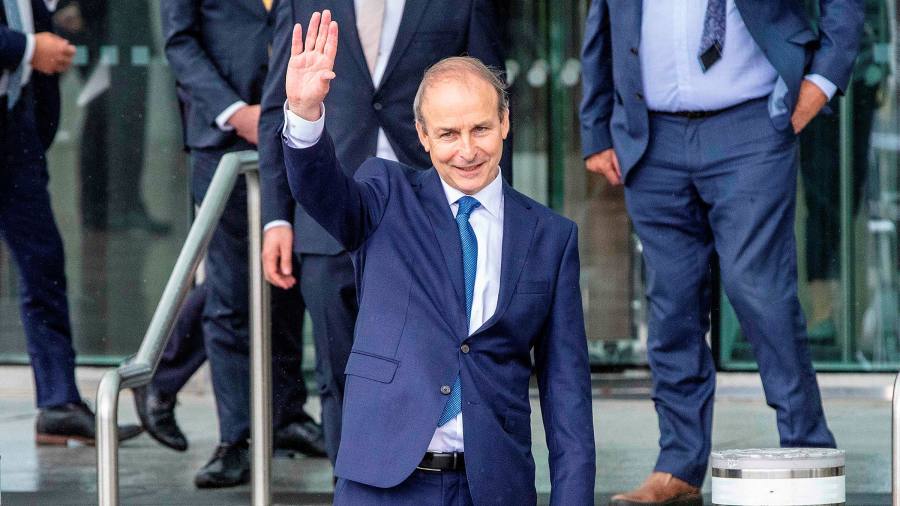 Micheál Martin, a veteran of the party blamed for Ireland’s financial crash and 2010 bailout, has taken over as prime minister as Dublin faces a fresh economic crisis.

But in December 2022 he will have to hand back the office of taoiseach to his predecessor Leo Varadkar — the hefty price for a historic deal between rival parties that have dominated Irish politics for nearly a century without ever ruling together. He leads a three-way coalition between his centrist Fianna Fáil, Mr Varadkar’s centre-right Fine Gael and the Greens.

It follows a February election in which Sinn Féin nationalists, long on the fringes, won the popular vote. Mr Martin won the most seats, Mr Varadkar came third and they needed the Greens to secure a majority. The other parties refused talks with Sinn Féin because of its leftist policies and links to IRA paramilitaries during Northern Ireland’s Troubles.

Installed 140 days after the election, the new coalition was a long time coming. Talks were delayed by coronavirus as the lockdown led to record joblessness, a far cry from rapid pre-election growth.

The economy has largely reopened, with hotels, restaurants and some bars returning on Monday. But data show 465,900 people were unemployed last week due to Covid-19 and the government was paying a special wage subsidy to 410,000 workers.

Jump-starting recovery while keeping the virus under control will be Mr Martin’s primary task as he commences his first working week in the job.

There is no time for quietly settling in

“There’s almost a million people on Covid payments of one type or another so it’s an extraordinary challenge,” said Michael Moynihan, a County Cork lawmaker with Fianna Fáil.

“There are many businesses, on the high street in particular, that may never open their doors again. The human tragedy of that and the economic fallout — that’s what the new taoiseach must confront.”

This is not the first economic emergency to bear down on Mr Martin, who held office as variously foreign, enterprise, health and education minister between 1997 and 2011. He was in the cabinet as the rapid growth of the “Celtic Tiger” years was shattered by a catastrophic banking collapse in 2008. An EU-IMF bailout soon followed, at the height of eurozone debt crisis. He became Fianna Fáil leader shortly afterwards. The party was deposed from power, ushering in a long period in the wilderness.

“He was in the last government that dealt with an economic crisis. He’s experienced across the board in terms of managing a cabinet. So he has a broad base,” said Theresa Reidy of University College Cork, a political analyst.

Mr Martin has apologised for grave economic mismanagement by a party that was long one of Europe’s most successful political organisations because of its ability over decades to win elections. Rebuilding Fianna Fáil, still a work in progress after it lost seats in the February poll, tested his resilience.

Yet the new taoiseach has been persistently criticised for his reluctance to take difficult decisions in government. “He is a deeply committed public servant but he can be indecisive and every profile of him has always made that point,” said Ms Reidy.

After taking office on Saturday the new taoiseach said the nation faced “the fastest-moving recession ever to hit our country and to overcome it we must act with urgency and ambition”.

Mr Martin, a former school teacher from Cork, Ireland’s second city, is the son of a bus driver. He turns 60 in August, making him two decades older than 41-year-old Mr Varadkar, who became known around the world as the face of a rapidly liberalising country during his three years as taoiseach and will now serve as deputy premier.

Although Mr Martin was seen as socially conservative early in his career, his backing for same-sex marriage and abortion put him on the winning side in two landmark referendums to modernise social laws. His support for abortion put him at odds with his own party: more than half its members in the Dáil assembly opposed the 2018 referendum.

With only two-and-a-half years to make his mark, he has pledged to unveil an economic stimulus plan next month. The new coalition has also promised a “medium-term road map” in October to cut the budget deficit, a difficult task given forecasts that the government will spend €30bn more this year than it collects in tax. Dublin is already campaigning in Brussels for a bigger slice of Europe’s new recovery fund.

Mr Martin has pledged to boost housebuilding and overhaul healthcare, key election issues, but he must also achieve ambitious climate-change targets that were the price of Green participation in the coalition deal.

Moody’s, the credit rating agency, has said the coalition’s programme offers “broad policy continuity” on key issues such as Ireland’s low 12.5 per cent corporate tax rate, crucial to an economic model that relies heavily on foreign direct investment. Paschal Donohoe of Fine Gael remains finance minister, a signal that there will be no radical change of fiscal policy.

Brexit policy will remain unchanged. Amid rising risk of a no-deal Brexit at the end of the UK transition from the EU in December, the new government’s “key priority” is to implement the protocol to keep open the border with Northern Ireland. Mr Martin knows his time is short. “There is no time for quietly settling in,” he said.