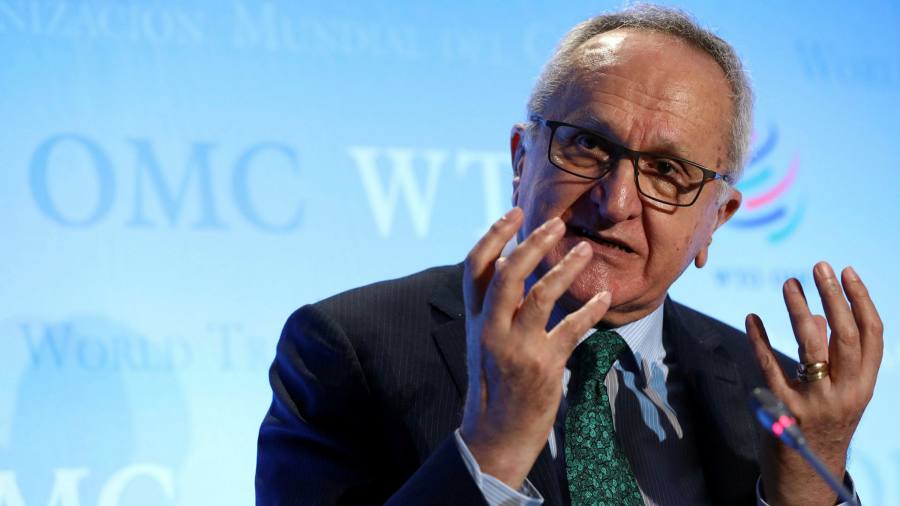 Mexico’s pick to run the World Trade Organization says he can fix its broken dispute resolution mechanism within 100 days, use it to ease US-China trade tensions and keep Washington from quitting the global trade body.

Jesús Seade, a veteran of three decades of negotiating trade agreements — most recently getting the USMCA trade pact between the US, Mexico and Canada across the line — is one of eight candidates to succeed Brazil’s Roberto Azevêdo as director-general after he steps down in September.

The field is led by two female African former ministers — Kenya’s Amina Mohamed, a former trade minister who has chaired the WTO’s general council, and Ngozi Okonjo-Iweala, a former Nigerian finance minister and senior World Bank official. Mr Seade insists he is not disadvantaged by a widespread desire to make the multilateral body’s leadership more diverse.

“Maybe there’s a fascination for someone who comes from a certain continent or is of a certain gender,” Mr Seade told the Financial Times in an interview from Geneva, where the candidates last week pitched their programmes to the WTO’s general council, kicking off what is meant to be a consensus-based selection process.

Mr Seade thinks his resume gives him the edge: stints as the WTO’s deputy director-general and senior posts at the IMF and World Bank working on “dozens and dozens of countries” worldwide. He also notes that he has lived in China and gone head to head with tough US trade representative Robert Lighthizer over USMCA.

“Some candidates have terrific experience but my experience has been much more specific on trade negotiations,” he said.

While he said it was too early to speak of firm support for any candidate, Mexico is relinquishing leadership of the OECD in a move seen as designed to bolster Mr Seade’s chances.

Whoever steps into Mr Azevêdo’s shoes will first have to fix the appellate body — the WTO’s dispute resolution mechanism — that has been at a standstill since last December. The US has exercised a veto and blocked the appointment of new judges to the body, which adjudicates on contested rulings over disputes between members.

Mr Seade locked horns with Mr Lighthizer several times during the USMCA negotiations, including over Washington’s desire for steel and aluminium quotas and labour inspections. But they hammered out compromises after setting out what both sides could accept.

“You need to respond to what is said to you, to engage. If there’s a suggestion you need to say exactly what you buy and don’t buy . . . begin to find a way to converge,” he said of his negotiating style. “I prefer a negotiator that takes risks.”

He would apply the same tactic to the appellate body amid “profoundly different philosophies” in Europe and the US about how it should work.

“I think [the problem] is extremely grave, super serious but quite specific,” he said of the US objections, but this could be addressed “with good robust engaged discussion, negotiation . . . I would hope it can be resolved within my first 100 days”.

“A lot of the trade war is bilateral but . . . a lot of discrepancies should belong in the WTO . . . Let’s put in place together the dispute settlement system and use it in relations including with China,” he said.

He would like other problems arising from US-China discussions to be tackled in Geneva. “We certainly hope to be a helpful partner — sticking my neck out as I have done many times to get results to help them find solutions that are acceptable to both”.

What I can offer is [to be] a forceful and powerful and reliable, honest intermediator

China’s reluctance to relinquish “special and differential treatment” status — being considered a developing nation within the WTO despite also being a global superpower — was a “challenge”, he added. But nations had to advance in negotiations on fisheries, electronic trade and regulation “to create confidence” before tackling tough issues of industrial subsidies, he said.

“It is for [other nations] and China to figure out what can be done . . . What I can offer is [to be] a forceful and powerful and reliable, honest intermediator that will bring them to the table, that will work with them to find the way forward,” he said.

A multilingual Mexican and Lebanese national, Mr Seade, 73, said the “bread and butter” of his career had been working with developing nations, including helping Argentina and Colombia exit financial crises, negotiating debt forgiveness for 15 African nations at the IMF and helping devise Morocco’s sales tax.

He has lived in North and South America — amassing, he said, an enviable collection of Brazilian music — as well as in Europe. He spent more than a decade as a professor in Hong Kong and China, where he picked up enough Mandarin to deliver a speech competently.

He dismissed suggestions the US could pull out of the WTO altogether but stressed that “they have a grudge with the WTO — we have to understand that grudge, and that grudge is not Republican . . . it will be there whoever wins the next elections”.

“We must not have illusions that if [President Trump’s Democrat challenger] Mr [Joe] Biden wins, then it’s all dandy for the WTO. Not at all, we must engage with the US . . . We need to work with them and we need to fix it,” he said.

Then he repeated a joke shared among Mexican trade negotiators when he threw his hat into the ring: “Only Jesus can save the WTO.”