At the end of 2016, Pemex came up with a new strategy: it would focus exclusively on profitable activities.

The plan, a no-brainer for most businesses, was a novelty for Mexico’s state oil company, a national champion created in 1938 after Mexico expropriated US and UK oil assets. Although it left the country’s six refineries working at half-capacity, they were finally back in the black after years of losses.

These days Andrés Manuel López Obrador, the president since 2018 who has bet the nation’s fortunes on Pemex, is pulling the company in the other direction again — even in the face of the coronavirus crisis and oil price collapse.

On Thursday it reported a $23bn quarterly loss, among the biggest in corporate history, with neither its upstream nor its downstream business making money at current prices. Annual losses had already doubled last year to $18bn and the group has amassed $105bn in debt along with unfunded pension liabilities of $77bn. Moody’s last month followed Fitch in cutting its credit rating to junk.

In a statement to the US Securities and Exchange Commission, Pemex acknowledged that its auditors, KPMG, had expressed “substantial doubt . . . as to our ability to continue as a going concern”.

But while other oil groups slash production and investment to weather the storm, Mr López Obrador is showing little appetite to deviate from his promise to revive Pemex by reversing 15 years of production declines.

“The rule book of what not to do is being written by Pemex,” said Pablo Medina at Welligence, an energy consultancy in Houston.

Defying pressure to match other countries’ pledges to cut output by nearly a quarter at an Opec-led meeting this month, Mr López Obrador reluctantly agreed only to a 100,000 barrel a day reduction, or about 6 per cent. 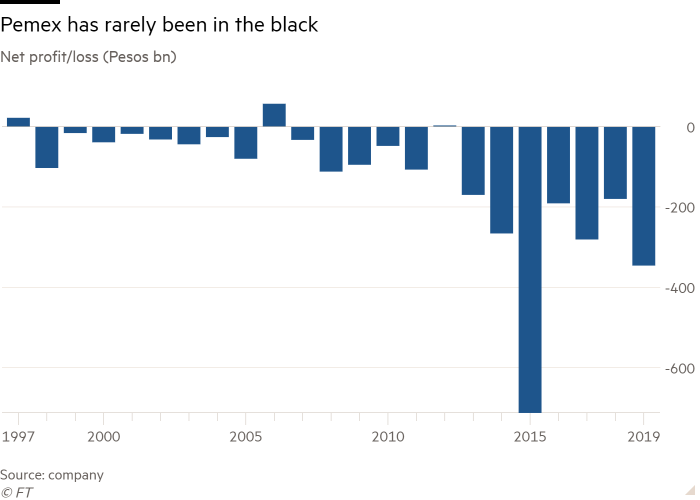 The president has also vowed to nearly double refining output to 1m barrels a day in May despite the fact Pemex’s lossmaking plants operated at a historic low of just 28 per cent capacity in February and that in the first quarter it cost Pemex $12.51 on average to refine every barrel of oil.

“At $20 Brent, there is not a single field in Pemex’s portfolio that is profitable when you consider costs and taxes . . . They lose on the upstream business just by producing,” Mr Medina said. “Now, they’re forcing Pemex to lose more in its downstream business because of negative margins. All for demand that may not exist.”

The reason for Mr López Obrador’s obstinacy is that Pemex has always been more than just an oil company. The group was created as a symbol of national sovereignty and Mexicans pitched in to pay for the expropriation “to consolidate Mexico’s economic independence” by donating everything from chickens to jewellery to the contents of children’s piggy banks.

Under the deal with Opec, Mexico will cut output to 1.681m b/d but the government’s 2020 national production target — on which budget sums are calculated — is 1.85m b/d, meaning Pemex will supply less revenue to national coffers than expected.

Dwindling production already meant Pemex funded only 11 per cent of the national budget last year, roughly a quarter of its contribution to government coffers in 2008, but with government investment to boost production, Mr López Obrador sees the state giant as the motor of national development.

The 66-year-old president, born and raised in the south-eastern oil state of Tabasco during Mexico’s boom years, has rebranded Pemex’s eagle and oil drop logo with the phrase “rescuing sovereignty”. That explains his drive to revive production growth at a company that has consistently made pre-tax profits but been bled dry by high government taxes and hamstrung by bureaucracy and corruption.

Achieving that will be costly.

“I think Pemex will need in the high teens billions of dollars [a year],” said one bond analyst who asked not to be named. “With oil prices where they are now, Pemex isn’t making any ebitda. It’s simple maths. The government is going to have to write some big cheques.”

The Treasury transferred $2.6bn to Pemex last month via a tax cut and the company has told investors it is cutting capital expenditure by $1.6bn and will focus on projects with the “highest economic rationale”.

“Today, more than ever before, Petróleos Mexicanos has the absolute support of the government of Mexico,” it said.

Fitch, which slashed the company’s credit rating to junk last summer and further downgraded twice last month, estimates negative cash flow of as much as $20bn a year.

Pemex has credit lines of $8bn, which analysts expect it to tap in full with $6.7bn in debt repayments due this year. After last month’s downgrade, Ariane Ortiz-Bollin, analyst at Moody’s, said it would now need “recurrent and substantial” state aid to the tune of 2 per cent to 3 per cent of gross domestic product this year.

Mr López Obrador boasted on the oil expropriation anniversary in March of $4-a-barrel production costs, but Mr Medina said the average including tax and operating expenditure was $32 per barrel of oil equivalent, and $47 if drilling costs were factored in.

When it comes to refining, “no one believes they can reach 1m barrels in May”, said one former Pemex insider. Refinery output was 580,400 b/d in February; Mr López Obrador claims it has since risen to 800,000 b/d.

There is an additional problem: the more Pemex’s plants refine, the more low-value fuel oil they produce, “so what comes out of the refineries is worth less than the oil that went in”, said Jorge Andrés Castañeda, an energy consultant. Markets for fuel oil are drying up after its use in shipping was banned.

In addition, Pemex has very little storage capacity and risks running out of space within weeks, according to analysts.

Reducing refining “is something I don’t think is compatible with their ideology”, said Ixchel Castro, an analyst at energy consultancy Wood Mackenzie.

But faced with cratering prices, one former senior Pemex official said the government should halt its controversial $8bn Dos Bocas refinery project and “come up with a real business plan that allows investors to understand where you are going to get returns at today’s oil price”.

That is easier said than done.

As one investor in company put it: “Pemex is a mess, it’s getting worse, and they have no plan to deal with things.”