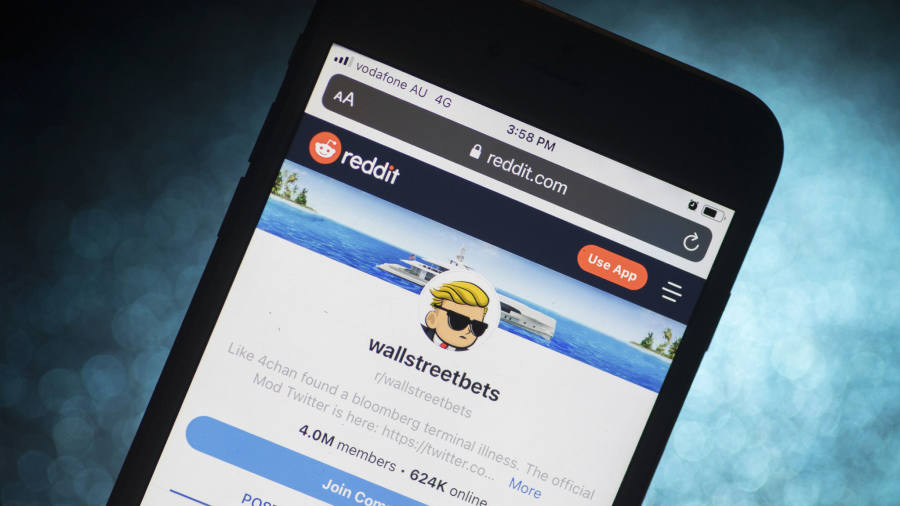 US stock trading volumes soar past 2008 peak in Reddit battle

Philip Stafford in London, Alice Kantor in Paris and Leo Lewis in Tokyo

The frenzied battle between amateur investors and hedge funds pushed trading volumes on Wall Street past a peak set at the height of the financial crisis in 2008.

More than 24bn shares changed hands in the US on Wednesday, exceeding the high in October 2008, according to data from FactSet.

That was matched by a record 57m options contracts traded, surpassing the 48m record set at the onset of the pandemic, data from clearing house Options Clearing Corp showed.

The trading boom is the latest sign of how day traders, equipped with commission-free apps, are wielding a growing influence over global financial markets and forcing professional investors including hedge funds into retreat.

Membership of Reddit’s r/WallStreetBets community, where amateur investors gather and share tips, has exploded in recent days. Between Wednesday and Thursday this week, the number of users rose from 2.8m to 4.3m, with about 316,000 people announcing on the platform that they were buying options, up from a little more than 60,000 on Wednesday.

Speaking at the Saudi Arabia-based Future Investment Initiative event Mr Gorman said: “This short-term phenomenon of all these people getting together on talks sites like Reddit and coordinating a market response…that won’t last.”

“All you need is a correction…and these people are in for a rude awakening…that will happen and this will pass.”

Steve Cohen’s Point72 and Dan Sundheim’s D1 Capital Partners, two of Wall Street’s largest and most powerful hedge funds, are reeling from losses of 15 per cent and 20 per cent respectively this year, after some of their bets were mauled by day traders.

Point72’s losses mostly stem from its exposure to Melvin Capital, a hedge fund that found itself squarely in the crosshairs of retail traders that populate Reddit’s WallStreetBets forum, due to its big short position on GameStop.

Mr Sundheim – who manages about $20bn at D1 – was mainly reeling from the huge rise in AMC Entertainment Holding, which blew up his bet against the struggling cinema operator, according to a person familiar with the matter.

That even two of the industry’s biggest names have been wrong-footed by the social media-fuelled day trader insurgency underscores how the phenomenon is rippling through markets.

An exchange-traded fund managed by Goldman Sachs that buys the most popular hedge fund bets tumbled 4.3 per cent on Wednesday – its worst daily performance since September – and is heading for its worst monthly performance since the depths of the coronavirus crisis in March. In contrast, a Goldman index that tracks the biggest short bets has actually climbed this year.

American Airlines has said it plans to seek new financing as it posted an $8.9bn net loss for the year and expects to burn cash until demand for air travel recovers.

Despite this, American’s stock rose more than 40 per cent at one point in pre-market trading, before trimming those gains to trade 27 per cent higher. A day earlier, retail investors on Reddit’s r/wallstreetbets community had identified the airline, which has been shorted by many investors, as the next company in which they might invest.

Some of those investors said on the forum that the company’s stock is most likely going to get pushed today. “It’s AAL time boys, let’s fly high!!!” wrote one user.

Reddit investors have brought about a massive spike in the stock price of video game retailer GameStop this month, forcing some hedge funds to withdraw from their short positions. During a call with investors, Doug Parker, American’s chief executive, declined to comment on the move.

The Fort Worth, Texas-based airline on Thursday said it reduced its cash burn to $30m a day in the fourth quarter, down from $44m in the previous quarter and nearly $100m in April, when US airlines suffered the worst drop in passenger volumes. It ended the fourth quarter with $14.3bn in liquidity and expects to have $15bn in two months.

Airlines worldwide have been hit hard by the Covid-19 pandemic. Government travel restrictions and people’s fear of contagion have caused traffic levels and revenue to plummet.

American said it expected first-quarter revenue to fall 60 to 65 per cent compared with the first quarter of 2019, which would place it between $6.4bn and $6.9bn.

Retail investment brokerages are limiting trades and raising margin requirements to protect clients as well as platform integrity, as trading in highly volatile shares in Gamestop and AMC continue to rise.

Robinhood, the retail investment platform that has become synonymous with the rise of the retail trader in 2020, moved margin requirements for GameStop and AMC to 100 per cent in order to protect customers. The platform does not allow shorting of equities, or naked options trading.

The flash rally prompted established brokers to put protections in place for investors. Out of “an abundance of caution”, TD Ameritrade and its new owner Charles Schwab have both placed restrictions on short sales for Gamestop and AMC, as well as on margin requirements for certain trades, the companies said.

“It is not uncommon … to place restrictions on some transactions in certain securities in the interest of helping mitigate risks for our clients,” Schwab said.

“It’s affecting risk management,” said Steve Sosnick – chief strategist Interactive Brokers. “We’ve had discussions as to how to manage our risks as brokers– we have to be cognisant of our customers’ risk, particularly those who are using margin. We are having conversations about this now.”

US stock futures climbed on Thursday even as data showed the rate of the US economy’s rebound from the coronavirus-fuelled downturn slowed in the fourth quarter, weighed down by a deadly surge of cases over the holiday season.

Gross domestic product advanced 4 per cent on an annualised basis, according to figures published on Thursday by the US commerce department. Economic output advanced 1 per cent compared with the previous quarter, based on the measure used by other major economies.

Economists had expected the US economy to advance by an annualised 4 per cent, following a 33.4 per cent rise in the third quarter, the strongest annual rate of growth in postwar history.

The US has proven to be one of the more resilient economies in the face of unprecedented shutdowns during the pandemic. Annual GDP will eclipse its level from the end of 2019 around the middle of this year, the IMF estimated this week. The group also raised its US growth forecast for 2021 by two percentage points to 5.1 per cent.

But a resurgence of coronavirus, which prompted a new round of tighter restrictions in some parts of the country, weighed on business activity during the final stretch of 2020 and has kept the labour market on unsteady footing while the rollout of coronavirus vaccines ramps up.

New US jobless claims fell last week but remained historically elevated at 847,000, compared with 914,000 in the previous week.

Futures for the benchmark S&P 500 rose 0.3 per cent. Nasdaq futures trimmed their losses to trade down 0.2 per cent.

The Reddit army of day traders has handed gains worth hundreds of millions of dollars to two big-name creditors of struggling cinema operator AMC Entertainment, after the investment firms swapped risky debt for equity that has skyrocketed in value.

The stock price of AMC, the world’s largest cinema operator, soared 300 per cent to $19.90 on Wednesday, as individual investors drove up the price of the stock. That exceeded the trigger price on $600m of convertible bonds held by Silver Lake Group. The firm has now swapped the debt — which paid interest of 2.95 per cent — into AMC stock at a price of $13.51, according to regulatory filings.

At Wednesday’s closing value, Silver Lake’s stock holding was already worth more than $880m. “Silver Lake has made the trade of a lifetime thanks to the basement bandits,” said one credit hedge fund manager.

Earlier this month, Mudrick Capital Management also swapped AMC debt for equity. The investment firm exchanged $100m in debt for close to 14m shares, which are now worth $273m.

In addition, Mudrick lent the cinema operator a further $100m at an annual interest rate of 15 per cent. As a fee for committing to the deal in December, it also received another 8m shares, which are now worth $164m. The investor was already one of AMC’s largest shareholders.

Frenzied trading in AMC, GameStop and other shares over recent days has been sparked by individual investors corralling together through social media networks such as Reddit. The windfall profits for AMC’s backers stand in contrast to some of the anti-establishment messaging from the day traders, who have forced hedge funds to back away from their bets against struggling companies.

The dramatic moves in markets of recent days underscore how these traders, a mix of have-a-go punters and more sophisticated players, are able to exert influence by using low-cost trading platforms like Robinhood and tools such as options.

We’ll bring you the details of what you need to know on this live coverage page. In the meantime, here are a few key stories: