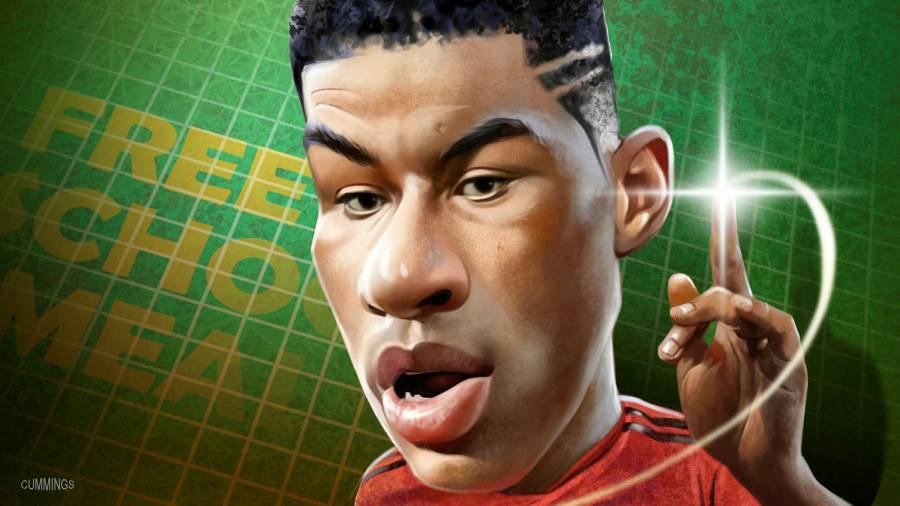 Marcus Rashford was suffering little personal hardship when the coronavirus lockdown began. After all, the 22-year-old is a multi-millionaire striker at Manchester United, the English Premier League club that is one of the world’s glitziest football teams.

But with matches suspended and time on his hands, the star player reflected on his hardscrabble upbringing in Wythenshawe, a working class district in south Manchester, when he relied on his local school to provide free breakfasts and lunches.

Mr Rashford’s musings led to him embarking on a mission to convince the UK government to extend free school meals through the summer break. What began with a June 10 tweet to 2.9m followers snowballed into a massive public campaign, a letter to parliament, support from the opposition Labour party plus backbench Conservative politicians, and, eventually, an embarrassing U-turn by Prime Minister Boris Johnson.

“Food poverty in England is a pandemic that could span generations if we don’t course correct now,” Mr Rashford wrote in a passionate letter to parliamentarians which pointed out 1.3m British children are registered for free school meals but a quarter of them have not had any support since schools were closed.

Mr Johnson, who initially rejected the player’s demands, agreed on Tuesday to release £120m to provide summer meals to disadvantaged pupils. The victory vaulted the player from the back to the front pages of newspapers. Headlines blared: “Rashford 1, PM 0”. It also partially countered a prevalent narrative of callous sports celebrities.

Fellow footballers Raheem Sterling and Megan Rapinoe have also campaigned against inequality and social injustice, using the power that comes from having millions of sports fans roar them on during matches.

“Rashford and Sterling have many times used their platforms to make a better society,” Manchester City manager Pep Guardiola said this week. They don’t “do it to get more money. Fortunately for them, they have enough. They do it to make the world a better world to live in.”

Hunger and the ability to overcome prejudice are part and parcel of Mr Rashford’s rise to prominence. He was born into a single-parent home in 1997 — two years after Mr Johnson, then a newspaper columnist, wrote in The Spectator that single mothers were producing a generation of “ill-raised, ignorant, aggressive and illegitimate children”.

Mr Rashford’s mother Melanie was then working minimum wage jobs and struggling to put food on the table for her five children. She persuaded coaches at Manchester United to accept Mr Rashford, already a precociously talented player who idolised Brazilian striker Ronaldo, into a programme that saw him leave home at age 11, a year earlier than usual.

“I needed to be eating the right food as I was growing, I needed to be close to my teammates, my new school and my new school friends,” he told the BBC. “That was the reason I ended up going at a younger age to the others, it was to help my mum . . . and also get me out of the situation we were in.”

Mr Rashford followed a long line of star academy graduates to wear United’s famous red shirt, including David Beckham. Even so, at aged just 18, he was the youngest Englishman to score at his debut for a national team.

His path has not always been a smooth one. At the start of this season some fans, disappointed by the team’s struggles after its successes of the 1990s and 2000s, heaped abuse on players, including Mr Rashford. Criticism fell away as he scored 19 goals in 31 matches, his highest tally in a season.

Off the pitch, Mr Rashford has gained a far wider following by supporting good causes. Last Christmas, he started a project encouraging people to donate essential items to charities that work with the homeless. During the pandemic, he also donated £100,000 to FareShare, a charity that provides food to vulnerable people across the UK and sought donations to raise another £20m for the cause.

His philanthropic spirit stands in contrast to the common depiction of elite sportspeople as feckless dilettantes unworthy of their sudden wealth.

A case in point is the row that erupted at the start of the coronavirus crisis over Premier League footballers’ pay, collectively estimated at £2.9bn a year. Club owners sought a 30 per cent cut; players resisted, arguing it meant less tax revenues for the NHS. The impasse led Julian Knight, chair of parliament’s digital, culture, media and sport committee, to decry the sport’s “moral vacuum”. Prior to going into politics, Mr Knight wrote a book providing tips on tax avoidance.

Premier League games resumed this week in empty stadiums, but with those in power still on the back foot. Mr Rashford plans to join colleagues before games by “taking a knee” in support of the Black Lives Matter movement — a gesture that foreign secretary Dominic Raab said in a gaffe this week was taken from Game of Thrones.

Politicians may hope that with sport restarting, athletes will be more distracted. But Mr Rashford insists he will continue to speak out.

“You have to do something . . . [As] a young black person struggling in the system, but having found my way,” he has said. “Now I’ve done that, it’s about helping the families that need you most . . . It’s important to have a voice.”