Big bullion banks including HSBC have pulled back from trading gold futures after disruption in the market that flared up in the coronavirus crisis.

Stung by an unprecedented gap between prices for futures and physical gold in March that contributed to a $200m paper loss for HSBC in one day, banks have pulled back, said traders.

The move has helped to drag daily trading volumes for futures contracts on New York’s Comex exchange down to the levels seen at the start of the year, even as gold prices have climbed to seven-year highs at around $1,700 per troy ounce.

Market specialists said banks’ partial withdrawal shows that the fragilities exposed by the darkest points of the coronavirus crisis could reshape how banks trade the precious metal, potentially accelerating a shift by clients into exchange-traded gold.

“People have typically gravitated towards the Comex to hedge their physical stockpiles [of gold], but when you have this global disconnect you’ll become very cautious,” said Adrian Ash, head of research for BullionVault, an online gold platform.

The price of gold is based mainly on physical trading handled by banks in London, where HSBC and JPMorgan dominate. They typically take a short position in gold futures in New York to hedge their exposure to a fall in the spot price. 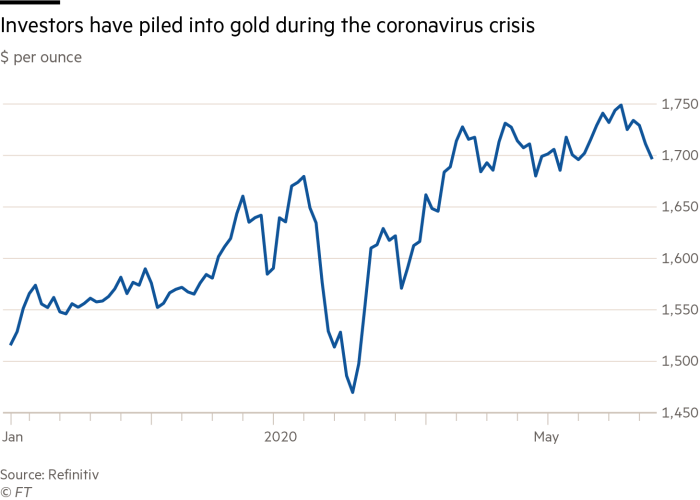 But in March, the sudden closure of gold refineries in Switzerland and the lack of commercial flights transporting gold around the world pushed the price of gold futures in New York to a record $70 above the price of physical gold in London, far beyond the typical gap of a few dollars.

That divergence left HSBC sitting on a $200m mark-to-market loss, the bank said in a filing this month, citing the “unprecedented widening” of the spread, and “Covid-19-related challenges in gold refining and transportation”.

The unrealised losses, which were also partly due to a reduction in foreign exchange and equity volatility as well as a tightening in credit spreads, have been largely recouped, according to a person familiar with the bank’s performance.

Comex gold futures trading volumes have since dropped — a fall that market participants attribute in part to lighter activity from banks. Since January, the total number of outstanding gold futures contracts on the Comex exchange has fallen more than 30 per cent.

“While we have seen lower futures volumes traded on Comex in recent weeks because of the exchange-for-physical price dislocation in March, Comex remains one of many trading venues we and our clients use,” said HSBC.

JPMorgan, ICBC Standard Bank and UBS — the other large bullion traders — declined to comment. Meanwhile, Canada’s Scotiabank is withdrawing from the gold market and said this week it had set aside $168m to cover the closure of those operations and a separate US government investigation into its activities.

“What banks don’t want to be doing is adding to [futures] positions. Risk managers for years thought it was a safe position, but we’ve seen now that this is no longer a stable spread,” said John Reade, a former Paulson & Co gold trader who now works for the World Gold Council.

The CME Group, which owns the Comex exchange, said it is “the destination for global precious metals risk management”.

“Customers across the global precious metals value chain, including the London gold market, rely on the price discovery and risk transfer that CME Group’s gold products provide,” it said.

Banks are now choosing to hedge their customers’ gold trades through other means such as using swaps in the London market, according to people familiar with the market. The volume of gold trading in London’s over-the-counter market has frequently surpassed that of Comex since March, according to the London Bullion Market Association.