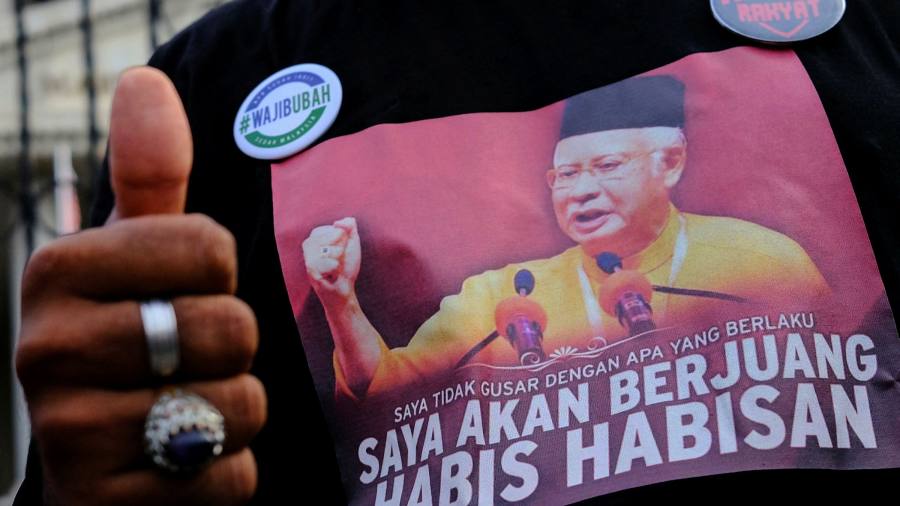 Malaysia’s Najib Razak has been found guilty in a corruption trial linked to the disgraced state investment fund 1MDB, marking the first time the country’s courts have convicted a former prime minister.

The verdict comes just days after Malaysia struck a $3.9bn landmark settlement with Goldman Sachs over losses the south-east Asian country suffered in the 1MDB scandal.

Malaysia’s high court found Mr Najib guilty on seven charges including money laundering, criminal breach of trust and abuse of power. He has yet to be sentenced and the hearing was still ongoing on Tuesday afternoon.

The case is only the first trial involving Mr Najib. He faces dozens more charges linked to 1MDB and other government entities, to which he has pleaded not guilty.

The verdict marks a pivotal moment for Malaysia’s probe into 1MDB, which was launched by Mahathir Mohamad, the former prime minister who ousted Mr Najib in elections in 2018.

The judgment is also a test for Malaysia’s new government led by Muhyiddin Yassin, whose coalition is dominated by the United Malays National Organisation, Mr Najib’s own party that led the country for six decades.

Together with the Goldman settlement, the verdict offers a chance for the new government to put the 1MDB scandal behind it.

Tuesday’s trial is for wrongdoing linked to SRC International, a former subsidiary of 1MDB. Mr Najib launched 1MDB in 2009. The US Department of Justice alleges $4.5bn has gone missing from the state investment fund. The former leader could face up to life in prison.

Goldman’s involvement stems from 2012 and 2013, when it arranged three bond sales for 1MDB, raising $6.5bn. Much of the money was ultimately stolen. Goldman received $600m in fees for the bonds — a sum Malaysia has said was excessive.

Among the allegations in Tuesday’s trial, Mr Najib was accused of receiving illicit transfers totalling RM42m ($9.9m) from SRC International into his personal accounts at AmIslamic Bank in 2014.

Mr Najib pleaded not guilty to the charges. His defence has argued that Jho Low, the Malaysian financier accused of masterminding the 1MDB fraud, and others led Mr Najib to believe the transfers were a gift from the Saudi royal family. Mr Low denies wrongdoing and remains at large.