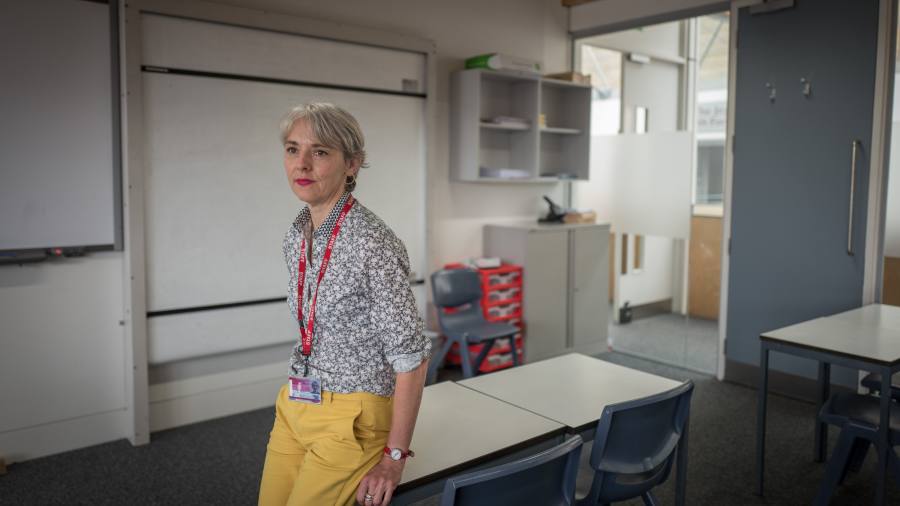 The picture was taken on a sunny day in 1968 in the playground at Gospel Oak primary school in north London. I am sitting cross-legged in the front row, wearing a pink and orange flowery mini dress. There are 35 of us and, with the exception of the girl sitting a few along from me who had one Asian parent, we are all white.

From Gospel Oak I went to Camden School for Girls, a state grammar school a mile from where I lived. I have just unfurled a long school photo from 1976. I’m at the back, as I’m by now in the sixth form. Among 700 students, I can see two black faces.

Later, at Lady Margaret Hall, Oxford, it was the same story, only posher. After some digging, I’ve found the matriculation picture and can see myself, wearing my black subfusc hat at a ridiculously rakish angle, trying (and failing) to prove I am different to the mainly privately educated white women who surround me.

There is no group photo of my year at JPMorgan, the investment bank I joined after leaving Oxford. But I don’t need one, as I remember the line-up well enough. On my training programme there were nine of us: all Oxbridge, all white. I was the diverse one, not through race or class but because I was the only woman. When I joined the FT a few years later, I found journalism was ever so slightly more female than banking but no more racially mixed.

By the time I left the FT I had spent the best part of six decades associating almost exclusively with people who had been to top universities and did grandish jobs and were all white. I sometimes felt sheepish about this but never thought it was my fault. I was merely a product of class, generation, education and profession.

The killing by police officers of George Floyd, and the protests that followed, have made all of us stop and think about race. They have made white liberals everywhere start examining their own behaviour for traces of racism. For me, this uncomfortable audit began, not with the killing of a black man in Minnesota, but three years earlier, when I started teaching in a school in Hackney. At the age of 58 I was lifted out of a world in which everyone was like me into a world where I was in a minority as a white Brit. My pupils’ families came from all over the place: first-, second- and sometimes third-generation immigrants from Nigeria and Ghana, from the Caribbean, from Turkey and Bangladesh and Vietnam.

My ignorance of these communities was humiliatingly obvious from the first time I tried to take a register. There were 32 names on the computer screen in front of me, of which only 10 could I pronounce without effort. I could just about do Yusuf. But what about Kujoe, Igbekoyi or Djimon? Name after name I mispronounced. I felt I had a large sign over my head that read: this woman is a complete idiot. She is almost certainly a racist too.

As time went on, I got better at names (and have now forgotten why I ever found them so hard) but made other, worse, mistakes. In my second year I was teaching a business studies class about ethics. “Companies,” I explained to the class “are desperate to prove to the world that they are whiter than white.” There was an intake of breath. A couple of the students exchanged glances. The old-fashioned phrase, which had seemed innocuous as it formed in my head, was ugly and wrong the minute it emerged from my mouth into the classroom.

In the next split second I made a calculation. Should I stop the lesson and apologise? Or might this open an entire Pandora’s box of grievances? I decided to plough on and pretend nothing had happened. Because the school is so strict, no one challenged me directly, but I was shaken. It is a phrase I will never use again.

That evening, I rang an old journalist friend and told him about my gaffe and how stupid I felt for having made it. “How ridiculous,” he exclaimed. “Whiter than white isn’t racist. It comes from a soap advertisement. I’m amazed that you, who used to be the most fearlessly un-PC person I know, are giving in to all this.”

There had been no “giving in”, I snapped. It wasn’t a question of being “politically correct”. The matter was as simple as this: if I say something that causes offence, then I have to learn to stop saying it. Right away.

Underlying all this is a big question I don’t know the answer to. When I am teaching, is it my job to think about race constantly, or never to think about it? Until recently, I would have said the latter. What I am being paid to do is to teach economics and make students believe that a positive externality is a wondrous thing. If I make a good fist of that, I’m helping all my students — the boy who shares a two-room flat with his Bangladeshi mother and five siblings as well as the girl who lives in a big house on Victoria Park and whose father is a high-up exec at the BBC.

In my first year as a trainee teacher, I volunteered to help with the after-school debating club. I thought I’d be in my element: I might not yet have figured out how to teach, but I did know how to argue. The club was run by an inspirational young teacher who liked to pick incendiary subjects. One day he chose “This house believes there should be quotas for ethnic minority teachers” — a particularly sensitive topic given that, in this school, black, Asian and minority ethnic students made up about 75 per cent of the total, while the overwhelming majority of the teachers were white.

I was given the proposition side to coach but was of little use. With no help from me, my team came up with three strong arguments. One: black teachers make better role models for black students. Two: black students are more comfortable seeking help from black teachers, who are more likely to understand some of their problems. Three: the only way of getting more black teachers is through quotas; otherwise they are held back by racism.

I listened to the debate (won hands-down by my side), feeling increasingly awkward. It wasn’t that I felt apologetic about being white, but I did wonder whether I could be quite as useful a teacher in this school as I hoped I would be. Later I asked two black teacher friends what they thought about it. Both said racism — of the subtle and not-so-subtle kind — had held them back, and both said that black students often came to them to complain that they got more detentions than the white students.

This made me doubly uncomfortable. First, as I’ve never been at the receiving end of racism, I tend to downplay reports of it by others. Second, it occurred to me that the kids who sit in my after-school detentions are mainly boys and mainly black. I am confident that any kid I put in detention has broken one of the school’s many rules. But are there white kids who have also offended yet who I have somehow let off the hook? I hope not, but how can I be sure? It’s another thing to worry about.

I suspect that, like everyone on earth, I have a whole bundle of unconscious biases. I know my heart is in the right place on race, but I also know my heart is an irrelevant organ when it comes to traversing this minefield. I need instruction.

I became aware just how bad things were a few months ago, when I was a judge in a public-speaking competition open to all secondary schools in Hackney. Each school fielded two 15-year-olds who had given the best speeches on any topic they wanted to talk about. On the night, I sat at the judges’ table in an assembly hall and listened to two dozen teenagers project their voices and speak from the heart without notes. It should have been uplifting, but I left feeling grimmer than when I’d arrived. Of the finalists, eight were black girls, the first of whom gave a powerful talk about how she as a young black woman felt marginalised. The next girl gave a speech about how ideals of female beauty did not include black beauty. Six further talks followed along similar lines. The performances varied from medium to electrifying but the topic was the same.

The judging took place about 200 yards from where I live, but I might as well have stepped into another world. I suppose I’d assumed that racism in London was less of a problem than it was a generation earlier, so it was a shock to discover that this was the only theme the girls wished to talk about. I now see that what things used to be like is an irrelevance to these young women. What matters to them is the present — and their account of it is both important and distressing.

I don’t know what the answer is in policy terms. I don’t even know what, if anything, I can do in my own classroom — apart from trying to avoid dropping any more antediluvian clangers. In the absence of any better ideas, all I think I can do for now is to listen to my students talking about their world, while continuing to talk to them about mine. I am educating them. And they are educating me.