Turkey’s lira hit a record low on Thursday after authorities announced a crackdown on “manipulation” by foreign banks based in London.

The lira slipped to a low of 7.2598 per US dollar in morning trading, reflecting rising investor concern over the country’s economic strength and ability to defend its currency during a turbulent period for global financial markets.

The fall took the currency to below the previous trough hit during the 2018 currency crisis, which triggered the country’s first recession in a decade.

The 0.8 per cent fall on Thursday came after a 1.7 per cent tumble in the previous session as Berat Albayrak, Turkey’s finance minister and son-in-law of the president, sought to reassure investors that the economy would quickly bounce back from the blow dealt by coronavirus.

Turkey’s state media depicted the plunge in the currency as an orchestrated attack organised from London by unnamed foreign banks.

The Anadolu news agency reported that regulatory authorities would be launching legal proceedings against the institutions, and said they could face “heavy fines and transaction bans”. The move had echoes of a 2019 threat to investigate JPMorgan for advising clients to short the lira.

Turkey’s authorities also published new regulations on Thursday designed to curb “manipulative and misleading transactions in the financial markets”. These include “trying to benefit from fluctuations or shallow trading in the market” by using tools such as the currency or credit default swaps, and the spreading of “incorrect or misleading” information on financial markets by any mass media tool.

Yaman Akdeniz, a lawyer and academic based at Istanbul’s Bilgi University, said: “In short, they are telling experts — banks, the media or anybody interested in financial issues — not to talk about the financial crisis ongoing in Turkey.”

He said the language in the text was “deliberately left vague” as part of what he described as an attempt to “to control anything related to meaningful discussion about what is happening in Turkey”.

Turkey has faced mounting investor concern over its ability to weather the crisis triggered by the coronavirus pandemic.

Tatha Ghose, analyst at Commerzbank in London, described a “perfect storm” for the Turkish lira.

“The lira is depreciating at an accelerating pace even as Turkish policymakers scramble to find a convincing policy response,” he said, adding that the country’s net foreign currency reserves had “evaporated”.

Those reserves are a key measure of a country’s ability to defend its currency during times of financial tumult such as the one caused by the pandemic. 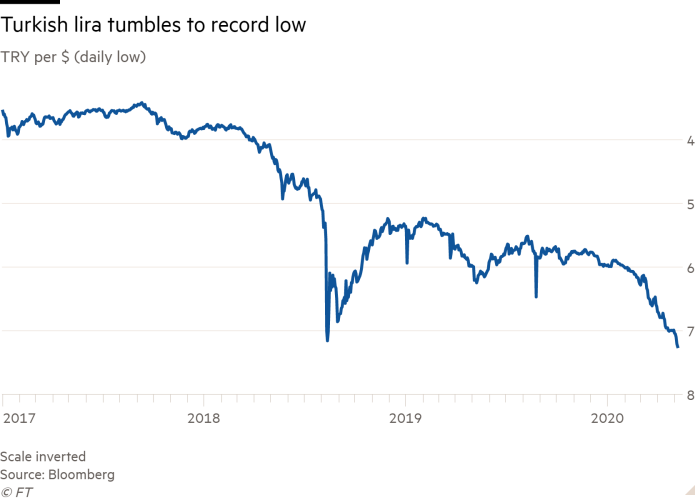 The central bank has drastically cut interest rates in a bid to use cheap financing to prop up the economy, but the reductions mean the benchmark interest rate is now below the annual level of consumer price inflation. This has dented returns from buying lira-denominated assets, turning “momentum” against the currency, said Mr Ghose.

Mr Albayrak on Wednesday used a conference call with more than 2,000 foreign investors to argue that Turkey was well placed to withstand the fallout from Covid-19. He said the country had adequate foreign currency reserves and strong banks, adding that Ankara was in talks with international central banks about securing swap lines to ease liquidity concerns.

Economists and investors have said that reaching an agreement with the Federal Reserve could supply Turkey with badly needed dollars.

But a senior Fed official appeared to brush away that prospect later on Wednesday. Asked about the prospect of extending support to Turkey or other similar countries, he said swap lines were for countries that had a relationship of “mutual trust” with the US and the highest credit standards, according to a Reuters report.