The Seif family thought they had endured the worst that successive Egyptian regimes could throw at them. During years of activism by father, mother, daughters and son, all had been arrested advocating for human rights and greater freedoms.

But even they were shocked last month when three of the family were attacked and one daughter was jailed in a 24 hour period — part of the latest chapter in a wave of crackdowns by president Abdel Fattah el-Sisi that has become more brazen and wider in scope this year, according to human rights groups.

“We honestly thought we had gone through the worst with Sisi and everything else was like the aftermath of a disaster, but it seems they still have so many other violent realities for us,” said Mona Seif, whose brother, Alaa Abdel-Fattah, and sister, Sanaa, are in prison. “I don’t think I’ve ever experienced such suffocating times on so many levels.” 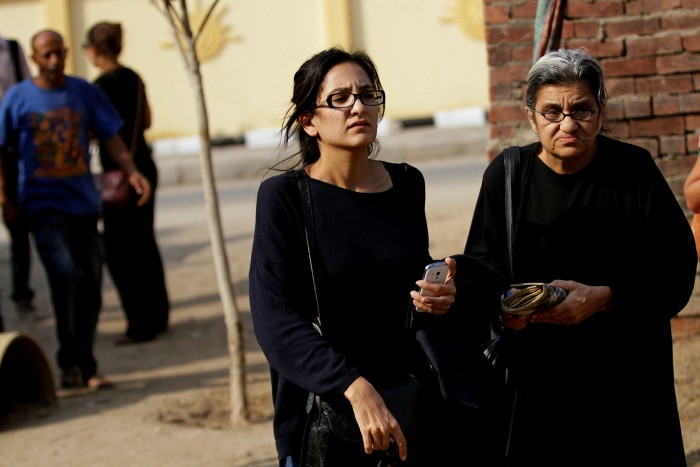 Mona Seif, left, said she and her mother Laila Soueif, right, were beaten in state-sponsored attack in June after which her sister was arrested. © Hussein Tallal/AP

Sanaa, 26, is one of more than 70 people, including at least nine doctors and medical workers, five journalists, two lawyers “arbitrarily arrested” in Egypt between March and June, according to Amnesty International, as the country grapples with the coronavirus outbreak and its economic consequences.

“Definitely we are seeing an uptick in arrests, not just in numbers, but also in terms of the profile of the people the government is targeting,” said Hussein Baoumi, a researcher at Amnesty.

Egypt’s human rights environment deteriorated rapidly after Mr Sisi, a former military chief of staff, led a 2013 popularly backed coup that toppled Mohamed Morsi, the country’s first democratically elected president. Initially, Morsi’s Muslim Brotherhood was the focus of security agencies. At least 800 of the Islamist group’s members and supporters were killed in a crackdown at the Rabaa al Adawiya mosque in Cairo in August 2013 and thousands have been imprisoned in the years since.

But with the regime seemingly bent on crushing any forms of dissent, dozens of secular activists, journalists, bloggers and lawyers have also become targets during waves of crackdowns — notably around the 2018 presidential elections, which Mr Sisi won with 98 per cent of the vote, and after a rare outburst of street protests in September.

Often they are charged in security courts with offences similar to suspected Islamists. In recent weeks, medical workers who have criticised the government’s response to coronavirus citing, for example, a lack of protective equipment, have been accused of “spreading false news” and “terrorism”, according to activists.

There have been over 71,000 confirmed coronavirus cases in Egypt and more than 3,000 deaths. The government, which insists its security services abide by the law, did not respond to a request for comment.

Sanaa’s ordeal began when she, her mother and Mona were beaten with sticks by half a dozen women in what they think was a state-sponsored attack as they waited outside Tora prison, south of Cairo, in the hope of receiving a letter from Alaa Abdel-Fattah. An icon of the 2011 revolution that ousted veteran president Hosni Mubarak, Mr Abdel-Fattah was jailed during the September protests, six months after he had served a five-year term, despite not taking part in the demonstrations.

The day after they were attacked, Sanaa, Mona and their mother went to the state prosecutor’s office to lodge a complaint. While a battered and bruised Sanaa was at an entry barrier with a friend, plain-clothes men bundled her into a minibus and took her to the Supreme State Security Prosecution, which investigates national security threats. She was charged with disseminating false news, inciting terrorist crimes and misuse of social media, Amnesty said. She was transferred to a prison and the family said they have had no contact with her since.

Other recent high profile arrests include Nora Younis, editor of the Al-Manassa news website, and five cousins of Mohamed Soltan, a US-based Egyptian rights advocate who last month filed a complaint in a US court against Hazem Abdel Aziz el-Beblawi, a former prime minister.

Nora Younis, editor of the Al-Manassa news website, was arrested in June and then released © Lambert/ullstein bild/Getty

Mohamed Soltan, a US-based Egyptian rights advocate last month filed a complaint in a US court against the former prime minister, Hazem Abdel Aziz el-Beblawi. Five of his cousins in Egypt have since been arrested. © Pete Marovich/The Washington Post/Getty

In the civil suit, Mr Soltan alleges that he was tortured in 2013 while in an Egyptian prison when Mr Beblawi, now an executive director on the IMF’s board, was premier. Mr Beblawi did not respond to an emailed request for comment.

Ms Younis was released on bail, but Mr Soltan’s cousins are in prison, charged, he believed, with membership of a terrorist organisation and spreading false information.

Mr Soltan said he thought his cousins had been detained in retaliation for the legal case he filed in the US, in which Mr Sisi is mentioned.

“Sisi’s repression aims to achieve deterrence. You will take the injustice and abuse, and you will shut up. If you don’t, your loved ones will stand to pay,” Mr Soltan said, whose father — a former member of the Morsi government — has been in prison for seven years.

Like others, he said the coronavirus outbreak has become a pretext to extend a crackdown that began last year, with the regime emboldened by a sense that the outside world is distracted by the pandemic.

“They are far more emboldened now,” said a human-rights activist in Cairo. “‘We understand the importance of where we are geopolitically and you have to live with it’, and basically everybody [western powers] has lived with it.”

Mr Sisi, who is credited with stabilising the country and reviving the economy, is viewed as an important ally of the west, particularly in the fight against extremism. Last year, US President Donald Trump jokingly described Mr Sisi as his “favourite dictator”.

Underpinning the oppression, is the legacy of the 2011 revolution and the desire among regime officials to prevent any chance of a repeat as the 10th anniversary approaches, the activist added, asking not to be identified by name.

“The same people that lost the battle in 2011 — as they see it — are still there [in the security agencies],” the activist said. “They spent two and a half years, until the 2013 coup, listening to what was beyond [normal] criticism, their names mentioned, the institutions they represented, and now they will not accept . . . that anyone will be allowed to talk.”