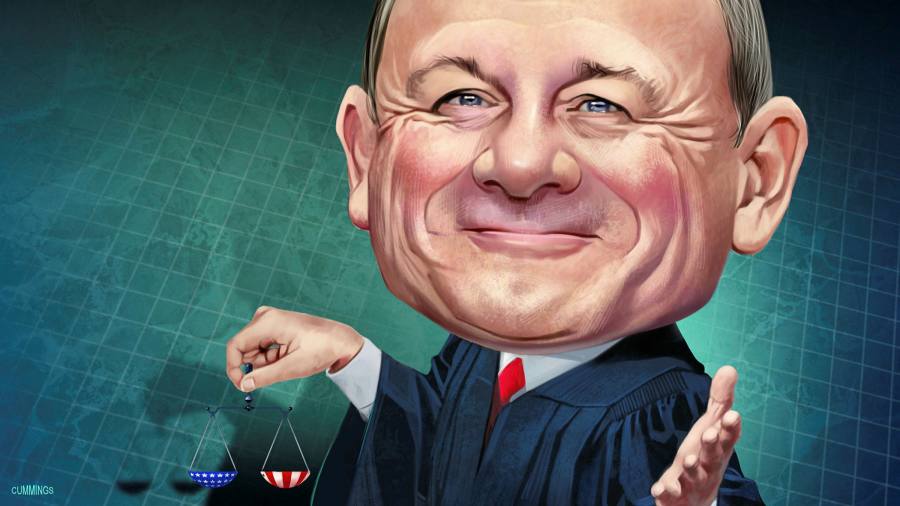 As the titular head of the American judiciary, Chief Justice John Roberts has not shied away from asserting its independence.

Back in 2018, when Donald Trump denounced several judges who ruled against his administration, Mr Roberts issued a sharp rebuke to the US president.

“We do not have Obama judges or Trump judges, Bush judges or Clinton judges,” Mr Roberts wrote, adding that judges did “their level best to do equal right to those appearing before them.”

Now Mr Roberts, a conservative legal wunderkind who first became a judge in 2003, has fired new shots in his long war against perceptions that the Supreme Court is just another political body, riven with partisan divisions like the rest of Washington.

In a trio of high profile cases over the last three weeks, Roberts joined the court’s liberal wing, helping them to victories on the hot button issues of abortion, immigration and gay and transgender rights. “It’s a longstanding inclination on his part to try to keep the Supreme Court from being perceived as overly political one way or the other,” says Michael McConnell, a Stanford law professor and ex-judge who has been friends with Mr Roberts since both worked as Supreme Court clerks. “John is trying to combat that . . . That’s not the way he sees the court.”

At 65, Mr Roberts has been the court’s chief justice for 14 years, but changes to the membership have recently made his the swing vote, giving him even more influence over its decisions.

It’s a fitting spot for a man who, as a precocious 13-year-old in 1968, wrote in an application to a rigorous boys Catholic private school: “I’ve always wanted to stay ahead of the crowd.”

Born to a steel company executive father and homemaker mother, Mr Roberts grew up in Indiana with his three sisters. At school, he was a member of the choir and captain of the American football team.

While attending Harvard for college and law school in the 1970s, he became a committed conservative and spent the early part of his career mixing law and partisan politics. As he put it in 2006, he had “kind of reacted against the orthodoxy that was established there.”

After clerking for then-Supreme Court justice William Rehnquist, he did stints in private practice and in several Republican administrations. George HW Bush nominated him to an appeals court seat but lost the 1992 election before Mr Roberts was confirmed.

While at the firm now known as Hogan Lovells, Mr Roberts established himself as a leading appellate court lawyer. “He was considered the best Supreme Court advocate of his generation,” says Neal Katyal, a former acting solicitor general under Barack Obama now with the same firm.

Mr Roberts is a witty advocate who keeps his cards close to his chest and “has long shown a keen interest in how he is portrayed in the media”, writes Joan Biskupic, the veteran Supreme Court reporter, in a 2019 biography.

“He’s always been reserved,” says Michael Luttig, a former federal judge who has known Mr Roberts since they worked together for Ronald Reagan. “He doesn’t gather friends around him just so he has a lot of friends,” he said.

After aiding George W Bush’s legal fight in the 2000 election recount controversy, Mr Roberts was appointed first to an appeals court and then the highest court in 2005. Described by supporters as something of a golden boy, erudite and decent, he and his wife, Jane — a top legal recruiter — had married in their 40s and adopted two children, a boy and a girl. As Mr Roberts’ nomination was announced at the White House, his son, Jack, caused a stir off camera, play acting as Spiderman.

Set to be the youngest Chief Justice in more than 200 years, he sauntered into his confirmation hearings with a very thin written record, making it hard for liberals to attack him. He was confirmed with yes votes from half of the Democratic senators at the time.

Since his confirmation, the Supreme Court has developed a decidedly conservative cast, unleashing corporate spending in elections, limiting the reach of laws designed to combat racial discrimination and freeing up states to put barriers in front of would-be voters. When the court legalised gay marriage in 2015, the chief justice issued a sharply worded dissent. He has repeatedly voted in favour of new restrictions on abortion. And in 2017, he upheld Mr Trump’s ban on travellers from mostly Muslim countries.

Yet at key moments, he has departed from the Republican line. He upheld the Affordable Care Act, Mr Obama’s signature healthcare policy, in 2012, and voted last month to extend protections against job discrimination to LGBT+ people and prevented Mr Trump from cancelling protections for young undocumented immigrants. On Monday he provided the deciding vote against a Louisiana abortion law, saying it was too similar to one that had been struck down — with him in dissent — four years earlier.

“He’s not a secret liberal, nor has he gone remotely soft,” said Leah Litman, an assistant professor at the University of Michigan Law School and former Supreme Court clerk. Mr Roberts “is an institutionalist in the sense that he cares about the perception of the court, and he doesn’t think of himself as someone who is political”.

As Mr Roberts put it in 2016, Washington may expect judges to be ideologically reliable but “we don’t work as Democrats or Republicans.”