“We are tired. We are tired of being beaten by policemen, we are tired of seeing our people locked up in jail over and over again. And then you holler, ‘be patient’. How long can we be patient? We want our freedom and we want it now”.

John Lewis, who made those remarks in late August 1963 in front of Washington DC’s Lincoln Memorial, died on Friday night, after a lifetime as a totemic figure in the US civil rights movement and more than three decades as a Democratic congressman.

At the same gathering, the March on Washington, more than half a century ago, Martin Luther King Jr, who was little more than a decade older and became the emblem of America’s postwar battles against racial segregation and desegregation, delivered his seminal “I have a dream” speech.

Lewis’s legacy as a pursuer of dogged and courageous, yet non-violent, fights for equality in America, forged on the streets of the US South and in the halls of Capitol Hill, is comparably powerful and enduring.

“The country lost a hero last night, a movement lost an icon, and I lost a personal friend,” Jim Clyburn, the congressman from South Carolina who knew Lewis since 1960, said in a short video statement on Saturday morning.

Barack Obama, the first African-American US president, wrote on Medium that he had told Lewis he “stood on his shoulders” and had only reached the White House because of the “sacrifices” made by Lewis. “He will continue, even in his passing, to serve as a beacon in that long journey towards a more perfect union.” 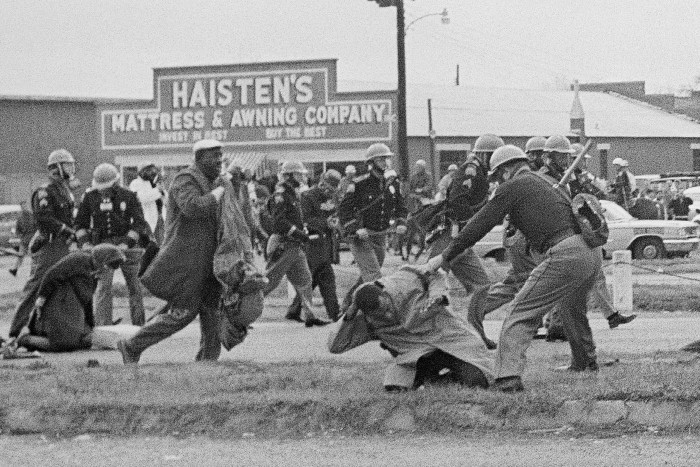 A state trooper swings a club at John Lewis, during a civil rights voting march in Selma, Alabama in 1965 © AP

Lewis was born and grew up in Troy, in rural Alabama, as one of ten children of sharecroppers. By his late teens, when he headed to Nashville, Tennessee, to study at the American Baptist Theological Seminary and Fisk University, two historically black colleges, Lewis had already developed an acute sense of the injustice of US society, and a determination to confront it.

Lewis began participating in bus boycotts, sit-ins, and demonstrations, had his first meetings with key figures in the civil rights movement like Rosa Parks and King Jr, and joined the Student Non-Violent Coordinating Committee, led by Ella Baker, which played a pivotal role in fuelling youth activism against racism in America.

“When I was growing up, my mother, my father, my grandparents, my great-grandparents told us when we asked about segregation, racial discrimination: ‘Don’t get in trouble. Don’t get in the way.’” Lewis told NPR in 2005. “But Dr King, Rosa Parks and so many others gave us examples . . . I don’t know where our nation, where we were would be as a people if it hadn’t been for nonviolent action,” he added.

The peaceful nature of Lewis’s opposition did not protect him from run-ins with the police. He was arrested some 40 times, and subjected to several life-threatening beatings from law enforcement and opponents of the movement. In 1961, Lewis was attacked at a Greyhound bus station in Rock Hill, South Carolina for entering a “whites-only” waiting room, as he travelled through the South to protest segregated transportation.

“I remember him laying there, and it was blood on the ground and somebody done called the police,” said the late Elwin Wilson, a member of the Ku Klux Klan who participated in the assault on Lewis and later apologised and repented, as he described the scene, according to the Atlanta Journal-Constitution.

But Lewis’ most dramatic brush with police brutality came on “Bloody Sunday”, in March 1965, as he and around 600 protesters marched across the Edmund Pettus Bridge in Selma, Alabama to advocate for their voting rights and to express their anger at the killing of Jimmie Lee Jackson, a fellow activist, at the hands of police a few weeks earlier. After the demonstrators refused to back down upon reaching the apex of the bridge, Alabama state troopers assaulted the crowd and fired tear gas; Lewis suffered a fractured skull.

“Selma held a very special place in his heart, he came back time and time again to honour those foot soldiers he marched alongside, to pay tribute to those who shed a little blood on that bridge,” Terri Sewell, the first black congresswoman from Alabama whose district includes Selma and grew up in the town, told the FT. “Selma loved John and John loved Selma,” she added.

The scene in Selma provoked outrage across the US, including within the White House, where Lyndon Johnson was president. After a federal court ruled that the protests were legal, National Guard members escorted the protesters across the same bridge and on a 50-mile trek to Montgomery, Alabama, in what is often regarded as a critical juncture in the civil rights struggle.

“It was a turning point and culmination, if that makes sense,” said Victoria Wolcott, a history professor and civil rights expert at the University at Buffalo. “It did galvanise public opinion, and many people have argued or many historians have argued that the Selma march led directly to the signing of the Voting Rights Act. It was what Johnson and his administration needed,” she added.

Lewis began working in government during Jimmy Carter’s administration on anti-poverty policy, but then was elected to be a member of Atlanta’s city council in his adoptive state of Georgia. In 1986, he was elected to a seat in the US House of Representatives, which he held ever since, emerging as one of the American legislature’s most prominent liberal politicians, with a staunchly held pacifist, antimilitarist streak, including opposition to the Iraq war and high levels of defence spending.

But it was Lewis’s commitment to waging peaceful battles in favour of racial justice that dominated his life — and gained particular salience in his final months this year, as he was battling pancreatic cancer and still found time to encourage and inspire the thousands of Americans who took to the streets in the wake of the killing of George Floyd at the hands of Minneapolis police.

“It was very moving, very moving to see hundreds and thousands of people from all over America and around the world take to the streets to speak up, to speak out, to get in what I call good trouble,” Lewis told CBS in early June. “People now understand what the struggle was all about. It’s another step down the very, very long road toward freedom, justice for all humankind,” he added.

Prof Wolcott notes that a certain utopianism was always at the heart of Lewis’ philosophy, until the very end. “He always had a sense of hopefulness about the possibility of full equality, the possibility of the Beloved Community. He used the word love, all the time actually.”

Ms Sewell says that throughout all of her interactions with him over the years, Lewis had never lost “the common touch” and his legacy could continue through a new generation of activists. “His humility, his grace, his love of people and love of country are something that will live on, he sowed so many seeds of hope,” she told the FT. “What we are currently living through reminds us that we are still in search of that more perfect union, but John would tell us to never give up, never give in, keep the faith”.