Joe Biden, the presumptive Democratic nominee for president, has vowed to push the Federal Reserve to narrow racial gaps in “jobs, wages and wealth” as he released a plan to tackle economic inequalities that have damaged minority communities for decades.

Mr Biden’s proposal attempts to address the economic dimension of the “Black Lives Matter” movement, which led protests across the country against police brutality in recent weeks while stressing the importance of redressing economic disparities.

It comes at a crucial juncture in Mr Biden’s campaign to unseat Donald Trump in the White House. He is preparing to choose his vice-president and formally clinch his party’s nomination at the Democratic national convention next month.

Mr Biden made the US central bank a key focus on his plan for a “major mobilisation of effort and resources” to help “advance racial equity across the American economy”, his campaign said on Tuesday.

In particular, it said that Mr Biden would work with Congress to amend the Federal Reserve act to force the central bank to “aggressively enhance its surveillance and targeting” of “persistent” racial inequalities.

The proposal would “require the Fed to regularly report on current data and trends in racial economic gaps — and what actions the Fed is taking through its monetary and regulatory policies to close these gaps”, the Biden campaign said.

In addition, the Fed should implement a “real-time payment” system allowing cheques to clear more rapidly, which would be most advantageous for low-income households, and “revise its hiring and employment practices” to make the US central bank more diverse “at all levels”, the Biden campaign said.

The plan stops short of calling for the Fed to directly target the unemployment rates of black and Hispanic communities, instead of the US average, in its policies — a measure that has been backed by some economists, including Jared Bernstein, one of Mr Biden’s economic advisers while he served as Barack Obama’s vice-president.

Many Fed officials, including Mr Powell, have reacted to the BLM protests in recent weeks by insisting that the US central bank was attuned to concerns about the racial economic divide, and saying its easy monetary policies would directly benefit low-income communities. 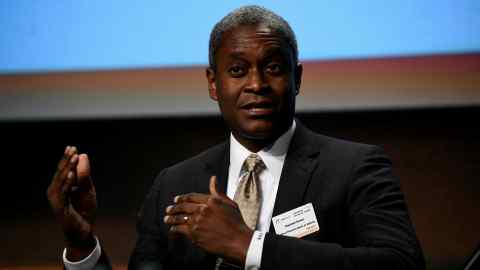 But Fed officials have been cagey about agreeing not to raise rates until the black unemployment rate fell to a certain level.

Mr Biden’s plan includes a $30bn fund to help minority entrepreneurs, an increase in the federal minimum wage to $15 per hour and a series of measures to eliminate discrimination in lending, including in the housing sector.

While Mr Biden has a comfortable lead over Mr Trump in national polls and in many swing states with just over three months before the election, he will still need to ensure that black and Hispanic supporters turn out to vote in November to bolster his chances of victory.