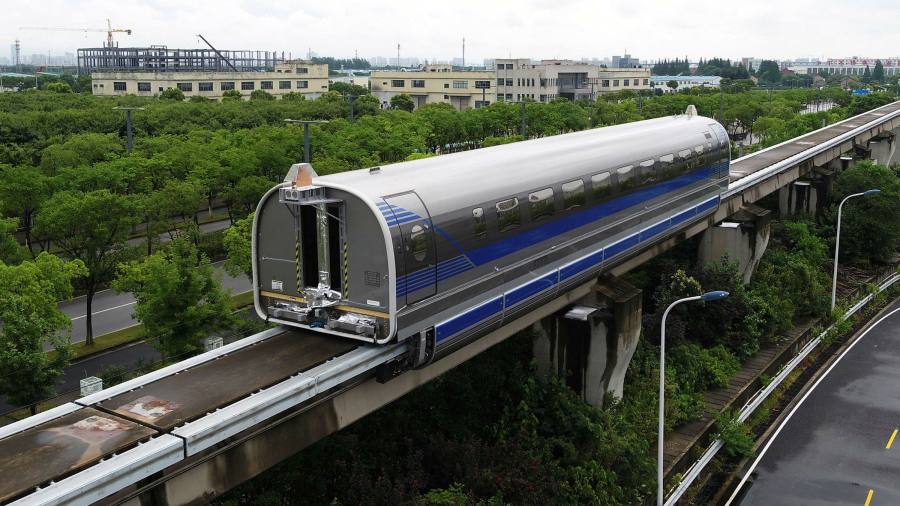 It is meant to be the fastest, most sophisticated railway ever built, whisking passengers from Tokyo to Osaka in just 67 minutes. But the world’s first magnetic levitation mainline has one big problem: a 9km gap in the middle.

Although construction on the $84bn maglev project began in 2014, the governor of Shizuoka prefecture is refusing to allow work on one short stretch — entirely in a tunnel — that will pass beneath the mountains of Japan’s southern Alps.

With the dispute now threatening to delay the entire project at a cost of billions of yen to the JR Central railway, the company’s chief executive Shin Kaneko begged governor Heita Kawakatsu to let work begin at an unusual summit on Friday that was streamed live to the public.

“It takes time to build such a long tunnel. This is almost the last minute,” said Mr Kaneko, explaining that it would take five years to dig the tunnel and another two to lay the tracks and run tests before the first stage from Tokyo to Nagoya is due to open in 2027. “We need to find some way to keep the work going.”

But Mr Kawakatsu gave little sign he will relent, saying the tunnel will divert water out of Shizuoka’s rivers, risking long delays to a prestigious national project backed with trillions of yen in public money by prime minister Shinzo Abe.

“Of course we are not against the maglev project itself,” said Mr Kawakatsu, who served Mr Kaneko with a cup of Shizuoka green tea made from the water he said would be lost. “But the towns in the watershed, the people of Shizuoka and everybody in Japan who relies on well water are thinking the same thing, which is what happens if the water is diverted.”

The result of decades of research, Japan’s maglev uses electrical current to generate a magnetic field, lifting the train by about 10cm and propelling it forward. Eliminating moving parts and friction allows the train to achieve record speeds. The technology has been used for Shanghai’s airport railway but never for an intercity route.

The Shizuoka stretch is part of the 25km Minami Alps tunnel, the deepest built in Japan, with 1,400 metres of mountain above it. The tunnel will start in neighbouring Yamanashi prefecture and go all the way through the mountain range to Nagano prefecture.

Because the tunnel slopes downwards to both exits, Shizuoka prefecture fears it will drain groundwater that would otherwise enter the Oi river. “We want them to pump the water back,” said Yasuhiro Oribe, director of environmental protection in the prefectural government.

JR Central insists it is taking the water problem seriously and will follow the advice of an expert panel convened by the national government, but commentators say it has underestimated the prefecture’s concerns.

“The biggest problem is that this railway has no benefit for Shizuoka prefecture. For them, it’s a risk without a return,” said Naoki Osaka, a reporter for Toyo Keizai magazine who has been following the dispute.

Whereas every other prefecture on the route will get a station, connecting it to Tokyo and Osaka in minutes, Shizuoka will get nothing. What is more, the new maglev — known as the Chuo or Central Line — will bypass the existing Tokaido high-speed line, which runs along the coast through Shizuoka’s main cities and is also run by JR Central.

Mr Osaka has suggested that what Shizuoka would really like is a new station on the Tokaido line at its prefectural airport. But having pushed so hard on the environmental issue, and with a possible re-election campaign due next year, it would embarrass Mr Kawakatsu to cut a backroom deal.

Since there is no other way to build the maglev, local observers think the prefecture will eventually give the go-ahead, but pressure is on JR Central.

“The 2027 schedule doesn’t have any slack built in; it was extremely tight from the start,” said the company, which is building the project at its own risk, albeit with the help of low-interest government loans. “If this situation continues, then we fear there could be an effect on the opening date.”

Although rating agency Moody’s cut its outlook on JR Central to negative earlier this year, the company insists it will be able to weather any delay. “We are injecting the cash flows from the Tokaido into the construction of the Chuo line, so to the extent that overall construction costs do not rise, then any delay would not put pressure on our business,” it said.