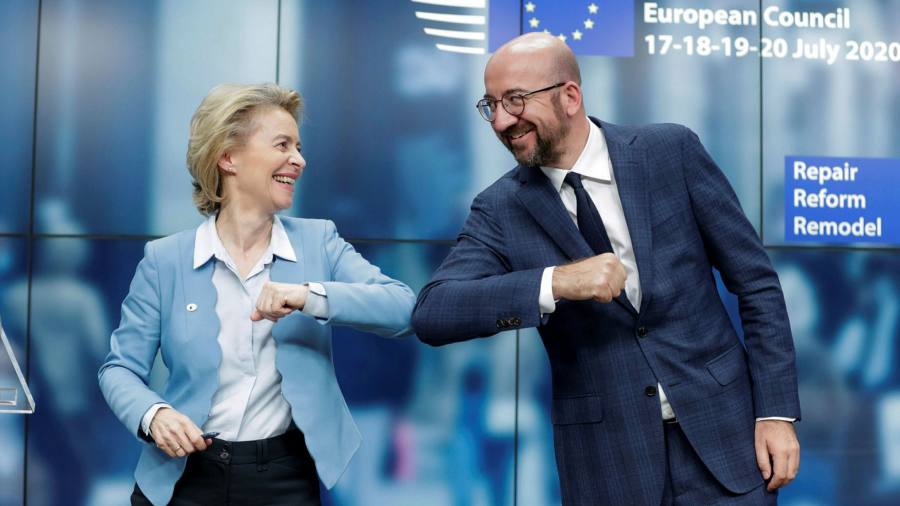 After marathon and often fraught negotiations, the bloc’s leaders reached a momentous deal for a €750bn recovery fund, to help cushion the effects of a coronavirus-induced economic slump, as well as a new seven-year year budget worth €1.074tn.

For the first time, the EU’s 27 leaders have agreed, in effect, to establish a federal deficit as an instrument of macroeconomic crisis management. Brussels will borrow money on the debt markets and distribute it in large part as grants to hard-hit countries to help finance their reconstruction efforts. It is a historic achievement, although not necessarily a permanent one.

After strong resistance from the Netherlands, Austria, Sweden and Denmark, the €500bn in grants envisaged by the European Commission — building on a Franco-German plan — were slashed to €390bn. But most of the cutbacks come at the expense of additional spending on programmes for regional development, research into the green transition and funding for the European Investment Bank. So the core facility, which channels recovery grants to damaged member states, will be largely preserved.

The recovery fund will remove some of the pressure on the European Central Bank, which has shouldered most of the macroeconomic effort in the eurozone. Even before the EU funds start to flow, it will also encourage indebted southern members to do more to cushion their businesses and workers from economic fallout, reducing the gap with Germany’s vast support programme,

But the agreement is far from perfect. It may channel too much money to poorer states even if they have not been as badly affected by the crisis as others. A link between aid payments and respect for the rule of law is still to be defined. There is also a mechanism to delay cash disbursements to member states that appear to drag their feet on reforms, pending a three-month review by EU leaders. This could be a recipe for endless summit arguments, although it falls well short of the national veto sought by Dutch prime minister Mark Rutte, the frugal four’s ringleader.

The deal was reached at some cost to the EU’s image and unity. The ugliest EU fights are always over money. But this European Council was the most rancorous in many years. It exposed the bloc’s multiple faultlines and deep lack of trust between frugal northerners and needy southerners, and between western paymasters and eastern populists.

The EU’s early response to coronavirus was shaped by an every-nation-for-itself impulse. With the single market, the single currency and social cohesion under immense strain, Brussels and Berlin have worked hard to rekindle a sense of solidarity with Italy, Spain and other countries hit badly by the pandemic and economic shutdown. The bad-tempered horse-trading may undo some of that work.

The more corrosive effect, though, may be in the Netherlands, Austria, Sweden and Denmark, which fought tooth and nail against grants rather than loans, and then demanded impossibly tough controls on how the money would be spent.

They drove down the final amount, mainly by cutting spending on research and action on climate change, which they normally regard as top priorities. They eventually signed up to a deal after securing much bigger rebates than under the last seven-year budget on their annual contributions to the next seven-year budget. Like his frugal counterparts, at home Mr Rutte will try to sell his stance to a sceptical parliament and public. But he risks storing up disaffection if he reduces EU membership to an exercise in bean-counting, as Brexit Britain painfully showed.

Mr Rutte assumed the role of Brussels bogeyman in these talks because Germany, the Netherlands’ traditional ally on budgetary matters, instead backed the majority view that favoured a big fiscal effort. Ms Merkel recognised Germany’s special responsibility to safeguard the union against a potentially existential economic threat to the single market and to the euro. Thanks to her uncharacteristic decisiveness, the EU has moved with a speed and resolve that most people would have thought impossible only a few months ago.

The writer is the FT’s Europe editor