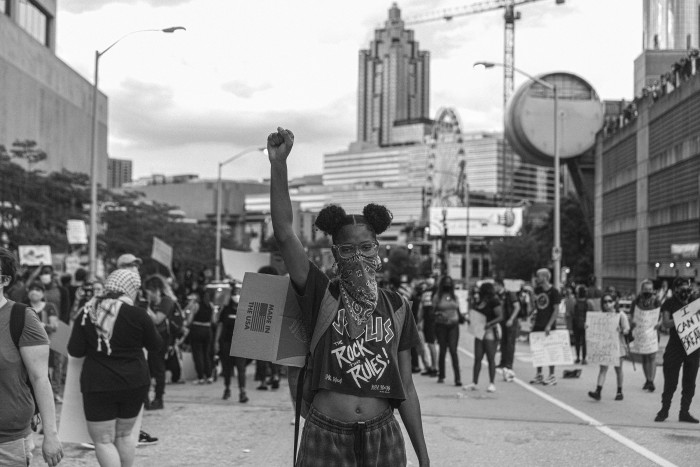 I didn’t think twice when a protest was scheduled in Atlanta after George Floyd was killed. Hearing of his death, along with that of Ahmaud Arbery and Breonna Taylor, and now Tony McDade, caused a bit of rage combined with sadness inside my body, and I wanted to bare those emotions with everyone else.

I’d never been to a protest, nor photographed one, so my act of solidarity came out of necessity and curiosity. Everyone was there with one accord, and it was palpable. Various signs held by protesters were very unapologetic about their messages. The more we tear down the inequities that the United States has inherited, the more we can be honest about the systemic racism present in our country.

I am not OK. The cruelty I witnessed by the police on Fairfax Avenue will stay with me forever. I watched non-black individuals vandalise and loot with zero police presence stopping them. Meanwhile it seemed as though every law-enforcement official in the city was in riot gear, shooting at unarmed, peaceful protesters two blocks away.

It is the unwavering love I have for every black person who has marched, protested and organised – both in the past and the present – that keeps me together. And to every non-black ally that has used their power and privilege to support, protect and uplift their black peers, you have my love as well – keep going, please.

As a black photographer documenting the protests in Washington, DC, after the murder of George Floyd and many others by the police, this has been an awakening moment for everyone. To see the world come together in solidarity for my people on racial issues shows how black lives truly matter.

Though it is hard to be in the midst of the movement, it is needed. I am here to visually show the world that we are fighting for our freedom, our reparations and all injustices placed upon us because of the colour of our skin. As Malcolm X stated: “Concerning non-violence, it is criminal to teach a man not to defend himself when he is the constant victim of brutal attacks.” Black people are standing up and fighting back because we are tired of constantly being bullied.

A woman raises a Black Power fist in support of protesters as they pass through her Washington, DC, neighbourhood © Dee Dwyer

Blacks across the US are fighting this perpetual battle for equality and, frankly, life at its most basic level. Unfortunately, this is nothing new. The death of George Floyd has spurred another wave of rage, sorrow and hopelessness in the city of Minneapolis and across the country. I began documenting protests in 2013 and started a photographic series called After Selma in 2015. Like much of my work with present-day demonstrations, I feel a responsibility to continue documenting our fight against injustice.

Solidarity has been the overall message here in Flatbush, Bed‑Stuy and many other black neighbourhoods in Brooklyn. During these times and being on the ground, I’m seeing more black people stand together, support one another and hold conversations. From making sure outside agitators don’t destroy black businesses to directing traffic and supplying the protesters with water, there have been displays of strong unity.

Brooklyn, May 30. A father and his daughter attend a protest at the Barclays Center © Anthony Geathers

Even on social media, black people are linking up and figuring out ways to help each other, not just through the fire, but for the sake of the future. I see black scholars and leaders, that many in the media criticise, continue to be of service with their knowledge about how to move as a people. I see black teachers and mentors out there, including my brother, continue to educate and encourage the youth to talk about these times – even though they’re having to do so remotely.

When I got to the protest, there were so many people of different ethnicities, religions and beliefs. The crowd was huge, so much bigger than I could have imagined. I immediately felt the energy of people wanting, praying for change – praying that this is the last life taken.

I began to gravitate towards groups where the emotions were spilling over – hearing their stories, capturing their images, making sure I caught them in the best light possible. There was a story that really broke me down the most – a mother who had lost a son to police brutality, with a child in a carriage. The younger son was reaching for one of their protest signs, not quite understanding what he was grasping for as the mother pulled the sign back. The sign said “Not my sons”. In that moment, I realised that everything is at stake right now. The very fabric of what makes us human.