He was one of the world’s most wanted men, who evaded capture for more than 25 years over his alleged role in the Rwandan genocide.

But this week Félicien Kabuga appeared in court after being arrested in a dawn raid on an apartment in a Parisian suburb by French police officers dressed in black combat uniforms.

One of the longest-running manhunts ended with the octogenarian Mr Kabuga in custody. He was indicted in 1997 on seven counts of genocide for his alleged involvement in the killing three years earlier of more than 800,000 mainly ethnic Tutsi Rwandans. But despite a $5m US bounty for his detention, he went on to evade international justice for two decades.

Once one of Rwanda’s richest men, in 1994 Mr Kabuga part-owned Radio-Television Libre des Mille Collines, the broadcaster whose radio transmissions, prosecutors allege, co-ordinated the government-backed Hutu killing squads attacking the minority Tutsi population during 100 bloody days. Mr Kabuga allegedly personally called for the extermination of ethnic Tutsis during meetings in the months before the genocide and also helped to finance the killing, according to the charges against him.

“I saw him often in the mornings, walking in small, shuffling steps. He often wore a hat, and gloves,” said Sebastian Tran, a neighbour who lived close to the third-floor apartment where the now frail Mr Kabuga was apprehended last weekend. “There was usually someone following about five feet behind. I always thought it was his son.” 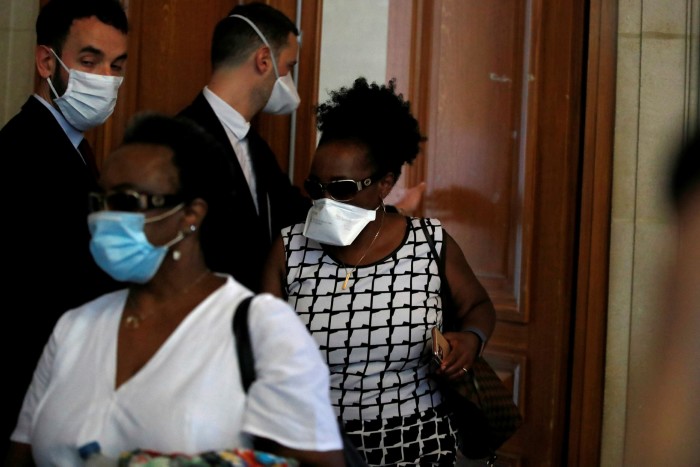 The UN’s International Residual Mechanism for Criminal Tribunals, which took control of the case in 2015 when the court established to try Rwandan genocide crimes was closed down, petitioned on Wednesday to have Mr Kabuga transferred to temporarily to its branch at The Hague.

Law enforcement agencies and prosecution services from nine countries contributed to the arrest, it said. Mr Kabuga’s lawyer, who this week told French media that his client was innocent until proven guilty, did not respond to a request for comment.

Colonel Eric Emeraux, head of the French police unit that deals with genocide and war crimes, said the first tip-off suggesting Mr Kabuga was either in Belgium or France came from UK police at a meeting with authorities from those countries at the start of the year.

For us, among the most wanted people on the planet you had two. You had [Osama] Bin Laden, who is now dead . . . And then there was Félicien Kabuga, who was number two.

British officers had noticed that one of Mr Kabuga’s adult children travelled regularly from the UK to France and Belgium. Using mobile phone data, the French authorities tracked the person’s regular visits to the Asnières-sur-Seine suburb where Mr Kabuga was later found. Other family members were also identified frequenting the area. After France’s coronavirus lockdown was introduced, one of them continued to visit the apartment that was eventually raided.

“Operations are like that. You pull on one thread and it keeps getting longer. The more you pull the more you find there is something interesting at the end,” Col Emeraux said.

The French police confirmed Mr Kabuga’s identity following the arrest using a DNA sample collected when he had evaded capture in Germany in 2007 after receiving medical care, Col Emeraux said. The authorities could not yet confirm when Mr Kabuga had entered France.

“For us, among the most wanted people on the planet you had two,” the police colonel added. “You had [Osama] Bin Laden, who is now dead . . . And then there was Félicien Kabuga, who was number two.”

Still his sudden arrest, after many Rwandans had given up hope of justice, has also raised questions about how he evaded the authorities for so many years, particularly living in one of Europe’s biggest cities.

“I wonder how he can have been in France for this long without being detected,” said Kayumba Nyamwasa, a Tutsi former Rwandan spy chief turned opposition leader, who now lives in exile in South Africa. Mr Nyamwasa served as chief of staff in the Rwandan army after the genocide and then ambassador to India, before breaking with President Paul Kagame in 2010.

Mr Nyamwasa said that after the genocide Mr Kabuga had fled to Kenya, where several efforts were made to secure his arrest. In one attempt an FBI informant reportedly set up a sting operation, but when officers arrived to make the arrest Mr Kabuga was not there and the informant was dead.

Mr Nyamwasa also noted that the arrest had come after a period of “rapprochement” between Kigali and Paris. Since 1994, Rwanda has repeatedly questioned France’s own role in the genocide.

France was a close ally of the Hutu-led government of president Juvenal Habyarimana prior to 1994. Rwanda has accused UN-backed French troops in the country of allowing soldiers and officers responsible for the genocide to escape during a humanitarian mission to protect civilians.

Under President Emmanuel Macron, who has sought to strengthen France’s position in Africa, relations with Kigali have improved. In 2018, Louise Mushikiwabo, the former Rwandan foreign minister, was appointed to head the influential association of French-speaking countries, the International Organisation of La Francophonie, with the full backing of the Elysée Palace. And last April, Mr Macron opened a full investigation into France’s role in the genocide.

Three months later the operation to find Mr Kabuga was relaunched, Col Emeraux said. The Elysée declined to comment and the Rwandan presidency did not respond to a request for comment.

“There is an ambiguous history between France and the Rwandan genocide and its pursuit of those involved,” said William Bourdon, a Paris-based lawyer and human rights specialist.

“What’s sure is that there is a history of complicity between France and Rwanda . . . but now the wind has changed,” he added. “It has changed late but it has changed.”

This story has been corrected to state that the UN’s International Residual Mechanism for Criminal Tribunals has asked for Mr Kabuga to be to transferred to its branch at The Hague, not to the International Criminal Court at The Hague