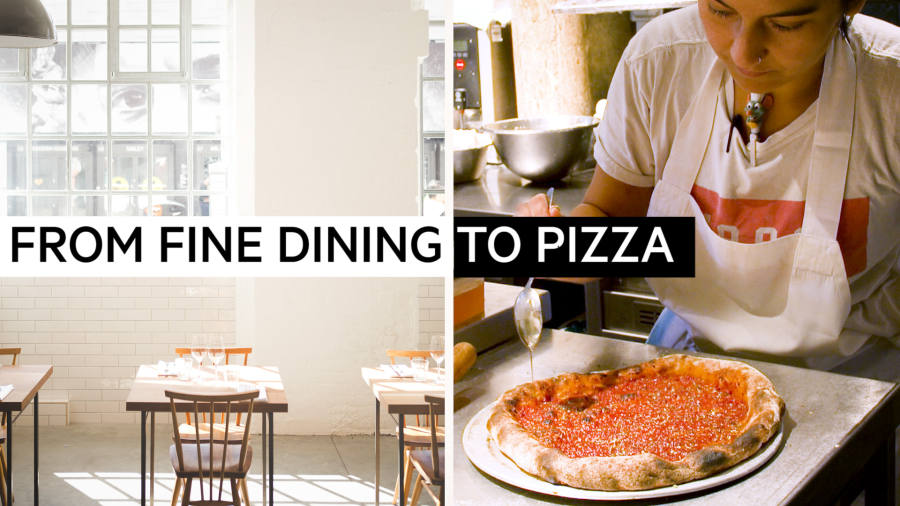 You can enable subtitles (captions) in the video player

After months in lockdown, restaurants are back.

But they’re coming out of hibernation and into a strange new world shaped by the coronavirus pandemic.

I’m Daniel Garrahan. I’m a journalist at the “Financial Times” and I love eating out. We want to see how the restaurant business is adapting as we come out of lockdown and what eating out will look like in the future.

Our first stop is Lyle’s, a Michelin star restaurant in London’s Shoreditch. How could a fine dining restaurant like this survive?

Tim, good to see you.

And you, mate. Even at a distance.

At a social distance.

The UK is unlocking. Restaurants are starting to reopen. It’s a exciting time. It’s a challenging time for restaurants too, isn’t it?

Oh, you’re not kidding, and no more so than here. It’s the cutting edge of the restaurant phenomenon in the UK, what we’ve seen over the last couple of decades, and yet it’s right here on the street that marks the edge of the City and hipster central. I’m looking over there and it’s empty. There’s nothing moving in the City, and I don’t know what’s happening in hipster central because nobody’s been in there in three months.

Huge challenges ahead for all different types of restaurant businesses, but then there’s the dining experience as well. I’m desperate to get out there and eat. Haven’t been out to eat in a restaurant for several months, like most of the people in the country. And yet, at the same time, feeling a bit cautious. What is this new experience going to look like? Are we going to be safe? Is it going to be an enjoyable experience?

Well, I’m going to be really interested to see what you think as a punter because the way they make those guidelines sit, it’s going to be the difference between whether you’re desperate to go, or you’re going to go once, and you’re going to go, sod it! I don’t even like eating out anymore.

Yeah, a romantic candlelit dinner for two served by a waiter always just wearing protective clothing and a visor, is that going to be an enjoyable or romantic experience, who knows?

And here’s your wine, and can I give you a bed bath? It’s got that sort of… I don’t know. It has got a hospital vibe to it. How are we going to deal with that?

If these guys can’t crack it, nobody can.

Should we go in there and see what they’re up to? Lyle’s was co-founded by general maager, John, and head chef James.

Yeah, in a state of flux, this is Lyle’s.

They also run Flor, a bakery and coffee shop across the city in Borough Market.

Last couple of weeks was pretty brutal. And at that point, not having any sort of support in place and just not really knowing anything.

You’re the first Michelin guys I’ve had the opportunity to ask, what do you think’s going to happen to Michelin after this? Are they going to go and reassess everybody as we come out of it?

They’re kind of panicking that they won’t be able to sell their next… their next guide because it’s essentially the same as one from the previous year.

Because nobody will want to say anything negative about a restaurant forever. And…

Come review us then. What a great time to.

We’ll invite them all back.

With its Michelin star and a place in the annual world’s 50 best restaurants rankings, Lyle’s attracts international food tourists in normal times, but for now, it remains closed.

You haven’t been open for the big reopening weekends, but I mean, is that a decision you’re going to take anytime soon?

I think there is a little bit of, let’s see what happens because I certainly think that people will give an outdoor seating more of a shot than they will do being inside a restaurant. I remember when we opened and every single person in the restaurant industry came in and just said, uh, you can get way more, way more seats in here. We put our cap on how many people we thought we could do reasonably.

How many was that?

So how many covers would you have? Anything…

So it’s a reduction, but it’s not too drastic?

Is it going to be worth reopening for you? Do you think?

I’m not entirely convinced or I just don’t know yet how I feel about how people are going to react to going out to a restaurant.

There’s still a concern about eating in or eating out, and I think it’s hugely divisive at the moment. You get half the people going, you know, you… I can’t believe you’re open. That is inhumane. What are you doing? You’re killing everyone. So the other half go, you’ve got to get out there and support these people.

I’m hearing a lot from operators, finance people, largely, who are running restaurant groups, and chains, and pubs, and virtual drinking places, and they want people to go back. And I hear a lot from chefs who are all about their creative expression and their brand and how that fits. I’m hearing a deadly silence from waiters, and waitresses, sommeliers. How are they feeling right now? This must be really scary for them.

They’re petrified. The pressure and responsibility I felt most is people looking at me and James for answers, and me and James going, I don’t know.

Kitchen is looking a little bit different at the moment. We collect all of our production from restaurant food to our pastries, viennoiserie, which is what we do at our other restaurant, Flor, down at Borough Market. It’s a useful time to give people a bit of training in something different to justify paying, to give them some money.

And you weren’t ever tempted to keep the kitchen open to do delivery or DIY kits in the way that some other restaurants are?

One of the things that really makes the food here stand out is balance and timing. Things are taken from your product and served in a very short space of time, and that does not work.

What do you think it’s going to look like in this restaurant when you are serving again indoors?

A bit odd. The tables are further apart.

Yes, potentially. I mean, but people show up. We’ve been criticised for that for a long time anyway. So I don’t really…

Yeah, I don’t really mind. Yeah, exactly, it’s like, here we are. It’s as it always was.

100 per cent support anyone that’s opened.

To not open when you’ve been told you can open with the current financial situation is a hard decision to make. To plan long term at the moment is a pointless exercise. You just have to react to what is happening, to try and keep things going.

I was going to ask for a nice clean prediction and it actually is kind of heartening that there isn’t one for this place. It’s going to be good. You’re going to do the right thing, but you’re not going to be rushed into committing to something very specific.

The only thing I will sit here and say about anything that James and I will do is it will be good. What any of those things are?

It turns out that Shoreditch has been a ghost town ever since the UK went into lockdown. So John and James pivoted to pizza, converting Flor into an open hatch delivery and takeaway. It’s kept them afloat and it means they don’t have to rush to reopen Lyle’s.

It seems a logical extension of the brand. I really want to know what these guys will do with the pizza.

We’re using the same suppliers, the same grain, the same mills. Our pizza dough is a 36-hour sourdough fermented pizza dough. So on a Sunday, in our first week when we didn’t really know what we’re doing, by 7 o’clock, we had sold out.

So this is Flor and it doesn’t look like it’s opening up again as a restaurant space anytime soon.

JOHN OGIER: No. I think with the restrictions at the moment, there’s not really the opportunity here. It’s not really viable. I think downstairs in our bar, we can’t have anyone. And even at a meeting you have 12 people.

With Flor closed for indoor dining, Flor’s landlord, Borough Market, agreed to provide some outside dining space for the new pizza operation.

A tenant or a landlord can bury their head at the moment or you can have a discussion about how you can make things work. Businesses going under is not going to pay the rent in three months or six months’ time. The people who aren’t prepared to explore and look at other avenues of revenue and layering a business are the businesses that potentially are going to struggle.

It has always been that question like you get as a chef, oh, what’s your guilty, guilty pleasure of what are you eating? And I’ve always said, I don’t really know. I don’t think I have one. And then they find out I love pizzas, like, that’s your guilty pleasure. It’s like, no, but pizzas are awesome. There’s nothing – there’s nothing bad about – nothing bad about loving pizza. Pizza’s amazing.

Well, that does look superb, doesn’t it? Look at that.

What is that? Is it cheese and ‘ndjua, isn’t it? That’s a cured pork and chilli product.

It’s not vegetarian, is it?

So what did you think, the whole set-up?

As a diner, I would come here and eat like this happily. This is what I’ve been yearning to do. This doesn’t frighten me and it feels quite safe. And I think what they’ve done is quite clever because they’ve used the resources they have.

But you also see what it’s like on the other side. How they’re having to shift to keep their brand protected, their people protected, their suppliers paid, their bills paid, there’s landlords involved in the process. God knows what it must be like for a small operator. So I’m really glad we got to see how tough, even for the big boys, you know, the proper name places. It is hard as hell.

It’s a hit to the ego as well. You think, so you’re talking about Michelin star chef who is used to cooking the most refined food being forced by Covid-19 to having to make a pizza.

I think, honestly, is they really rather enjoy it. They don’t admit it, but I think they love slinging out pizza.

Well, it certainly shows, doesn’t it? Well, sorry, you wouldn’t know, would you?

It’s as good as it looks. It smells…

No, it’s much better than that.