Hong Kong’s emergence as a battleground in US-China tensions has prompted fresh concerns over the city’s future as a global financial hub — and the fate of its currency.

Washington’s decision to strip the territory of its special trading privileges, in retaliation for China’s controversial new security law, has raised fears in some quarters that Hong Kong’s currency peg with the dollar could be abandoned.

That would, according to UK foreign secretary Dominic Raab on Tuesday, threaten “what has long been the jewel in [China’s] economic crown”.

But many mainstream observers expect the currency’s decades-old link to the greenback — which has a history of repelling speculators — to ride out the current turbulence, pointing to its crucial role in Hong Kong’s position at the nexus of Chinese and international finance.

The view that a decoupling from the dollar is imminent has gained traction at some investment banks. Sebastien Galy, a senior macro strategist at Nordea Investment Funds, believes that the Hong Kong dollar will be re-pegged to China’s currency within the next four to eight weeks. “The right strategic response is to . . . replace it with the renminbi,” said Mr Galy, noting that such a move would minimise Chinese companies’ exposure to the US-controlled dollar system.

Already, Hong Kong’s political tumult has resulted in a rush for US dollars at money changers. An employee at Hing Yip Exchange, near the central business district, said that in the past week it had sold out of US dollars as residents offloaded the local currency. 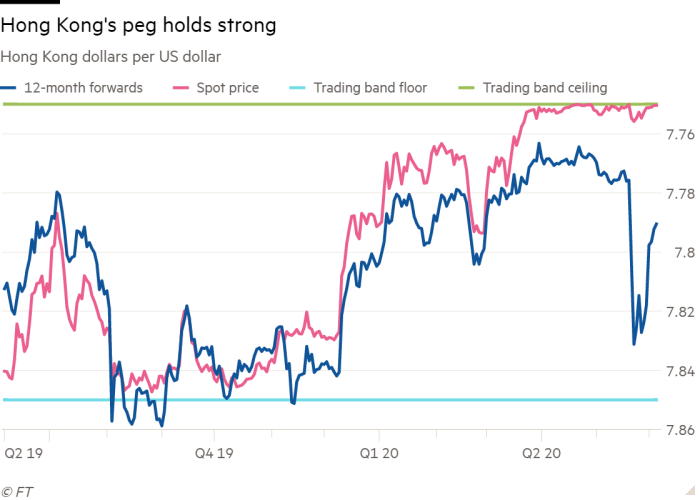 Against a backdrop of nervy investors and residents, Paul Chan, Hong Kong’s financial secretary, this week denied there were any plans to ditch the peg. The loss of the city’s special trading status with the US would “not affect Hong Kong’s position [as an] international financial centre”, he insisted.

The Hong Kong Monetary Authority, the city’s de facto central bank, has fended off high-profile bears before. George Soros failed in his bet that the peg would crumble during the late 1990s Asian financial crisis. Kyle Bass, a prominent Dallas-based hedge fund manager, has more recently argued that the arrangement will come to an end.

The current challenges to Hong Kong’s financial system are “unprecedented”, said Kevin Lai, chief economist for Asia ex-Japan at Daiwa Securities. The city’s economy is also mired in a recession following months of anti-government protests and the coronavirus outbreak.

Any strain is yet to manifest in trading of Hong Kong’s currency, which is permitted to move in a band of HK$7.75 to HK$7.85 per US dollar. The Hong Kong dollar has been stapled to the strong end of that band for more than two months.

Mr Lai said the Hong Kong dollar’s recent strength was a sign that the peg was working as intended. Tight liquidity in Hong Kong’s banking system has kept local interest rates about 1 percentage point higher than those in the US since the Federal Reserve cut rates to near zero in March. That gives traders an incentive to hold the Hong Kong currency.

Hong Kong’s dollar was pegged to its US counterpart in 1983 to stop the currency’s free fall as London and Beijing thrashed out the then British colony’s return to China.

That means the HKMA follows US central bank policy and is mandated to buy the local currency using its dollar reserves if capital outflows push the exchange rate to the weaker end of its trading band. That leaves the city’s banks with fewer funds for short-term lending, driving up interest rates and making it more attractive for investors to hold Hong Kong dollar assets. The process happens in reverse if the currency gets too strong.

But Alicia Garcia Herrero, chief Asia-Pacific economist at Natixis, said recent Hong Kong dollar strength was itself an issue, as it was driven by high interest rates at a time when the economy was in the doldrums.

That raises the question of whether the peg was still worth the trouble. If the US ends up applying sanctions on Hong Kong over the national security law issue, she added, that would “only accelerate that drain on liquidity”.

Many analysts point out that this system has served Hong Kong, mainland China and global investors well over the past few decades — making it unlikely to disappear. The city is an important hub for Chinese companies looking to raise capital in dollars, points out Michelle Lam, Greater China economist at Société Générale.

JD and NetEase are among the companies that have announced plans to raise billions of dollars on Hong Kong’s stock market as Washington lawmakers push for legislation to evict Chinese companies from US capital markets. Eliminating the peg could severely diminish China’s premier offshore funding platform as hostility from the US grows.