Hong Kong police have arrested four students for forming a group to advocate for independence for the territory in the first such arrests under the city’s sweeping new national security law.

The arrests came as authorities in the city moved swiftly to crush dissent under the law, which was introduced this month, with Hong Kong universities purging two activist academics.

There was also speculation that the government would postpone September’s election for the city’s legislature after it was predicted that the pro-democracy movement would win a large share of the seats.

Hong Kong police did not name the detained students, saying only that they had arrested three males and a female aged 16 to 21 years old for organising a pro-independence group.

It marks the end of academic freedom in Hong Kong

But the social media accounts of Studentlocalism, a Hong Kong pro-independence student group, said Tony Chung, one of its former leaders, was among the four arrested. The group’s US branch has been advocating for Hong Kong’s breakaway from the mainland in Facebook posts.

The suspects were held in “connection with the publishing of content about secession and inciting or abetting others for the commission of secession on online social media platforms in July this year”, the police said.

Under Hong Kong’s tough new security law, crimes ranging from secession, subversion, terrorism and collusion with foreign elements are punishable with up to life imprisonment.

Critics say the legislation’s wording is vague and violates the political, civil and legal freedoms guaranteed to the territory on its handover from the UK to China in 1997.

Pro-Beijing advocates counter it was needed to end a wave of sometimes violent pro-democracy protests in Hong Kong over the past year. They said the law would not be applied harshly as its main aim was deterrence.

But the arrests of the four youths based on their alleged online activism is expected to raise fears among the city’s civil and political groups that the authorities are planning a wider crackdown.

Studentlocalism last month said it was ceasing all of its activities in the territory but has set up overseas branches to continue its campaign for Hong Kong independence.

The group’s American branch posted a statement on social media last week saying it would lobby the US to “push forward and pass motions that support Hong Kong independence”.

Since the introduction of the security law, professionals working in education, the media and civil society groups said they are facing increasing pressure to avoid expressing sympathy for anti-government protesters. 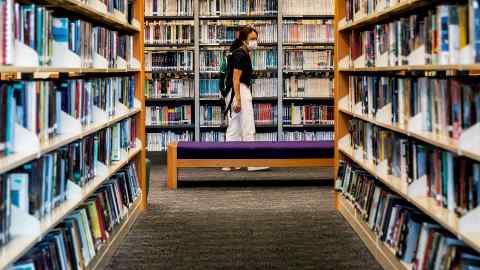 Benny Tai, an activist and associate law professor at the University of Hong Kong, was fired on Tuesday for his role in the city’s first large pro-democracy protests, the 2014 occupy movement.

“It marks the end of academic freedom in Hong Kong,” Mr Tai said. The university said it followed “impartial due process” in making the decision.

This week, Shiu Ka-chun, a lawmaker and lecturer at Hong Kong’s Baptist University who was also involved in anti-government protests, was told by the institution his contract would not be renewed.

According two people familiar with the matter, the government is also considering plans to postpone elections for the city’s de facto parliament, the Legislative Council, for a year owing to a worsening Covid-19 outbreak.

However, some critics said the decision was politically motivated. The election landscape was unfavourable to the pro-Beijing camp after a landslide victory by the opposition in last November’s local election.

Studentlocalism is not the only Hong Kong pro-independence group to have restarted its activities overseas. Other former Studentlocalism members who are now living overseas are said to have started the Initiative Independence Party, another organisation advocating for Hong Kong’s separation from mainland China.