Some of the world’s largest hedge funds are raising their bets on gold, forecasting that central banks’ unprecedented responses to the coronavirus crisis will lead to devaluations of major currencies.

Paul Singer’s Elliott Management, Andrew Law’s Caxton Associates and Danny Yong’s Dymon Asia Capital are all bullish on the yellow metal, which has risen about 12 per cent this year. They are wagering that moves to loosen monetary policy and even directly finance government spending, intended to limit the economic damage from the virus, will debase fiat currencies and provide a further boost to gold.

“Gold is a hedge against unfettered fiat currency printing,” said Mr Yong, founding partner at Dymon Asia, which is up 36 per cent this year, helped by its bet on the gold price.

New York-based Elliott, which manages about $40bn in assets, told its investors last month that gold was “one of the most undervalued” assets available and that its fair value was “multiples of its current price”.

In a letter, Elliott cited the “fanatical debasement of money by all of the world’s central banks” as well as low interest rates and disruption to mining caused by coronavirus. Profits from gold positions helped the hedge fund to a gain of about 2 per cent in the first quarter. 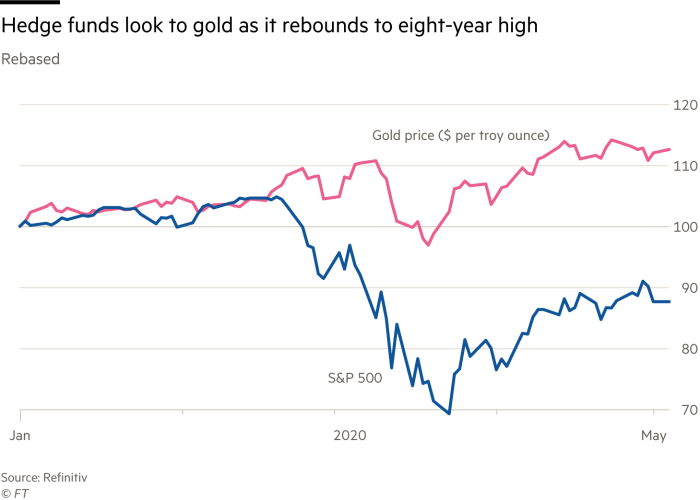 London-based Caxton, one of the world’s oldest macro hedge funds, has also profited from gold bets held through futures and so-called “exchange for physical” contracts, which allow for a switch into bars. Its Global fund is up 15 per cent so far this year while its Macro fund has gained nearly 17 per cent, according to an investor.

Gold has long been seen as a hedge against inflation and a haven in times of stress. But it surprised many analysts in the coronavirus sell-off by falling alongside equity markets as investors opted for the safety of cash. Gold dropped from nearly $1,680 on March 9 to just above $1,450 on March 16, shortly before the S&P 500 hit a more than three-year low.

However, it has since rebounded to an eight-year high of $1,747 a troy ounce on April 14, and was trading around $1,700 on Monday. The price has been supported by a seven-fold rise in purchases of gold-backed exchange traded funds in the first quarter, according to the World Gold Council. This took ETFs’ total stash to a record 3,185 tonnes in March.

Gold was a stellar investment for some hedge funds after the financial crisis. John Paulson’s Paulson & Co, known for its bets against subprime debt before the financial crisis, made billions as the metal rocketed towards an all-time high above $1,900 in 2011.

However, gold has also often been frustrating to trade. The prediction that drove the post-crisis rally — that quantitative easing would lead to high inflation — did not play out, and gold tumbled to below $1,100 by late 2015. Bears can also point to the two-decade slump that followed a high in 1980.

Funds are again betting that stimulus will weaken currencies, even if this does not show up in higher consumer price inflation.

Last month Adrian Orr, governor of the Reserve Bank of New Zealand, said he was “open-minded” about buying debt directly from the government, a prospect that Dymon’s Mr Yong described as “appalling”. The Bank of England has already agreed temporarily to finance the Treasury’s extra spending needs.

“I suspect we will begin to see central banks begin to doubt each other’s creditworthiness and demand gold as payment instead of dollars or yen or euro or any other paper currency,” wrote Jerry Haworth, chief executive of hedge fund 36 South Capital Advisors, in a letter to clients. He calls gold “the credit default swap of central banks”.

Others see opportunities in gold-related stocks. David Neuhauser, managing director of Northbrook, Illinois-based Livermore Partners, told the Financial Times he had increased exposure to gold miners this year in anticipation of inflation or stagflation (when price rises are accompanied by slow economic growth). “Either way it will be good for the metals.”

Not everyone is convinced. Some market-watchers point to weak retail demand for gold in India and China, while central banks such as Russia have halted purchases this year. That could leave gold exposed if concerns over the global economy were to ease, said analyst Helen Lau at Argonaut Research.

London-based Fulcrum Asset Management has profited from gold this year but has since sold most of its exposure. Chief investment officer Suhail Shaikh said the main driver of the gold price was a drop in inflation-adjusted bond yields, which have little room to fall further, he said.

“When things accelerate sharply in one direction, typically that’s driven by people feeling they’ve missed out and just piling in regardless,” he said.