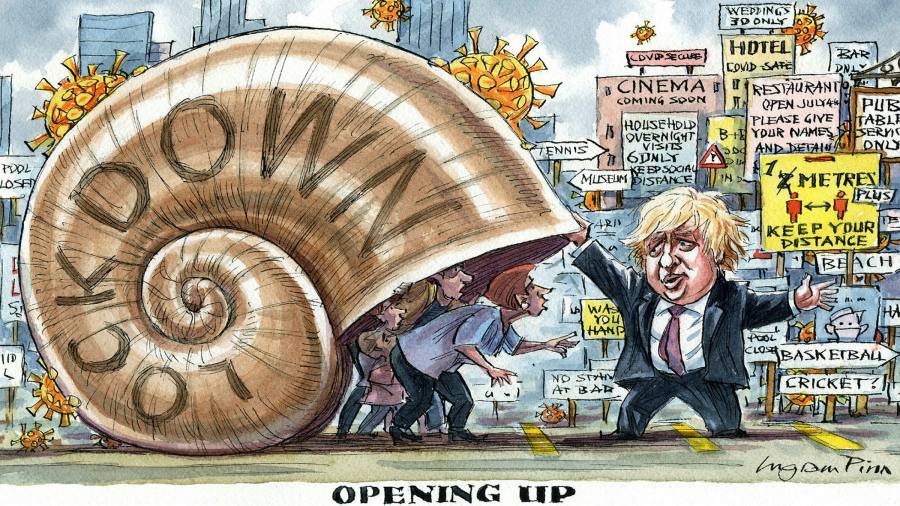 On Thursday, thousands of people descended on Bournemouth beach — a popular spot in the south of the UK. They sunbathed close to each other, picnicked, swam, drank, played and left many tonnes of rubbish behind. Local authorities, panicked by potential Covid-19 spreading, declared themselves “absolutely appalled” at the “irresponsible . . . actions of so many people” — and promptly issued 558 parking tickets.

However, there is another way to look at this and similarly crowded US beaches. Both may be less a disaster-in-waiting and more a sign of the pent-up demand that, in normal life, would make a V-shaped economic recovery likely in the developed world.

Today things are rather different. For months, much of the global population has been locked-down, making normal economic activity logistically impossible. People haven’t avoided buying stuff because they don’t want it. Nor, in most cases, because they can’t afford it.

Most recessions are caused by something that slashes real disposable incomes one way or another, be it via a rise in interest rates, inflation or taxes, or because of a nasty cyclical imbalance that leads to a financial crisis. This recession has not been like that. In most of the west, income replacement during lockdown has been generous: nearly 70 per cent of Americans have got more from state-provided income during the crisis than when they worked (the median replacement rate is 134 per cent, according to a University of Chicago study.) This has created genuine pent-up demand — and recent numbers show that it is now being released.

US car sales were 70 per cent of their pre-Covid levels by mid-May, having collapsed in March. French consumer spending in May was only 7 per cent below normal. In the UK, this week’s long-awaited lockdown loosening saw restaurant reservations and hotel bookings soar. In Germany, most June data suggested that “economic and social activity has started to pick up significantly”, according to ING. “Optimism is back.” Time spent on public transport is rising. Air pollution has returned to near pre-Covid levels in Europe as drivers take to the road: UK motor vehicle journeys rose to 77 per cent of pre-Covid levels this week. Apple’s mobility data backs up the feeling we are on the move again.

It’s tempting, given today’s bias to misery, to assume that this is just a temporary blip that will burn itself out as trade tensions and unemployment rise, and new lockdowns loom amid a second wave of virus hell. But that is not a given.

First, fiscal and monetary support has been stunning. We are in a whole new world of state support of what were once capitalist economies. Morgan Stanley notes that the central banks of the G4 countries — US, Japan, Europe and the UK — will collectively expand their balance sheets by 28 per cent of gross domestic over this cycle. The equivalent number during the 2008 financial crisis was 7 per cent. Fiscal deficits are soaring too: across the G4 and China, the bank says, they will hit 17 per cent of GDP in 2020.

The key point is where the cash is going. In 2008, it went mostly to the financial sector. Today, it is flowing to non-financial corporates and households. In much of Europe, this will continue for some time: many governments have extended support measures to the end of the year.

Economies are also kicking off with relatively healthy financial systems. There is no reason to expect deleveraging or bad loan losses anything like those of 2008 (particularly given the state support). Good firms have also used the crisis to get better. Lockdown might even trigger the wave of digitalisation and productivity gains that we’ve all been waiting for.

Finally, new nationwide lockdowns are unlikely. Yes, Covid-19 cases are ticking up in the US. But globally most leaders are clear they do not intend to lockdown again. Why would they, given that it costs up to 3 per cent of GDP a month, as UBS puts it?

“We won’t be closing the country again”, said US president Donald Trump this week. “We won’t have to do that.” He’s probably right. Better to shield the vulnerable and let everyone else out. It’s a choice that populations are making anyway: the average age of the newly infected in the US is “significantly younger than . . . in the original outbreak in the north-east,” says Gavekal Research.

There are many models that predict a miserable future. The IMF has just knocked another 1.9 per cent off its GDP forecasts for 2020. But if there is one thing we have learnt in recent months it is that models contain no certainty, just suggestions of a range of possible outcomes. Moreover, these outcomes can be derailed instantly if, say, people suddenly decide they are not too scared to re-engage socially.

Morgan Stanley, which has a positive model on the go, reckons that economic output globally will return to pre-Covid levels by the end of the year. Bournemouth suggests it has a good chance of being right.

The writer is editor-in-chief of MoneyWeek