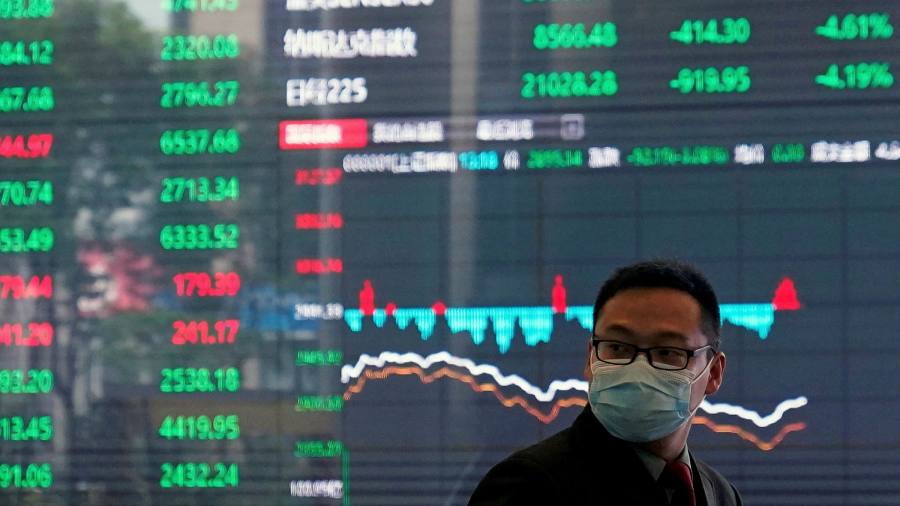 Global stocks rebounded from a sharp dip after President Donald Trump rebutted comments by his trade adviser that suggested the US could tear up its preliminary deal with China.

In volatile Asia-Pacific trading, Tokyo’s Topix benchmark was up 0.5 per cent late on Tuesday morning while Hong Kong’s Hang Seng index gained 0.4 per cent. Australia’s S&P/ASX 200 rose 0.3 per cent while mainland China’s CSI 300 of Shanghai- and Shenzhen-listed shares was flat.

Markets across the region had skidded earlier in the session after Peter Navarro, Mr Trump’s chief trade adviser, told Fox News that the so-called phase one trade deal between the US and China was “over”.

Mr Navarro faulted Beijing for being slow to alert the global community to coronavirus, which originated in the central Chinese city of Wuhan late last year.

But Washington was quick to retract the comments. Mr Trump tweeted shortly after Mr Navarro’s interview that the trade agreement with China was “fully intact”. In a statement, Mr Navarro said he had “been taken wildly out of context” when talking to Fox News.

The prospect of increased tension between the world’s top two economies at one juncture prompted S&P 500 stock futures to point to losses of 1.3 per cent when trading begins in New York later on Tuesday. Following Mr Trump’s tweet, futures suggested a gain of 0.1 per cent. London’s FTSE 100 was tipped to rise 0.5 per cent.

US-China friction has returned to the fore in recent weeks after Beijing moved to impose a controversial security law on Hong Kong, a semi-autonomous territory. Washington responded by saying it would rescind Hong Kong’s special trading privileges with the US.

Overnight, the S&P 500 rose 0.7 per cent as investors bet that governments across the globe would respond to recent increases in coronavirus infections with new economic support measures. The Nasdaq index gained 1.1 per cent to hit a record high.

But investor optimism over the prospect of a global economic recovery from the pandemic has been challenged by a resurgence in Covid-19 cases in the US and China, as well as parts of Europe and the Americas.

The US on Monday reported more than 25,000 new cases for the fifth straight day, with Arizona, California, Florida, Georgia and Texas among the hotspots. Investors have also had to contend with a spike in infections in Germany.

However, Larry Kudlow, the White House’s top economic adviser, insisted on Monday that the US would not suffer a “second wave” of the pandemic, and dismissed rising case counts as “just hotspots”.

Oil prices, which have risen in recent weeks as economies ease lockdown measures, edged lower. West Texas Intermediate, the US marker, dropped 0.3 per cent to $40.62 a barrel while Brent, the international benchmark, was flat at $43.08 a barrel.

The yield on US 10-year Treasuries, viewed by investors as a haven during times of uncertainty, was little changed at 0.709 per cent.