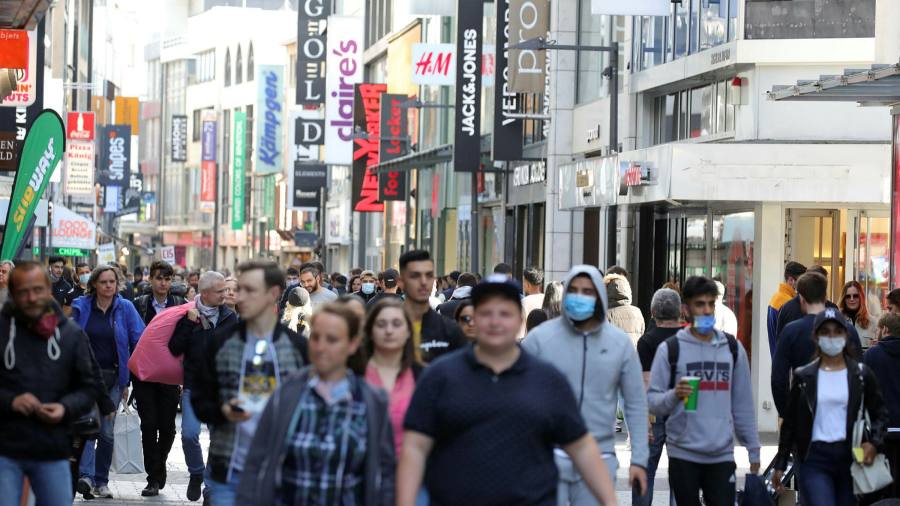 German consumers rushed to reopen their wallets after the lifting of coronavirus lockdowns in May, pushing retail sales in the country up by a record 13.9 per cent from the previous month, according to data published on Wednesday.

The monthly jump was the largest since the start of the data series in 1994, the Federal Statistical Agency said, and sales were 3.8 per cent higher than they were in the same month last year, suggesting that the lifting of lockdowns released pent-up demand.

The data are the latest evidence that the German economy is rebounding from its low point when the pandemic was in full force, despite the fact that social-distancing rules remain in place and many large-scale public events are closed. Some economists said they could revise their estimates for the country’s economy upwards as a result.

“Taking advantage of the early reopening of shops, German consumers opened their wallets like never before in May,” said Holger Schmieding, economist at Berenberg. “The German retail sales data point to an upside risk to our forecast.”

However not all sectors benefited; sales of textiles, clothing, shoes and leather goods were down 22.6 per cent from the same period a year ago, while sales of cosmetic, pharmaceutical and medical products fell 6.3 per cent. Month-on-month figures were unavailable at sector level.

Ralph Solveen, economist at Commerzbank, said that if the trend continued in June, “an unchanged turnover could even be reported for the quarter as a whole . . . This would indicate a smaller decline in GDP in Q2 than most analysts currently expect”. However he cautioned that “retail sales figures are often subject to significant revision”.

France experienced a similar rebound in retail sales in May, its national statistics office said on Tuesday. Consumer spending on goods rose by 36.6 per cent, purchases of cars and leather goods more than trebled month on month and sales of household durables such as furniture more than doubled.

But French household spending on goods remains 7.2 per cent below the pre-pandemic level in February, indicating that the economy still has some way to go before it returns to a normal level of consumer activity.

Germany’s retail figures came as sentiment surveys in Spain and Italy indicated that the manufacturing downturn had eased sharply after pandemic-related restrictions relaxed.

The economic impact of the pandemic is still taking its toll on the German jobs market, according to separate figures published by Destatis on Wednesday, which showed the number of people in employment had fallen by 209,000 to 44.6m in May.

However, the country’s short-term leave scheme, known as Kurzarbeit, has helped avoid much larger-scale job losses; at the height of the crisis more than 11m people had applied to access the scheme.