German businesses are becoming more confident about their outlook for the rest of this year even though their assessment of the current impact of the pandemic has worsened, according to a new survey published on Monday.

The Ifo Institute in Munich said its monthly survey of about 9,000 German companies found that sentiment had “recovered somewhat after a catastrophic few months”. Its main business climate index rose to 79.5 in May — up from a record low of 74.3 in April.

“The gradual easing of the lockdown offers a glimmer of hope,” said Clemens Fuest, president of Ifo. “Nevertheless, many companies are still pessimistic about their business.”

The survey found that German businesses’ assessment of their current situation had worsened, while their expectations for the next six months had improved in all sectors.

Sentiment improved most sharply among companies in Germany’s trade sector — which includes retailers. While these companies were still pessimistic, they were no longer the most gloomy because their outlook recovered faster than the country’s export-focused manufacturing sector. 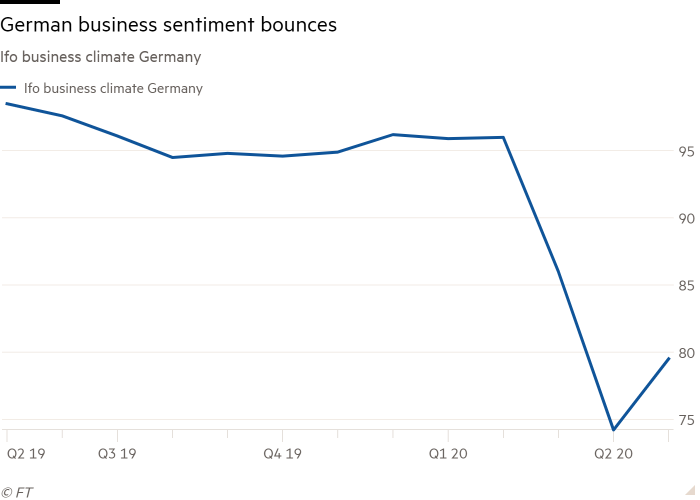 “Industrial companies are still a long way from optimism,” said Mr Fuest. “Their assessment of the current situation was once again markedly worse.” But he added: “The easing of the lockdown is improving sentiment among retailers in particular.”

The outlook of companies in Germany’s domestic-focused services sector “recovered notably from its historic low in April,” said Ifo. The country’s construction companies continued to be the least worried about the outlook, even as their assessment of the current situation worsened.

New orders in the construction industry fell 10.5 per cent in March from the previous month, one of the biggest drops on record, according to data published on Monday.

After the lockdown was partially lifted in recent weeks, German children are returning to schools, many shops and restaurants are reopening, football matches are being played and car companies have restarted production — but all with social-distancing rules still in place.

“Reviving economic activity and returning optimism are highly welcome but are definitely no reason for complacency or even hubris,” said Carsten Brzeski, economist at ING. “Even in a more benign scenario, with more gradual lifting of the lockdown measures and no second wave of the virus, the German economy is unlikely to return to its pre-crisis level before 2022.”

Ifo expects a double-digit decline in the German economy in the second quarter and the government has predicted that gross domestic product will fall 6.3 per cent this year — a record postwar recession.

However, Germany does seem to be recovering faster from the pandemic than many other large European economies, reflecting a quicker lockdown exit and a lower reliance on hard-hit industries, such as tourism.

Germany’s statistics office on Monday confirmed that its GDP fell 2.2 per cent in the first quarter from the preceding three months, compared with 5.8 per cent for France. Output in Europe’s largest economy was supported by resilient government spending and construction activity, offsetting drops in exports, household spending and machinery investment.

“Government support will remain key as restrictions are lifted and the economy starts to recover, with a new stimulus package expected to be agreed on June 2,” said economists at Morgan Stanley.

Economists are tracking real-time economic indicators, such as the volume of heavy goods vehicles on toll roads, electricity use, customers in stores and passengers on public transport. Many of these indicators suggest that activity has been picking up in Germany since the lockdown started to be lifted in late April, although it is still below normal levels.

The Ifo survey confirmed the rebound in German business activity reported last week by the IHS Markit purchasing managers’ index, which recovered from record lows in both the country’s services and manufacturing sectors while remaining well below long-run averages.