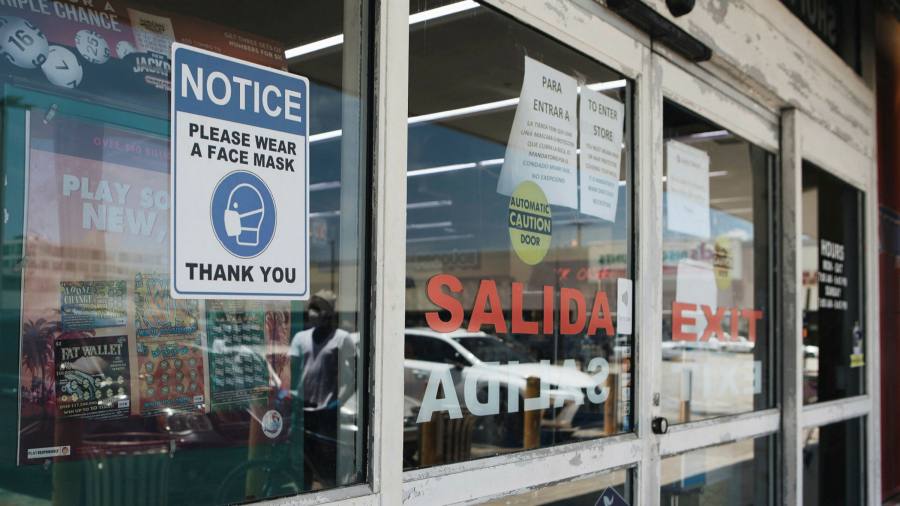 Florida has recorded its biggest single-day increase in coronavirus-related deaths since the start of the pandemic, triggering a market sell-off and raising concerns that the new US outbreak could spark another surge in fatalities.

The total of 120 deaths reported by Florida on Thursday is more than double the 48 recorded the day before and follows weeks of declining fatalities in the state. It comes as several other sunbelt states have recorded sharp increases in deaths.

Texas on Wednesday reported a one-day record for the state of 98 while Arizona reported 75 fatalities on Thursday, more than double the day before. The Arizona tally brings its seven-day average to almost 68, the highest it has been during the pandemic.

Wall Street sold off sharply after Florida announced the new data, reflecting increased nervousness among investors that some of the US’s most populous states may have to reverse economic reopening measures. The benchmark S&P 500 index was down more than 1 per cent in afternoon trading.

The White House for days has sought to temper concerns about the outbreak in southern and western states by noting that it has not been accompanied by a rise in deaths, suggesting that most of the new cases are in younger patients who have survived infections at higher rates.

But the US has seen deaths rise nationwide this week, rising to about 900 a day on both Tuesday and Wednesday after trending lower for weeks.

President Donald Trump has insisted that the rising number of cases is due to more widespread testing, but hospitalisations hit their highest levels since May on Wednesday with 43,000 cases and a rising death toll could further undermine the president’s claims.

Federal officials have cited other data showing that some of the new lockdown measures implemented in Texas, Florida, Arizona and California may be slowing the new outbreak.

The mortality rate in Florida was 1.77 per cent of all cases, down from about 4.3 per cent a month ago and its lowest since April. The number of positive tests reported each day has also fallen from a recent peak of 11,458 on July 4. On Thursday, the state’s health department reported an increase of 8,935 from the previous day.

US vice-president Mike Pence said on Wednesday that the US has seen early indications that “mitigation efforts” are helping to slow the spread of coronavirus in areas where cases have climbed, noting that positivity rates in Florida, Arizona and Texas were flattening.

Deborah Birx, a member of the White House coronavirus task force, said data out of Florida signalled that the number of daily infections in the state may be stabilising.