The Federal Reserve took little action at its meeting this week, but sent plenty of dovish signals to investors — highlighting its worries about the impact of coronavirus on a US recovery, its hopes that Congress will renew fiscal stimulus, and its willingness to add monetary support.

“We’ve got to hope for the best and plan for the worst,” Jay Powell, the chairman of the US central bank, said at his press conference on Wednesday, after a two-day gathering of the Federal Open Market Committee.

“We’re in this until we’re well through it,” he said. “The picture is, you have the lockdown, then you have the reopening, but there’s probably going to be a long tail where a large number of people are going to be struggling to get back to work.”

Mr Powell had been cautious about the prospects of a speedy rebound from the Covid-19 crisis, but his anxieties and those of other Fed officials appeared to have grown in the past few weeks, underpinning their willingness to provide as much of their own stimulus as they can.

“The Fed is committed to keeping its foot on the gas. It has floored it and is still flooring it . . . and there is no indication they will back away from it,” said Tad Rivelle, chief investment officer of fixed income for TCW. “They are scared.”

The Fed’s primary concern is that the resurgence of Covid-19 across many parts of the US has stunted the recovery. For the first time, the FOMC inserted a line in its statement that the fate of the world’s largest economy would “depend significantly on the course of the virus”.

“It’s so fundamental, I think we cannot say it enough, it’s so important,” Mr Powell said.

The second worry is that Congress fails to reach a deal renewing fiscal stimulus at sufficient levels to help the economy. “Fiscal policy is essential here,” Mr Powell said, stressing that the initial $3tn round of stimulus had “really helped”.

“Very likely more will be needed from all of us, and I see Congress negotiating for a new package and I think that’s a good thing,” he said.

Julia Coronado, founder of Macropolicy Perspectives, said: “The most acute near-term problem is the virus and people’s need for cash — things that the Fed can’t address. So there were repeated frequent calls throughout the press conference for additional fiscal support.”

Investors say relatively healthy current market conditions have enabled the Fed to hold off on announcing any substantive adjustments to its monetary policy plans, but Mr Powell hinted those could be coming soon.

The Fed chairman said the US central bank was looking to wrap up a long-awaited review of its monetary policy tools in the “near future”, which could set the stage for its next move by the time it meets again in September. That would be after Mr Powell delivers remarks at the annual Jackson Hole central bank symposium, to be held virtually next month.

Equity prices have rebounded sharply from the lows reached during the turmoil of March, while the dollar has weakened to a two-year low. Real yields, which measure how much a bond returns to investors once the eroding effect of inflation has been stripped out, have also fallen to levels last seen in 2012, signalling that liquidity remains ample.

“I don’t know if there is a sense of urgency that they have to do something right now,” said Eric Stein, co-director of global income at asset manager Eaton Vance.

But investors say the Fed may not have the luxury to wait too long before markets become impatient. “Everyone is centred on September,” said Tom Garretson, senior portfolio strategist at RBC Wealth Management. “If there aren’t more details . . . we could be opened up to a period where markets push back a bit.”

If the Fed bides its time, it is not out of lack of preoccupation. In a sign of its fears that market distress could resurface abruptly, the Fed this week extended the emergency credit facilities it launched at the start of the crisis until year’s end. It also renewed temporary swap lines set up with several central banks to counter dollar shortages until the end of March. 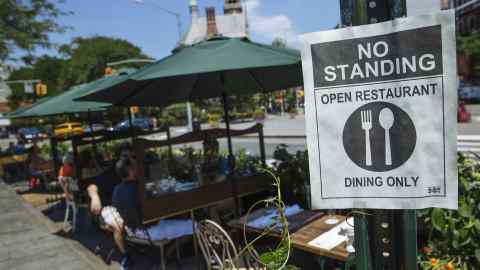 On monetary policy, Mr Powell did not offer any details on a possible next move. One option involves tethering the future path of the federal funds rate to specific economic metrics, like the unemployment rate or inflation rate.

Beyond more explicit forward guidance, there have also been ongoing debates about the usefulness of so-called yield curve control, which was last used in the US during the second world war. It involves the Fed capping yields on certain Treasuries to ensure interest rates remain low.

Mr Garretson said the Fed must also provide more clarity on its asset purchases programme, having pledged to buy an unlimited quantity of government debt in March.

“We moved very quickly and very aggressively early and we’ve been monitoring the situation, and . . . we think our policy is in a good place,” Mr Powell said. “But we’ve looked at adapting our policy as time goes by and we are ready to do that when we think it’s appropriate. I can’t give you a specific trigger. It really just is when we think it would help”.