Amjad Rihan was more than 3,000 miles away from EY’s imposing Dubai skyscraper office when his lawyer called to say he had finally won a seven-year fight against his former employer.

One of the few people to ever take on a prominent accounting firm in court, Mr Rihan had sued EY for forcing him out after he exposed a string of alleged illegal activities by a Dubai gold company and a subsequent cover-up by its auditors.

“I never set out to be a whistleblower but turning a blind eye was not an option,” he said, speaking from the house in Warwick where he eventually landed after fleeing the Middle East.

“Most of the wealth in the world is audited by the ‘Big Four’ accountants. It is not always in the interest of the powerful to point out when something goes wrong.”

It is the first time he has reflected publicly on his story since an English High Court judge ordered EY to pay him $11m in April.

The court accepted claims that EY had participated in accounting misconduct that reached its senior ranks. According to the judgment, the firm colluded with Kaloti Jewellery International to hide illicit exports and helped obscure audit findings that included suspected money laundering. 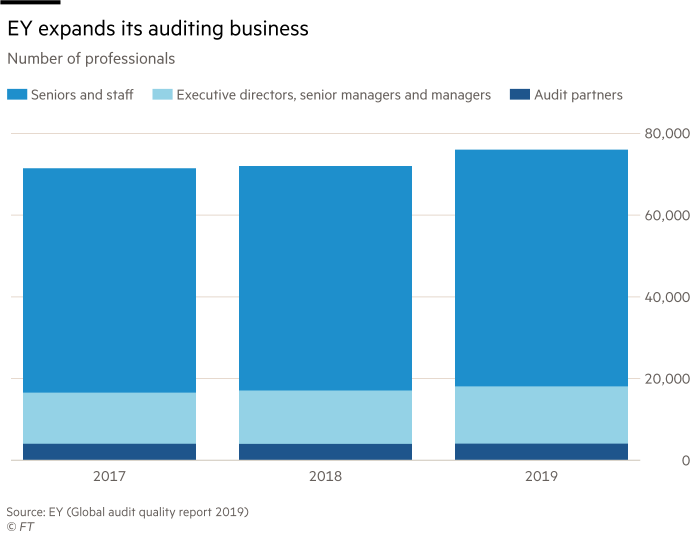 The accounting firm is attempting to appeal the judge’s decision. It claimed Mr Rihan, who became one of EY’s youngest partners aged 36, was a “liar and opportunist”, according to the judge’s summary, and that the allegations were “completely without merit”.

For EY, which made $36bn in revenues last year, the battle to reverse the court order carries considerably more reputational risk than financial.

The Kaloti saga is one of three fires the group is fighting on multiple continents. They have drawn scrutiny to whether the central controls that guard the behaviour of its auditors around the world are failing.

EY is facing a regulatory investigation into its oversight of NMC Health, a collapsed London-listed hospital group headquartered in Abu Dhabi, which looks set to become one of the largest scandals of the FTSE 100. Questions are also mounting about its audits of Wirecard, a Dax 30 fintech business at the centre of what threatens to become one of the largest accounting scandals in German postwar history.

EY’s involvement in these controversies risks straining its influential lobbying spot in British politics just as legislators consider aggressive proposals to break-up big accounting firms to improve the governance and quality of their audits.

Its UK chief, Steve Varley, is the government’s business ambassador for the professional services industry and sits on a Treasury council that informs policies for how businesses operate.

They are also an unpleasant distraction while EY’s UK firm overhauls its leadership and as its international board braces for a significant hit to profits during the coronavirus crisis.

“To get wrapped up in one scandal may be regarded as misfortune, two looks like carelessness. Three, well, it just looks bad doesn’t it,” said a senior lawyer involved in investigations into NMC Health.

Mr Rihan sued four EY entities, including its global and European businesses, in the English courts because he did not believe that responsibility for the Dubai scandal could be contained to the region.

A person close to EY said: “They cannot say it was cultural or isolated, everything is central.”

The ability to maintain quality control at sprawling professional services firms, which operate as a combination of partnerships and franchises, has long been a subject of debate in the sector.

EY has a “global code of conduct”, which purports to manage ethics and behaviour for its 280,000 employees at 700 offices in 150 countries.

The controversies risk straining EY’s influential lobbying spot in British politics. Its UK chief, Steve Varley, is the government’s business ambassador for the professional services industry and sits on a Treasury council that informs policies for how businesses operate © Handout/EY

The benefit of having an exhaustive international network is that clients can be referred to member firms around the world, keeping fees inside the group. The badge of a large global accounting or law firm lends credibility to a small office in a country not known for its regulatory controls. Often firms gather fees on a global scale when the work is good, but shirk liability when a scandal occurs, blaming the governance of the individual office.

“We market ourselves as a global solution and then when a problem crops up we throw in as many firebreaks as possible to put distance between it and the rest of the firm,” admitted a board member of one of the big accounting firms.

Some recent incidents have questioned the efficacy of the model: KPMG’s brand suffered globally when clients and staff deserted the firm in South Africa over its involvement in a corruption scandal, while PwC is being investigated in the UK for alleged misconduct by its Italian office on audit work for telecoms company BT.

For EY, the multinational framework has complicated the three audit crises. All four entities that Mr Rihan sued claimed in court that they were not responsible for how he was treated. The judge rejected the idea. “I agree with the claimant’s submission that EY Dubai and the other locally based EY organisations were subordinate to EY Global,” the ruling said.

EY said after the ruling was handed down that it was “surprised and disappointed”.

“It was the work of an EY Dubai assurance team that uncovered serious irregularities and reported them to the proper authorities,” it said.

Kaloti has previously denied any wrongdoing and said that it conducted all appropriate anti-money laundering checks.

On NMC, EY’s audit was signed off in London, despite the bulk of the company’s trading and assets being in the Middle East. Accounts from 2012 and 2013 show that NMC paid more than half of the audit fees to EY’s United Arab Emirates firm, suggesting that a group of staff in the region took on a significant chunk of the work even after it listed on the London Stock Exchange.

EY is facing a regulatory investigation into its oversight of NMC Health, a collapsed London-listed hospital group headquartered in Abu Dhabi © Christopher Pike/Bloomberg

The UK accounting watchdog announced an investigation into EY’s 2018 audit of NMC last month. At the end of last year, hedge fund Muddy Waters questioned the relationship between EY and NMC, pointing out that the board included former partners of the Big Four firm. It said NMC’s margins were “too good to be true” and that it believed a “cosy relationship” between EY and its client meant there was a “lack of rigour” in its audits.

Now liquidators to the company at the London offices of Alvarez & Marsal and lawyers advising NMC’s board will pull apart years of trading to discover how $4bn of undisclosed debts went undetected. It could expose EY, which earned around £14m for its audits over seven years, to potential allegations of negligence.

EY said it would fully co-operate with the FRC’s inquiry and that it would be inappropriate to comment further on NMC Health.

On Wirecard, the audit work was carried out by EY partners in Germany, who were also responsible for monitoring the group’s operations in Dubai that are at the core of accusations about fraudulent profits.

Wolfgang Schirp, who is preparing a lawsuit aimed at EY on behalf of Wirecard investors, said a recent independent report into its accounts was “truly devastating”. Special auditors at KPMG said they were unable to verify that tens of billions of euros worth of transactions supposedly routed through Dubai, Dublin and Munich actually took place, casting fresh doubt on at least three years of accounts that were given the green light by EY.

“Our audit of Wirecard’s 2019 accounts is ongoing,” EY said. “We have not formed an audit opinion and cannot confirm any conclusions.” Wirecard told investors in May that EY’s work so far had not raised “any material findings. However, not all audit procedures have yet been completed.”

‘Not a dollar lost’

EY told the FT that it understands “our vital role in serving the public interest and fostering trust and confidence in capital markets.

“Audit quality is critical to this and we continuously seek to be globally consistent in delivering high quality audits through investing in technology, training for our people and improving our processes.”

The firm launched a programme in 2015 to improve management and communication for its audit teams. “There is still more to do, and EY is ready to accept that challenge,” said Felice Persico, global chair for assurance, in the firm’s latest report into audit quality.

So far the fallout for the firm has been negligible, despite publicity around Mr Rihan’s case, including a BBC Panorama investigation into “gold, drug money and a major auditor’s ‘cover-up’”.

EY audits 30 per cent of Fortune 500 companies and around 25 per cent of the FTSE 100. It continues to advise governments, with its mandates only growing as the public sector rapidly outsources logistical support to combat the pandemic.

“I don’t think EY has lost a single dollar of business from this,” said an observer.

One former EY partner added: “In terms of the potential damage, the reality is that they will keep going, life for the big accountants just moves on. The financial impact on companies of this scale is only ever petty cash. Their ego may take a hit, but only regulatory change will have any tangible impact.”