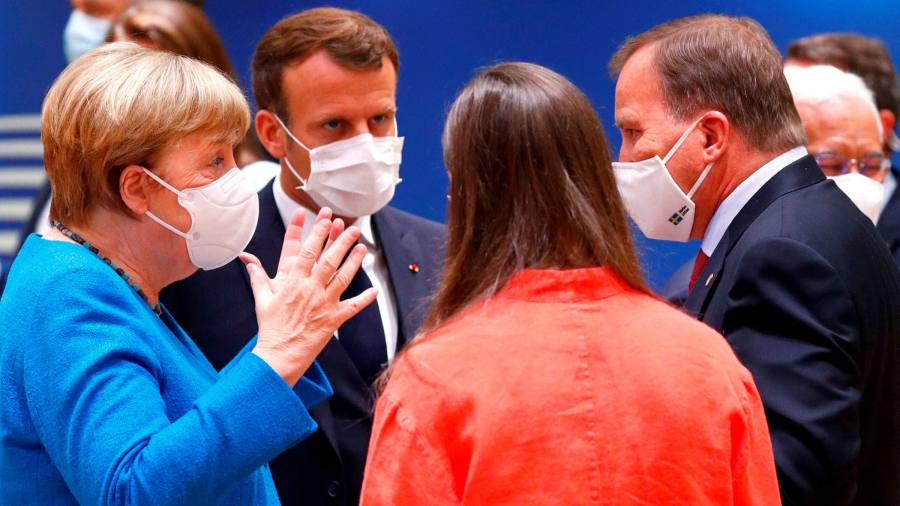 EU chiefs have proposed a plan to break the deadlock over Europe’s proposed €750bn response to the coronavirus pandemic after a night of acrimonious talks among leaders in Brussels.

European Council president Charles Michel published revised plans on Saturday morning that would trim by €50bn the overall amount of grants that would be doled out under the economic recovery package. But he also reinforced a core fund that capitals including Rome and Madrid are most anxious to protect, as he seeks to unblock deadlocked negotiations in Brussels.

Mr Michel’s gambit kicked off the second day of summit negotiations after talks on Friday foundered badly over Dutch demands for tough supervision of how the recovery money is spent. Mark Rutte, the Dutch prime minister, has insisted on a right to unilaterally veto payments to stricken countries if they do not meet reform demands.

The new plan, drafted overnight, offers compromise wording in an attempt to address Mr Rutte’s concerns, offering a single nation the ability to object to payouts to a member state — but only if they do so within a three-day window. The dispute would then need to be resolved by EU finance ministers or referred up to leaders if it could not be concluded.

The new “negotiating box” from Mr Michel is an attempt to prevent leaders’ first face-to-face meeting since February ending in failure, with the credibility of the bloc’s collective response to Covid-19 at stake.

Friday’s talks broke up after 13 hours of negotiations that laid bare division over the rules for doling out hundreds of billions of euros that the EU would borrow on the capitals markets.

Mr Michel’s negotiating box proposes keeping the overall size of the EU’s borrowing plan at €750bn, but shifts the balance between loans and grants.

The cuts to the grants component have been made to programmes that member states had previously signalled that they were willing to sacrifice, including a proposed corporate recapitalisation programme and an initiative to stimulate private investment.

The key area for member states such as Italy, Spain and Poland is the so-called Recovery and Resilience Facility, which is a new scheme that would distribute funding to individual member states. The grants available from this programme have been lifted from €310bn to €325bn in Mr Michel’s new proposal.

Frugal countries such as the Netherlands, Austria, Denmark and Sweden, also get a modest increase in their budget rebate to convince them to sign up to a deal.

One EU diplomat said the proposal “offered something to everyone” and was a “getting closer to something we can discuss”. A diplomat from one of the so-called frugal countries said the draft was “a good first step”.

The first day of talks on Friday dissolved in an ill-tempered dinner as leaders rounded on Mr Rutte over his intransigence on the veto.

The mood was summed up by a heated exchange over dinner when Boyko Borisov, the Bulgarian leader, accused Mr Rutte of wanting to be “the police of Europe” by handing himself the right to decide if countries’ national reform plans were ambitious enough to justify EU financial support.

On Saturday morning Mr Borisov struck a more conciliatory tone, suggesting a deal could be done and saying it was natural that member states that contributed the most to the EU’s funding had an interest in knowing how the money would be spent.

German chancellor Angela Merkel, who holds the EU’s rotating presidency, is anxious to strike a deal on the recovery fund this month before the August break. She acknowledged on Friday that an agreement might not prove possible this weekend, and some capitals thought they might need to return to Brussels for a final push before the end of July.

That view reflects the complexity of the plans under discussion. Not only do they need to settle the size, governance and conditions attached to the recovery fund, but the entire process is linked to the EU’s regular seven-year budget, which runs from 2021 to 2027.

Under the recovery fund component, the EU will be moving into uncharted territory by borrowing on a large scale on the capital markets.

Given the unprecedented nature of the proposals, Mr Rutte has said that the moves to give countries unprecedented grants should come with a greater degree of surveillance than ordinary loans.

Leaders of the countries that have borne the brunt of the pandemic have bristled at the idea of being subject to “Troika-style” monitoring of the kind that was imposed during the eurozone sovereign debt crisis.