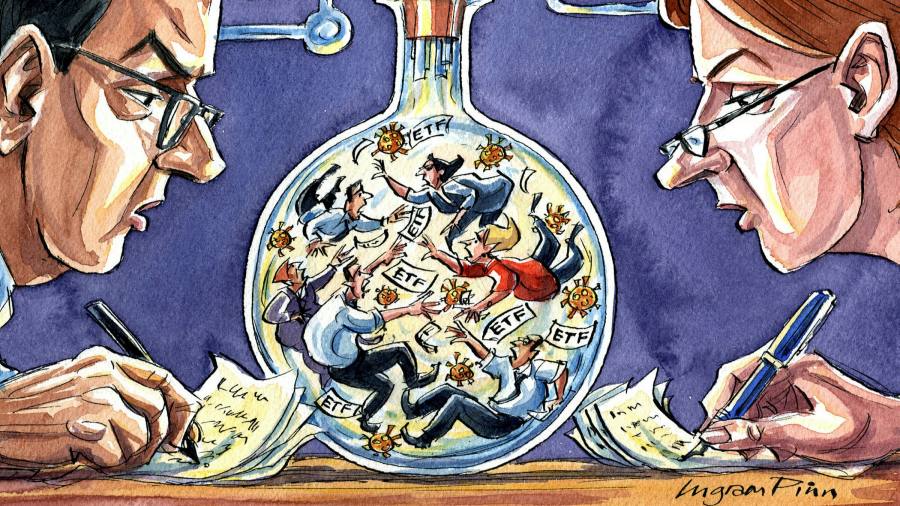 Ever since the 2008 financial crisis, policymakers and pundits have wondered what would happen to the cogs of finance in the next big global market shock.

Now, they have a test case to dissect: the widespread market drama that occurred in March as Covid-19 spread worldwide and economies began locking down. While it is still too early to pass definitive judgment on the overall resilience of banks and finance — since the full tally of Covid-19 pain remains unclear — some curious micro-lessons are emerging that deserve more debate.

Consider fixed-income exchange traded funds, which are financial instruments designed to track an underlying corporate bond index. Back in 2008, when worries centred on corporate credit defaults, regulators and investors tended to focus on banks. That was because big investment banks held vast inventories of corporate bonds and acted as market makers in this sector.

But the post-2008 reforms made it much more expensive for banks to act as market makers, so they sold down their inventories. Many of those holdings were bought by the ETF sector, which has exploded in size since then. “In mid-2007, broker-dealers held $418bn in corporate and foreign bond assets that could be used for market-making activity, but now these holdings account for less than $60bn,” notes Standard and Poor’s. In contrast, ETFs’ corporate bond holdings jumped by more than $500bn in that period.

This has generated good fees for ETF managers and made banks more robust. But it left policymakers worried about market liquidity, too. Market makers have an incentive to keep markets trading in a crisis. However, entities such as ETFs do not, since they essentially operate on autopilot, buying and selling bonds automatically to match an index.

Thus, regulators have fretted that the change in ownership was creating market “fragility”. Even in good times “liquidity in corporate bond markets. appear[ed] less robust” than before, as a report from the Bank for International Settlements notes; in bad times, activity might freeze, it was feared.

Worse, the ETF market went haywire — seemingly confirming the fears. Most notably, in early March, the price of ETFs collapsed so dramatically that the funds lost their link to the prices of the underlying corporate bonds. Some traded at a 5 per cent discount to the value of their underlying assets, in the most extreme moments of dislocation.

That seemed utterly bizarre at the time. However, analysts have subsequently re-examined events with cool heads and two curious points emerge. These are that ETF price swings preceded other market moves, albeit in a more extreme way. Plus, this volatility did not occur because trading dried up; on the contrary, daily ETF trading volumes exploded, running 250 per cent higher than before the crisis, and investor redemptions were very modest in March compared with other asset classes.

Thus, it seems that investors reacted to the corporate bond market freeze by using ETFs to hedge risks, conduct price discovery and dump exposures they disliked. ETFs were thus an investor crutch, not a market block.

Is this use of ETFs sustainable? Sadly, no one knows. On March 23, the Federal Reserve took dramatic action to halt the freeze in corporate credit, announcing big purchases of company bonds. It is possible that if that Fed rescue had not occurred, the funky ETF prices might have eventually caused those structures to fall apart. We will never know.

But investors need to ponder three points in the light of this saga. First, regulators are still grappling with all the unintended consequences of the post-2008 financial reforms.

Second, since these reforms have changed market structures, it would be foolish to think that past models of liquidity provision are a good guide to the future. The March adventure around ETFs provided a benign surprise. But there are less cheering examples to ponder: in March the US Treasuries market also acted extremely strangely, because of hitherto-unrecognised hedge fund exposures.

Third, as market structures change, central banks and regulators need to adapt. The BIS thinks the March events show that ETF “prices are more reactive to market developments than the prices of the underlying bonds are, especially at times of market stress”. Thus, it believes that ETF “prices are probably more suitable inputs to monitoring efforts and to risk management models, including those underpinning regulatory capital calculations, than relatively stale bond benchmarks”.

That will not please anyone who fears that ETF managers are already far too influential for their own good. But the BIS assessment seems realistic. Or to put it another way, what the Covid-19 market shock has shown is that while the banks played a starring role in the last big financial crisis, non-bank financial structures, such as ETFs, matter much more now, and not just in the corporate bond world. That means ETFs deserve more scrutiny and debate — from politicians, as well as investors.