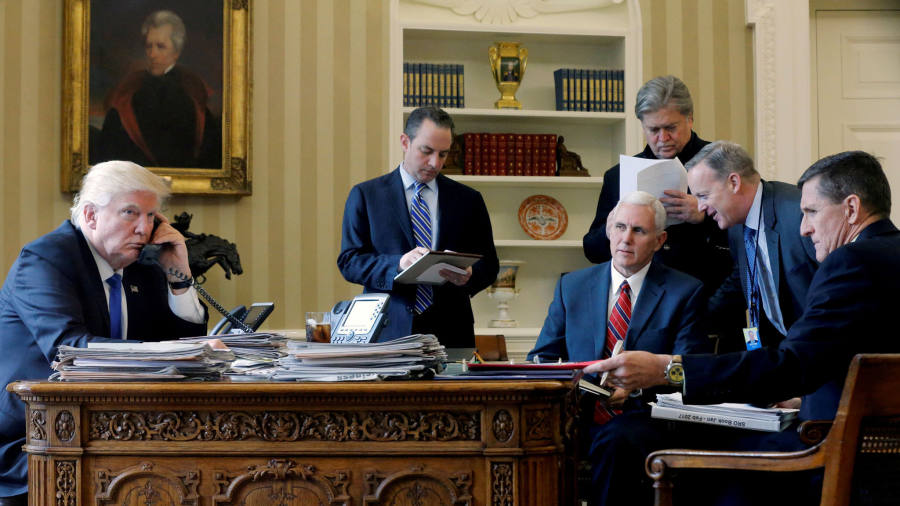 It is one thing for a US president to pardon a criminal friend.

Donald Trump has used that power on behalf of Joe Arpaio, the Arizona sheriff convicted for racially profiling Hispanics; Rod Blagojevich, the former Illinois governor jailed for trying to sell a Senate seat; and Eddie Gallagher, the navy Seal who was “OK with killing anything that moved”, according to fellow Iraq war veterans. Such exonerations are offensive but precedented.

It is another for the US Department of Justice to act on the personal whim of an American president. The only parallel to the DoJ run by Bill Barr, the US attorney-general, is the one that served Richard Nixon.

Mr Barr’s decision on Thursday to throw out the criminal charges against Michael Flynn, the retired lieutenant-general who served as Mr Trump’s national security adviser, portends far more than the move itself. “I wouldn’t be surprised if you see a lot of things happening in the next few weeks,” said Mr Trump shortly after Mr Barr’s move.

Mr Flynn had been indicted by the FBI on two counts of perjury, having lied about multiple conversations with the Russian ambassador to the US during the transition before Mr Trump took office. Mr Flynn also failed to disclose he had been working for the Turkish government as a well-paid lobbyist. He originally pleaded guilty to “wilfully and knowingly” lying to the FBI — a crime that entailed a six-month jail sentence.

The real change was that Mr Barr was now in the driving seat. His appointment a few weeks earlier gave Mr Flynn a new cause for hope. Mr Barr pre-empted the contents of the Mueller report by saying it had “exonerated” Mr Trump. In fact, the report had listed 10 counts of possible obstruction of justice by the president.

One of those counts was Mr Trump’s attempts to arm-twist Jim Comey, the FBI director, to drop the bureau’s investigation into Mr Flynn two years earlier. That attempt failed. But it lived to see another day. Mr Flynn’s patient loyalty was rewarded by Mr Barr on Thursday.

Ordinarily, attorneys-general try to uphold the law while advancing the policy goals of their president. A better parallel for Mr Barr’s role is that of Thomas Hagen, the family lawyer to the Corleones in ‘The Godfather’movies

The bigger question is what will follow the Flynn move. Mr Barr’s goals are two-fold. The first is to repay those who have stayed loyal to Mr Trump. He may be unable to overturn the conviction of Paul Manafort, the former Trump campaign manager, who is serving a seven-and-a-half year sentence for a litany of convictions including fraud, witness tampering and perjury. Mr Manafort is likelier material for a presidential pardon.

The same applies to Roger Stone, Mr Trump’s all-purpose consiglieri, who has also been convicted of perjury, witness tampering and other crimes. Mr Barr already intervened to dramatically reduce the sentencing guideline for Mr Stone — prompting the resignation of all four DoJ prosecutors.

Mr Barr can more freely indulge Mr Trump’s second instinct, which is to retaliate against people who helped the Mueller investigation. Mr Trump has referred to the FBI investigators as having committed “treason” and as “human scum”. Mr Barr dismissed a report by the FBI’s inspector-general — its independent watchdog — that said the agency’s investigations had not been tainted by bias. He has set up his own counter inquiry to investigate the FBI.

An even bigger question is what role Mr Barr will play in the US election. Ordinarily, attorneys-general try to uphold the law while advancing the policy goals of their president. A better parallel for Mr Barr’s role is that of Thomas Hagen, the family lawyer to the Corleones in The Godfather movies.

“It is a small step from using the law as a shield to protect the president to using it as a sword to go after his political opponents,” said Ian Bassin, head of Protect Democracy, a group that is looking at how the US election field might be tilted in November. “Barr has done the former repeatedly, first with Roger Stone and now with Flynn. Everyone at the DoJ should resist these efforts, blow the whistle where appropriate, and resign, if necessary, to uphold their oath to our constitution.”