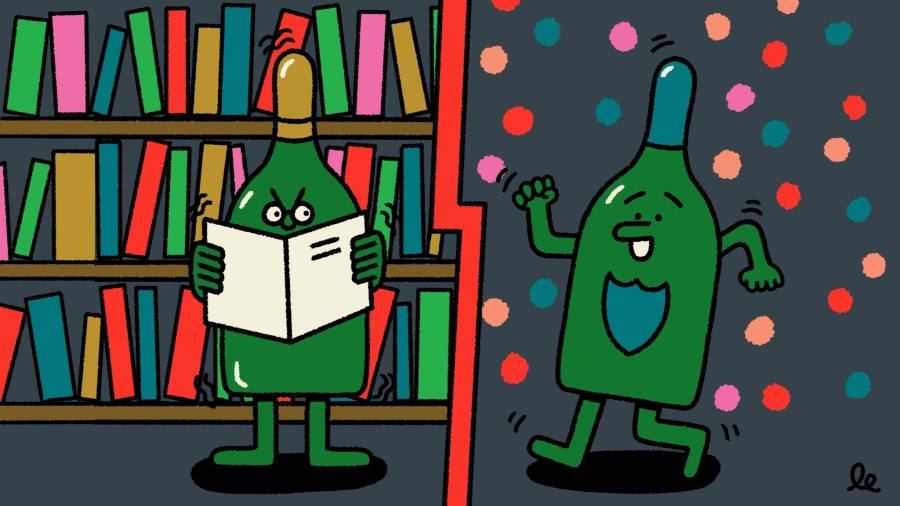 Dom Pérignon or Krug? The ultimate first world problem. Yet the rivalry between these two prestige champagnes from LVMH, the luxury brand owner par excellence, is fun to observe, even if you’d never dream of spending £150 on a bottle. And each has a new winemaker charged with maintaining their differences.

Dom Pérignon has always been an in-house brand, the top-of-the-line creation of Moët & Chandon. It is named after the monk who is supposed to have “invented” champagne and is now based in his abbey, the Abbaye d’Hautvillers.

Dom Pérignon is all about image rather than detail. Perish the thought that any LVMH employee would divulge quite how many millions of bottles are made of it. The marvel is how delicious it is despite the volume — downright gulpable the minute each vintage-dated cuvée is launched, and yet it lasts so well that late-release versions (known as P2 and P3) are now available too. You really can smell its distinctive aroma of lemon mousse concentrate from across a room.

Just don’t try to push the winemaking team for much information. As a fellow champagne-loving Master of Wine observed to me recently: “I suspect that you, like me, always enjoyed hearing Richard G dodge winemaking questions.”

Richard G is Richard Geoffroy, who retired in 2018 as the man in charge of Dom P. His former role involved not just overseeing the crucial blending of the base still wines but an exhausting schedule of travelling the world to present the eventual sparkling results.

Geoffroy’s place has been taken by Vincent Chaperon, 44, who worked with him on Dom Pérignon for 13 years and may be one of the few people in the world to be relieved that the pandemic has brought travel to a halt. He spoke to me from an empty chamber in the Abbaye d’Hautvillers via Zoom about the 2010 vintage, which is just about to be released.

Stepping into Geoffroy’s shoes means being responsible for wine production throughout the vast Moët & Chandon champagne empire, a massively demanding position even without the travelling. “Coronavirus arrived at just the right time for me,” he says.

He wanted to talk about 2010 in Champagne. It’s not one of the region’s most celebrated vintages, with rampant rot in many vineyards colouring the general perception of it. But Chaperon is convinced “it’s one of the forgotten vintages of Champagne”.

Ten years ago, he was in a much lowlier position, overseeing picking strategy. He was constantly checking the vines. In particular, he remembers the weekend of September 4 and 5, dodging in out of vineyards so often that he never bothered to lock his car. His laptop was stolen.

At that stage, the rot that would particularly badly affect Pinot Noir vines was not too widespread. But he intuited, partly through continuous observation and partly from earlier reports from the south of France, that the risk was much higher than the general perception in the Champagne region at that time and he instructed the vineyard team to inspect the vines daily with extreme vigilance.

As a result, they were able to map the incidence of rot in detail and decide exactly which plots were not worth picking. They rejected about 15 per cent of the potential crop. “Lots of people missed the 2010 vintage,” he says, “but picking is like a sport. You have to be in the zone.”

I have no way of knowing how accurate his account is, but the 2010 is certainly a success and I am convinced that Chaperon is as perfect — and on-message — an ambassador for Dom Pérignon as Geoffroy was. Chapeau Chaperon!

Krug, which was absorbed into the LVMH stable in 1999, is quite a different kettle of fish. A much more intellectual wine that is aimed at geeky connoisseurs, it has always been represented by an actual Krug — sixth-generation Olivier, at present — who darts around the world spreading the gospel of Krugisme and sharing winemaking detail to an eye-watering extent.

Presenting the latest version of its principal wine, the 168th edition of Grande Cuvée, from his office on Zoom, Olivier Krug lamented: “This is the first time in 30 years that I haven’t had a plane ticket on my desk. It’s a bit depressing.”

Julie Cavil, Krug’s new chef de cave, presented even more technical background to the complex blend of the 168th edition and recounted how she was recruited to this celebrated champagne house. (She had originally worked in a Paris ad agency before she got the wine bug.)

“It was 2006 and it was my seventh interview with Olivier’s uncle Rémi Krug [his tireless predecessor as the family’s chief salesman]. Finally Rémi came into the room with a bottle of champagne, so I thought now at last we’re going to celebrate my appointment. But no. What he said was, ‘OK, Julie. Make me dream about this champagne.’”

Like Chaperon, Cavil, 46, started in the vineyards. Her first assignment was to oversee the harvest in the Krug’s walled vineyard Clos du Mesnil, whose Chardonnay is bottled separately and sells for about £1,000 a bottle.

Although Krug sells a vintage-dated Brut, one gets the impression that what they are really interested in, chez Krug, is its non-vintage Grande Cuvée, which is so much more complicated to make, involving multiple tastings of hundreds of possible ingredients.

From 2006, Cavil worked closely with Krug’s chef de cave Eric Lebel: “He was on the stage and I was backstage.” She admits to being nervous when she was first allowed to take part in the all-important tasting committee.

But she must have shown some ability since she took over from Lebel at the beginning of this year and is now in charge of creating Krug’s champagnes. Tasting generally takes five months and she had just got down to deciding on the final blend for the 175th edition of Grande Cuvée when the house was locked down.

Still she had 4,000 tasting notes on her specially designed Krug app (when this was excitedly described to me during a visit in 2016, I sensed they were none too keen to share it with the Dom Pérignon team) and managed to complete the task in double-quick time, helped by five others in three different rooms. “I’ll have lots of tales to tell when the 175th is released in eight or 10 years’ time,” she says.

I once drove past Château de Saran, Moët’s hospitality centre, with Olivier Krug. “I’ve never been there,” he told me with some pride.