Polls in key states, combined with changing demographics and bleak forecasts for a pandemic-induced recession, give an early snapshot of how the presidential race appears to be lining up in favour of former vice-president Joe Biden.

With just under six months to go before the US presidential election, Mr Biden, the Democratic party’s presumptive nominee, is polling ahead of incumbent Republican president Donald Trump in key swing states.

These include Michigan, Pennsylvania and Wisconsin — three of the closest states in 2016 that propelled Mr Trump to victory. In Michigan and Pennsylvania, Mr Biden’s polling lead averages more than 5 percentage points.

What are swing states?

On average, national polls put Mr Biden at a 5.3 point lead over Mr Trump, according to RealClearPolitics. The presidential election is not simply decided by a national vote, however. In 2016, Hillary Clinton won the popular vote by 2 points, but Mr Trump won the election by winning the majority of electoral votes. 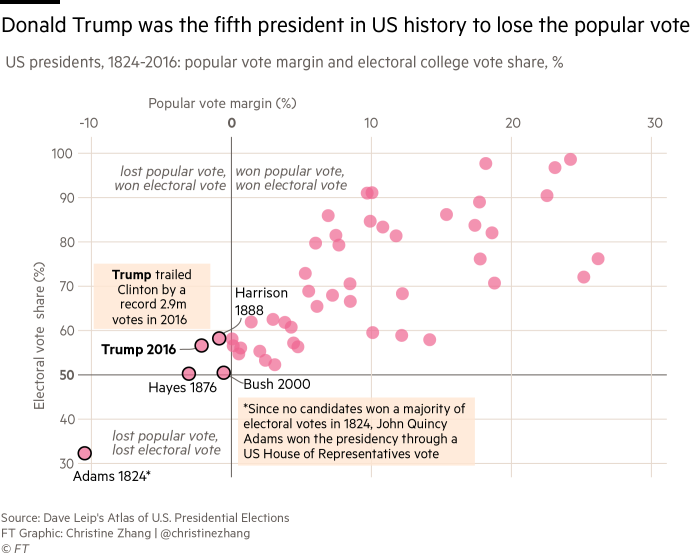 Because of the electoral college system, who wins the White House will probably come down to a few so-called “swing” or “battleground” states.

To win the presidency, candidates must win a majority, or 270, of the 538 votes in the electoral college. Except for Maine and Nebraska, which also award electoral votes for their congressional districts, it is a winner-takes-all approach, with the victor of the popular vote in each state getting all of that state’s electoral votes.

Because most states have voted for the same party since 2000, they are often written off as “solid” Democratic or Republican states. The rest are “battlegrounds”, where the two parties tend to be evenly matched. Because they could go either way, such states have the potential to “swing” the balance of electoral votes in favour of one candidate over the other.

Florida (29 electoral votes) and Ohio (18) have long been considered key swing states that candidates must win in order to win the presidency, in part because of their large electoral vote hauls.

But 2016’s unconventional election has forced analysts to reconsider the traditional electoral terrain.

In the Midwest, Mr Trump flipped Michigan (16 electoral votes), Pennsylvania (20) and Wisconsin (10), all of which had voted Democratic for decades.

Arguably the most important state in the election, Wisconsin was 2016’s “tipping point”, pushing Mr Trump over the 270 electoral vote threshold. In other words, even if Mrs Clinton had won Pennsylvania and Michigan, she still would have needed Wisconsin to win the presidency. Wisconsin — which had not backed a Republican contender since Ronald Reagan in 1984 — had only been a “tipping point” state once before, in 1976.

Analysts now see Arizona (11 electoral votes), where Mr Trump eked out a 3.7 point win over Hillary Clinton, as a possible toss-up state for the first time in years — it has not voted for a Democrat since Bill Clinton’s re-election attempt in 1996.

Even using history as a guide, it is difficult to provide a definitive list of swing states at this stage. As in 2016, when few would have guessed the election would come down to Wisconsin, it is impossible to say for certain which states will be this year’s most pivotal until the votes are cast.

What do polls say?

One way of capturing election dynamics as they happen is through polling averages, as results from statewide polls trickle in.

Presently, there are nine states with recent polls where the spread between Mr Biden and Mr Trump is less than 6 points.

In Pennsylvania (20 electoral votes, not shown on chart), which also flipped from Democratic to Republican in 2016, Mr Biden’s polling average jumped to 6.5 points in recent weeks, buoyed by a Fox News poll from April 18-20 giving him an 8-point lead.

But early polls at the state level can be misleading. In 2016, Mrs Clinton averaged a more than 7-point lead in Pennsylvania at a similar stage in the race, mainly due to an NBC/Wall Street Journal/Marist poll from April 18-20 putting her 15 points ahead of Mr Trump.

How demographics come into play

White voters without a college degree — a key demographic for Mr Trump in 2016 — are projected to decline. In the case of Michigan and Ohio, the projected decline outpaces that of the nation.

States will also grapple with the impact of coronavirus on their populations.

Michigan has reported more than 4,000 deaths due to coronavirus, the highest among swing states and the third-highest in the US as of May 5 — and the death toll is projected to increase.

Much of this comes down to the city of Detroit, which accounts for more than a quarter of the death toll and has quickly emerged as the state’s epicentre for the crisis largely due to its high poverty rate.

The state’s coronavirus statistics also highlight racial disparities. Black residents make up 14 per cent of the population but 32 per cent of cases and 41 per cent of deaths.

A coronavirus recession could be a major factor

Many swing states’ economies are projected to fare poorly in the second quarter as a consequence of lockdowns, working against the incumbent president.

Some states, such as Ohio and Texas, are moving to gradually reopen their economies. Though new cases appear to be plateauing, testing rates in both states are among the lowest in the US.

In Nevada and Florida, a decline in tourism is to blame for second-quarter GDP forecasts of minus 36 per cent and minus 33 per cent respectively, according to StratoDem Analytics. These two states had stay-at-home orders until the end of April without detailed plans for reopening, though some restrictions have lifted.

Nationally second-quarter GDP is projected to be down 29 per cent, and most swing states will see a deeper decline than that.

The shutdown of national manufacturing and oil industry employers in Michigan and Texas has resulted in more than 1m unemployment claims cumulatively in the last four weeks in each state.

The recovery will largely depend on how quickly states are able to reopen and could taint the view of Mr Trump’s handling of the coronavirus response.

This article has been amended since publication to reflect the fact that the number of unemployment claims is 1m, and not 1bn as originally stated.