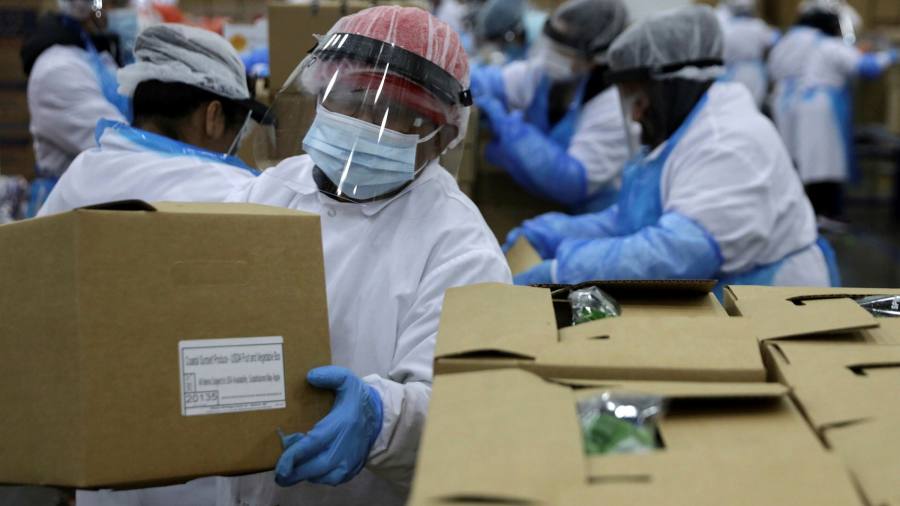 Democrats say the Trump administration is continuing to deny food aid to seven northeastern US states — none of which voted for the president.

Of the $1.5bn awarded by the US Department of Agriculture in the second round of its programme only $57.7m, or less than 4 per cent, went to food distributors serving its north-eastern region — New York, Connecticut, Rhode Island, Massachusetts, Vermont, New Hampshire and Maine.

Those states represent roughly a tenth of the US population. None of the seven voted for Donald Trump in the 2016 election.

In an earlier round of funding, less than 5 per cent of contracts were awarded to groups serving the northeastern region.

In a new letter, more than a dozen Democratic lawmakers accuse the administration of continuing to neglect some of the states that have been among the worst-hit by the pandemic.

“The rushed and non-transparent process that the USDA used to award food distribution contracts has resulted in a highly inequitable programme that does not reflect need,” the House representatives, led by Reps Paul Tonko and Antonio Delgado, wrote in a letter to Agriculture Secretary Sonny Perdue.

The USDA’s Farmers to Families food box programme was designed to benefit both American farmers, many of whom could no longer sell all their food during the pandemic, and the growing number of struggling Americans whose economic situation worsened during the pandemic.

However, the programme has been criticised for shutting out specific regions, and for initially awarding multimillion-dollar contracts to firms with little experience, including a San Antonio wedding planner and a California-based financial services provider.

While some US food banks say they have benefited from the programme, Feeding America — the largest US hunger relief organisation with 200 food banks — has raised concerns that certain food banks and states have been shut out.

“The programme has great potential and I believe it has worked well for some food banks, but it is not living up to its potential in our area,” said Mark Quandt, director of the north-east Regional Food Bank.

The USDA said the agency had selected contractors based on the technical information in their bid, the contractors’ past performance, their capability to perform and their pricing.

In the second round, the agency had granted contracts to several new vendors — including three in the north-east region — “to focus on improving distribution and access to underserved areas”, the agency said, adding that it would continue to focus on “expanding access” to the programme.

Mr Tonko, a Democratic congressman from New York, said Congress had made “several efforts . . . to raise concerns with USDA”, but still had not received satisfactory answers from the agency.

“The Trump Administration could easily have remedied these issues of inequity and transparency. Instead they have chosen to double down on their obvious and puzzling mismanagement of this vital food assistance programme in the middle of our nation’s worsening Covid-19 epidemic,” he said.

“I cannot fathom why USDA continues to exclude local food banks that are already set up to do this work in support of the neediest among us. Instead, USDA has chosen to award lucrative food distribution contracts to small out-of-state companies that have little or no presence or capacity here,” he added.