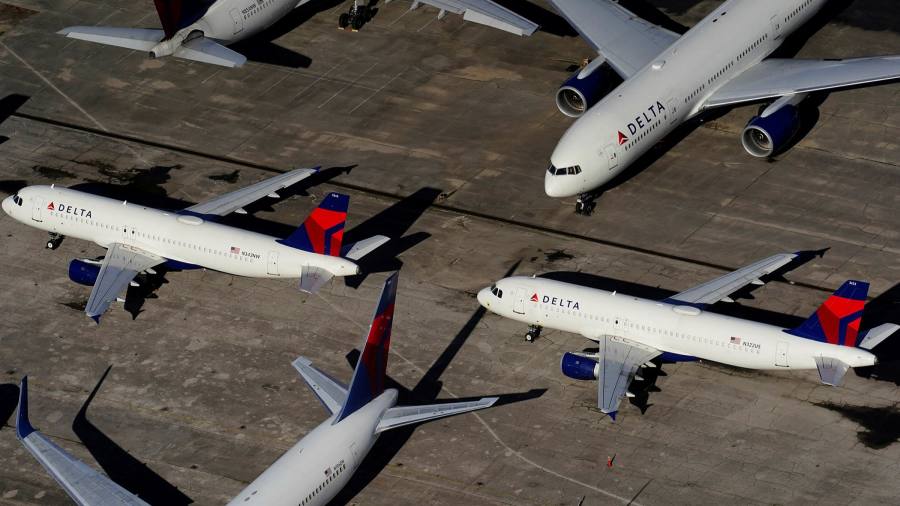 Delta Air Lines is to shed at least 15,000 employees through early retirement, an uptake the company said would allow it to impose fewer furloughs than US rivals in a sector upended by the pandemic.

The Atlanta-based carrier on Tuesday reported a $7bn pre-tax loss in the second quarter, the second largest in its history. Operating revenue tumbled 88 per cent from a year earlier to $1.5bn.

The US airline industry, reeling from a collapse in demand because of the coronavirus crisis, has agreed not to cut jobs or pay until October as part of a $50bn government aid package.

However, its biggest rivals have warned of drastic job cuts once the assistance ends. American Airlines said this month it would have to “right-size” its frontline workforce, with up to 30 per cent of jobs no longer necessary, while United Airlines has sent furlough notices to 45 per cent of its US employees.

Delta employs 91,000 people. Ed Bastian, chief executive, said the retirements and the 45,000 employees who have opted for voluntary leave would allow it to scale back with fewer furloughs than competitors.

“When you put that all together, any furlough at Delta will be much smaller than the numbers at United or American,” he said.

Joe Caiado, analyst at Credit Suisse, said in a note that he estimated that Delta would fly 25 per cent less in summer 2021 than in summer 2019, meaning it would need 25 per cent fewer employees. That is the equivalent of 22,750 full-time employees, or 7,750 more than the cuts achieved through early retirement.

The mammoth second-quarter loss followed a pre-tax loss of $607m in the first quarter, as the virus and accompanying lockdowns began to hit global travel.

Adjusted diluted loss per share in the second quarter totalled $4.43, worse than the $4.16 expected by analysts polled by FactSet.

The company averaged $43m in daily cash burn for the quarter, although it had fallen to $27m by the end of June.

The airline took $5.9bn in charges, including $2.5bn to retire older planes in its fleet, $1.3bn to recognise revenue from the US government’s bailout package and $2.1bn for the loss of value in airlines in which it held equity stakes. Latam Airlines and Grupo Aeroméxico have both filed for bankruptcy protection, while Delta wrote down its investment in Virgin Atlantic by $200m.

Delta has allowed the struggling airline to defer £400m in payments but Mr Bastian said it would provide no further assistance.

Delta reported $15.7bn in liquidity at the end of June, having raised $11bn during the quarter at a blended average interest rate of 6.5 per cent.

Mr Bastian said that while some business travel had gone for good because corporate flyers had grown accustomed to video conferencing, it was not a “material” loss.