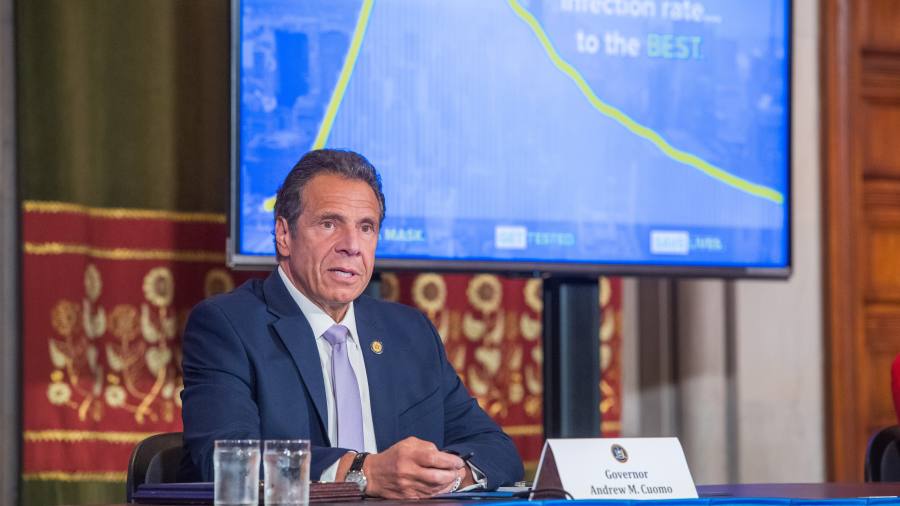 Andrew Cuomo held the last of 111 consecutive daily coronavirus briefings on Friday, with the New York governor declaring the outbreak controlled — if not entirely vanquished — in a state that had become one of the hardest-hit regions in the world.

The governor promised he was “not going anywhere.” But his decision to step away from daily appearances that had become a symbol of the nation’s worst public health crisis in modern history came as New York City — which suffered more than 20,000 Covid-related deaths — was set to enter its second phase of reopening on Monday.

“Over the last three months, we have done the impossible,” Mr Cuomo said.

In fact, Mr Cuomo’s staff is now weighing a quarantine order on visitors from Florida, which irked New Yorkers in March by imposing similar conditions on New York visitors — but now finds itself struggling to contain its own outbreak.

New York’s statewide daily death toll, which peaked at more than 800 in April, has now fallen to 25. At 1,284, Covid-related hospitalisations are at their lowest since the crisis began.

“I will still do what I do. We just don’t have to do it every day,” Mr Cuomo said of his decision to end the briefing. “And that’s a good thing.”

The governor presented maps and bar charts detailing the virus’ spread across the state and — after 42 days — its steady decline. In addition to imploring New Yorkers to “flatten the curve” of infection, he also provided homespun wisdom about Italian-American Sunday dinners, spaghetti sauce and fatherly advice on how to handle a daughter’s new boyfriend.

Some 59m viewers tuned in over the past three months, earning Mr Cuomo comparisons to Franklin Delano Roosevelt’s reassuring “fireside chats” during the Great Depression.

Critics of President Donald Trump used Mr Cuomo’s “just the facts” performance as a way to contrast his steady performance to the White House, which offered confusing and often contradictory messages about the pandemic.

As his star rose, swooning Democrats even speculated about drafting the governor as a replacement for Joe Biden as the party’s presidential candidate — a notion Mr Cuomo repeatedly sought to quash.

In dramatic terms, the high point of the briefing may have been the cameo appearances of Mr Cuomo’s brother, Chris, a CNN anchor who was infected with coronavirus in April. At one point, from his basement quarantine, Chris Cuomo recounted a fever dream in which he appealed to his big brother to cure him.

Political foes, and some critics, found the theatrics excessive. They also challenged the triumphant narrative of the governor’s crisis response by focusing on his order for New York nursing homes to accept Covid-19 patients.

That order was later rescinded, but only after the state’s nursing homes became one of the worst killing grounds for the virus. Mr Cuomo said he had been following federal guidance.

The briefing provided some insight into several governors’ increasingly vexed relationship with Mr Trump, another Queens-born politician. One day, Mr Cuomo would blast the White House for failing to send ventilators, and therefore risking New Yorkers’ health. On other occasions he offered fulsome thanks to the president for his support.

In Friday’s final session, Mr Cuomo struck a sombre tone and returned to the themes of unity and solidarity he has emphasised over the past three months — themes that make him sound like a national political candidate.

“We learnt that our better angels are stronger than our demons,” Mr Cuomo said at one point. “We will be better and we will be stronger for what we’ve gone through.”

Amid a polarised national debate over the pandemic response, Mr Cuomo also pleaded for other states to follow New York’s example of reopening their economies only gradually, guided by public health data and science.

“Today, we are seeing the virus spreading in many places. More people will die,” the governor said, “and it doesn’t have to be that way.”