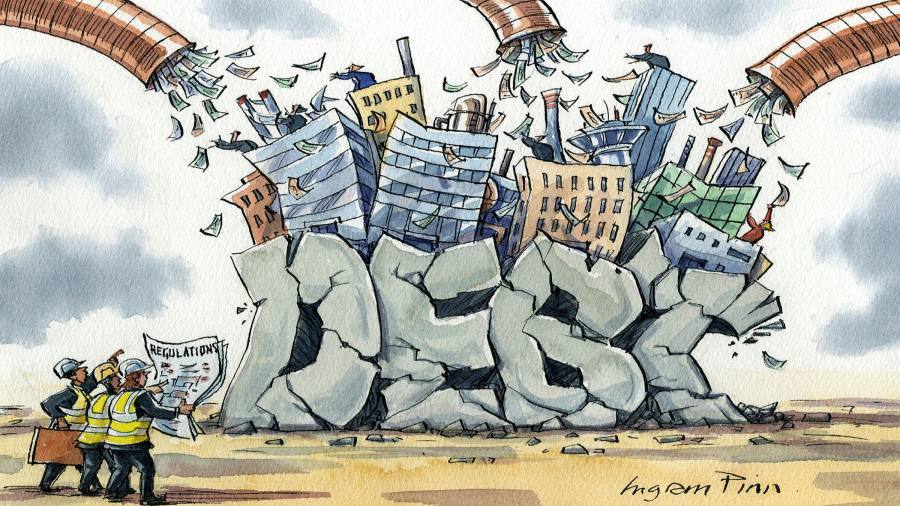 The popular backlash is certainly tame so far: a bit of sniping about companies paying executives or shareholders too generously, while accepting government furlough payments.

The policymaker backlash is less evident still. The idea that companies might have made themselves vulnerable to disaster through aggressive management, or that shareholders or regulators should intervene to de-risk them, has not even been raised. It should be.

By contrast, when world leaders bailed out the banks in 2008 with cheap funding and government equity, there was an outcry. Logical though the rescues were, because commerce as a whole cannot function without a banking system, there was a widespread perception that hundreds of billions of dollars had been handed to the undeserving rich. The Occupy Wall Street protest movement was spawned. And the societal inequality that was compounded by the crash, and the policy response to it, spurred populist politicians across the western world.

There were injustices in the 2008 bailouts. Unscrupulous bankers did their reputations no favours by securing large bonus payouts when the ink was barely dry on the bailout cheques. Many bank bosses, unhumbled by the bust-and-bailout experience, just redoubled their clout atop expanded institutions.

But for all the frustrated popular outrage, there was, as any banker would tell you, a significant programme of payback via the regulatory crackdown that followed.

Most banks are inherently leveraged institutions: they fund their lending by borrowing money — from depositors, bond markets and elsewhere. Very little of the money used in their operations is actually loss-absorbing shareholder equity. In the boom years before the crash, banks and those who set their terms of trade had become blind to the growing risks that this created.

By 2008, according to the Federal Reserve, the proportion of assets backed by equity capital had fallen below 5 per cent at the big US banks. By last year, as regulators around the world toughened banks’ capital requirements, that US ratio had risen to 9 per cent.

Another post-crisis reform was to insist on closer ongoing scrutiny, particularly through the application of regular stress tests. Disaster scenarios are run through banks’ books to ensure buffers are strong enough.

A third area of regulatory tightening, applied most rigorously in the UK, involved new regimes to hold managers to account.

The Covid-19 crisis will be a big test of these new regulations, as the full force of economic decline and mass unemployment weighs on banks’ balance sheets in the months and years ahead. However deep the recession proves to be, it is clear that banks are far better buffered than they were going into the global financial crisis — and may yet come through this one more or less intact.

Many companies will not — and for the same underlying reason that banks failed in 2008: excessive leverage. It is easy to dismiss the pandemic as a freak event that no one could have foreseen. But the triggers of most crises are unpredictable. The key is to be able to withstand the storm.

Corporate leverage is not just about aggressive financing. The whole system of corporate “best practice”, involving just-in-time deliveries, minimal inventory and the use of gig workers in place of expensive permanent staff, is an exercise in operational leverage.

Add to that the growing financial gearing evident across the corporate world. According to Goldman Sachs, the ratio of net debt to operating profits across the S&P 500 has soared to nearly 2.2, more than double the 2008 level, when finance companies are excluded. Corporate leverage will have spiked far higher given the collapse in profits and extra debt taken on during the coronavirus crisis.

On January 7 this year, the Banque de France published a paper about the systemic risk posed by large companies and their increasing indebtedness — the same day incidentally that scientists in China isolated the new coronavirus.

Few could have imagined the extent of the global public health emergency and economic crisis that Covid-19 would unleash. But the vulnerability of the corporate world was obvious to anyone who paused to think, as France’s central bank did. “To what extent can high debt levels among certain firms be considered a source of systemic risk?” its paper asked.

The study endorsed an earlier decision by French financial regulators to limit big banks’ exposure to the most indebted companies, on grounds of systemic risk. Other markets have a less interventionist culture. But it may be both feasible and desirable to go further than the French.

Bank regulation was toughened when it became clear that public funds were needed to prop up a systemically vital sector. Now companies have been granted a similar handout, and been proved systemically vital as employers and drivers of the economy, there is a strong argument to take a similar regulatory approach: curtail aggressive leverage, stress test regularly and hold managers accountable.